Captain Sam Vimes of the Ankh-Morpork City Watch is not a happy man. He has a thankless job, a bunch of incompetent subordinates and he doesn't get no respect or, more accurately, actually gets no respect. The arrival of a fresh, eager-eyed new recruit (a six-foot-tall dwarf named Carrot - long story) whose relaxed and literal approach to policing (such arresting the head of the Thieves' Guild for being a thief) is another headache for Vimes to deal with. At the same time, the Unseen University Librarian is upset over the theft of a book that could be used to summon dragons and, in an almost certainly unrelated incident, people over the city are vanishing, leaving behind only fine traces of ash and scorched brickwork. Yes, things are definitely afoot... 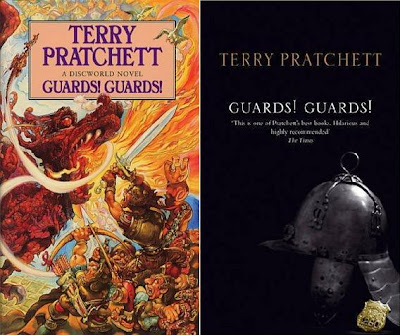 Guards! Guards! is Terry Pratchett's tribute to detective novels and all those hapless extras dressed in chainmail who's only job in films is to run into the grand hall and get cut down by the hero. No-one ever seems to ask them if they want to or not. Oh yeah, and possibly dissatisfied with the imaginary dragons of The Colour of Magic, Pratchett cuts loose here with the real deal, a fire-breathing behemoth of a creature who is permanently in a bad mood. The book's real success is bringing the great city of Ankh-Morpork to life as never before seen in the series, giving the city a real sense of life (and frequent, screaming death) and community. In various polls over the years, Ankh-Morpork usually tops out as the most detailed and convincing fantasy city ever created, and Guards! Guards! is really where the city starts getting its character and identity.

On the cast side of things, a whole slew of major Discworld characters are introduced, most notably the complex Captain Vimes (almost certainly Pratchett's most fully-realised character), Nobby Nobbs (the missing link between man and rat), Sergeant Colon, recruit Carrot, the formidable Lady Ramkin, Detritus the troll and, of course, Cut-Me-Own-Throat Dibbler, purveyor of dubious sausage-in-a-bun products to crowds and/or rioters. Established characters like the Patrician also get a lot more screen-time and characterisation than previously established, and the revelation of how the Patrician ensures he can survive any palace coup launched against him is simultaneously hilarious and deeply disturbing. Despite temporal evidence to the contrary, I am convinced Machiavelli was one of the Patrician's students who didn't quite measure up. 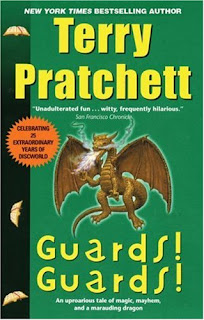 Pratchett's writing takes another significant upward swing with this volume, exuding a greater level of confidence than ever before. He's funny when he wants to be, dramatic when he needs to be, even touching when it is required. The story threads are laid out, developed and then resolved with impressive efficiency and maximum impact. The way the last few paragraphs hilariously resolve very minor story points from a hundred pages previously is very clever. Particularly nicely done are Carrot's letters back home. Read them one after the other and you can see how his attitude to the Big City changes over the course of the book in a very well-done manner.

Guards! Guards! (*****) is not the best Discworld book, but it's certainly right up there. Funny, dramatic and just brilliantly entertaining from start to finish. The book is available now in the UK and USA.
Posted by Adam Whitehead at 16:14

Keep up the great work on the blog, you have great taste, (ie very similar to mine), and it appears, an ability to eat books without mercy. Thanks for helping me weed out the dross and head for the gems.

(maybe sadly) I check your site everyday to see what you're reviewing, and ineviatably enjoy it..

Night Watch is the best. Although, I have a soft spot for The Thief of Time - due to the sayings of Ms. Cosmopilite. And the yeti.

Guards! Guards! is one of my favourite Discworld novels - I usually recommend it as an entry point to the series, rather than the earlier books. Although the first one I ever read was Equal Rites, so I have a soft spot for that too :-)