The Auditors of Reality are unhappy with the Death of the Discworld, who has shown signs of individuality and - shudder - a personality. They decide to fire Death and recruit a replacement. Death accepts this decision stoically, and decides to spend his last few days of existence sampling life, adopting the alias of handyman Bill Door and going to work on a remote farm. 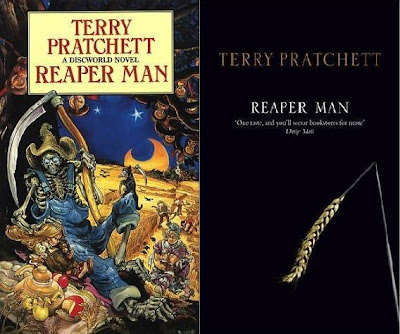 Unfortunately, Death's absence causes some anomalies. Windle Poons, the oldest wizard on the Disc, is upset to discover that, despite dying, he can't move on to the next life. As a result, he has to spend the interim as a zombie but, thankfully, he finds some help from Ankh-Morpork's resident undead rights movement. At the same time, an unusual plague of odd novelty items is afflicting the city. The wizards of Unseen University investigate and discover that something rather unusual is taking shape outside the city walls...

Reaper Man is, in the sometimes complicated hierarchy of Discworld novels, the second book to feature Death in a major role (following on from Mort and running ahead of Soul Music) and the first to feature the Unseen University wizards in a major role (although, confusingly, many of them appeared in a supporting capacity in Moving Pictures and the Librarian has been around since The Light Fantastic). Some of the City Watch (from Guards! Guards!) also crop up. 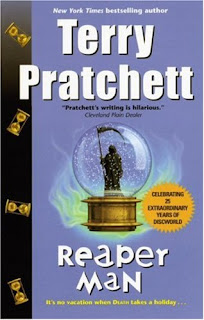 This slightly complicated arrangement probably adds to the schizophrenia of the novel. In all of the Discworld books prior to this, the storylines usually converge at the end and the story is usually quite focused. Reaper Man instead sprawls, with Death/Bill Door's adventures and the subplot of the wizards/Windle Poons not really gelling together. There is a vague link between them, but otherwise the two stories don't really intertwine, resulting in a rather disconnected feeling to the book. This is added to by the wizards stuff being quite funny and the Death stuff being quite serious (the advent of the Death of Rats aside).

"You can't trust those voodoo gods. Never trust a god who grins all the time and wears a top hat, that's my motto."
"Is it? That's a funny motto."
- two of the wizards

Pratchett is also pursuing another satirical target here, following on from films in Moving Pictures and police procedurals in Guards! Guards! Unfortunately, the target is rather weak - Pratchett apparently doesn't like shopping malls, hates muzak and isn't keen on combine harvesters - and there's a distinctly half-hearted feeling to proceedings here. The book never really seems to come together and fire up like the best books in the series, despite many individually good moments and some funny lines. Ultimately this appears to be a case of Pratchett trying to be serious and even moving but also trying to throw some chaotic comedy into the mix as well, and it doesn't work. It's notable that when Pratchett separates the two out - as he does in the double-whammy of the more serious Small Gods and the funny Lords and Ladies - he does very well, but the mix here does not work as effectively.

Reaper Man (***) is readable and interesting, but definitely one of the less successful books in the series. It is available now in the UK and USA.
Posted by Adam Whitehead at 21:38

I think this is being unnecessarily harsh, because although it's a while since I read it I found the two storylines complemented rather than distracted from each other. I also think that pigeon-holing Small Gods and Lords and Ladies as by comparison 'serious' and 'funny' is doing both books a grave disservice - the latter in particular has some deeply affecting themes of maturation and having to sacrifice one's dreams and live in the real world, not to mention some of the scariest sequences to appear in the Discworld series as a whole.

Obviously it was a generalisation, but I think it is legit to say that SMALL GODS is one of the more serious DISCWORLD books despite having some brilliantly funny sequences (most notably the eagle-borne projectile ending) and LORDS AND LADIES is one of the more uproariously laugh-out-loud (the new 'third state' in the Schroedinger's Cat hypothesis is particularly excellent) despite having some of Pratchett's best characterisation and some more thoughtful ideas about life and old age (the Ridcully/Granny stuff was quite interesting).

I can't say I've read much Terry Pratchett material, but I did read REAPER MAN. Sorry to say that I found it awful. Except for one scene that did truly make me laugh out loud (in the middle of work, no less!), I found the humor in it very weak. It's somewhat reassuring to hear an opinion that this isn't his best effort. I might give him another try because of that.

I've been waiting for this review for a while now, and I must say I'm very surprised by it - Reaper Man is one of my favourites. It's true I was young when I read it, and perhaps I should reread, but to me the two stories gelled perfectly - thematically and tonally, even if not interactively.

I don't think it's really fair to say it's just a matter of Pratchett not liking shopping centres or muzak; I think, in fact, that he's making a far broader and more serious point here than he does in almost all his other novels - the 'gimmick' isn't shopping centres, it's depersonalisation and the advent of the hyperreal. The absence of death causes unliving things to be invested with life, including mere conjurations of the imagination, but this does not produce a richer environment - rather, there's a thinning, a dehumanisation, of the lived world. Deathlessness, it says, is soullessness. Death-as-other-half-of-life and death-as-oblivion are contrasted, and thus life-as-other-half-of-death and life-as-absence-of-oblivion are contrasted at the same time: the real and the hyperreal - Death, and the sort of Death that is lit by lightening flashes and turns up at midnight on the dot. Thematically, it's probably closest to Moving Pictures and Witches Abroad, although it's deeper than either of them.

To me, "what can the harvest hope for, if not for the care of the reaper man?" is not only probably the most affective Pratchett gets but also the most serious and philosophical. In fact, the whole passage should be mentioned:

Lords and Ladies, on the other hand, I found totally unfunny, mostly derivative, and generally fluffy. But I'll admit I've only read it once. Perhaps I should go back over the Discworld stories soon.

Anyway, thanks for the review (and the others). Even when I don't agree with you, I appreciate the new perspective you bring.