A Second Chance at Eden by Peter F. Hamilton

In the mid-21st Century a brilliant geneticist named Wing-Tsit Chong creates the affinity gene. When spliced into human beings, it allows them to control bonded servitor animals with total accuracy. Humans fitted with the gene can also communicate with one another using the gene, which creates an effect similar to the old, mythical idea of telepathy. The affinity gene revolutionises science, and when combined with the growing industry of biological technology - bitek - it seems to promise a brighter, less technologically and materially-focused future for the human race. In 2090 the Jovian Sky Power Corporation begins mining helium-3 from the atmosphere of Jupiter and builds a bitek space station, Eden, as a cheap alternative to a traditional but expensive hollowed-out asteroid habitat. Eden is given its own neural strata and its sentient mind can communicate with all of its inhabitants, and all of them with one another, forming the ultimate utopian society. 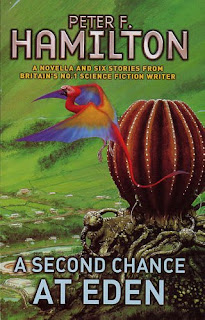 But change is hard for some to accept. The Reunified Christian Church is deeply concerned about the implications of bitek and affinity, for with a person able to call upon the immediate support of thousands of other human minds to any crisis or problem, they grow up better-adjusted and in less need of psychological reassurance. In short, they grow up with no need for faith in what cannot be seen or known. And that is a danger that no religion can ignore.

Spanning 516 years of history, the six short stories and the title novella that make up A Second Chance at Eden chronicle humanity's first faltering steps into space, the colonisation of other worlds and the huge schism along ideological and religious grounds that splits the human race in two, the Adamists and Edenists. The final story takes place thirty years before the events of Hamilton's vast and epic Night's Dawn Trilogy, and tells the story of the last voyage of the starship Lady MacBeth under Captain Marcus Calvert.

Peter F. Hamilton is best-known for his immense, brick-thick novels, themselves usually parts of trilogies or duologies of a truly epic and cosmic scale. However, he initially made his career in short stories, building up an impressive body of work in the six years prior to the publication of his first novel, Mindstar Rising, in 1993. Several of these stories were based around the fictional science of affinity, which he explored in different ways. After his popular story 'Candy Buds' was published he expanded the concept to novel-length, giving rise to the massive Night's Dawn story. In 1998 he revisited these early short stories, re-editing them to fit into the Confederation timeline a bit more neatly, and combined them with some new works to form this collection.

A Second Chance at Eden is excellent, showing Hamilton's skills are just as impressive, if indeed not moreso, when applied to the short form as to his mega-epics. The first story, 'Sonnie's Edge', shows the dark side of affinity as it is used for a rather unpleasant new bitek version of bear-baiting, with an absolute killer ending. The story's setting, Battersea in 2070, (with the vast domes of the London arcology we later see in The Naked God taking shape in the background) is vivid and impressive.

'A Second Chance at Eden' itself takes us to the Eden habitat in 2090. This murder-mystery novella is superb, showing the birth of the culture we will see in action close-up throughout the Night's Dawn Trilogy and examining the morality and ethics of the affinity technology when brought in sharp conflict with religious concerns. This is an intelligent story which, in the tradition of all good SF, brings complex ideas back back down to the human level. 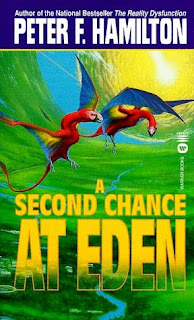 'New Days, Old Times' is Hamilton's answer to why the colonies in the Confederation are ethnically-'streamed', instead of culturally integrated. We visit the planet Nyvan (which plays a big role in the trilogy) and Hamilton's argument - that if different cultures, religions and societies are forced to live together on another world we will simply make the same mistakes all over again - is grimly persuasive. 'Candy Buds' is one of Hamilton's best-known short stories, set on Tropicana, the only Adamist world where bitek remains legal by the late 24th Century, where the richest man on the planet finds himself unusually touched by the plight of a young girl he was planning to exploit for her astonishing discovery. A dark story with a savagely clever ending.

'Deathday' is a superb slice of SF horror, as one of the last colonists ordered to leave the failed farming world of Jubarra pursues a destructive vendetta against a resident lifeform with destructive results. 'The Lives and Loves of Tiarella Rosa' is a curiously brutal and selfish kind of love story with a melancholic aspect, actually reminiscent of GRRM's 1970s SF work (such as 'A Song for Lya'). It's not quite as good as that due to a somewhat weird ending, but it's certainly a change of pace for Hamilton and works well for the most part.

'Escape Route' takes us to the last voyage of the Lady MacBeth under the captaincy of Joshua Calvert's father and explains exactly what happened to trash the ship so badly it was drydocked at Tranquillity for thirty years. This is an excellent SF story featuring some traditional tropes, such as the dubious passengers and an abandoned alien artifact in space, with a clever resolution. For fans of the trilogy, this story does fill in some gaps in the backstory in an entertaining manner.

Overall, A Second Chance at Eden (****½) is an excellent collection of short SF set in one of the most thoroughly-realised SF settings ever created. There are no really weak links and 'Sonnie's Edge', 'Deathday' and 'Escape Route' are all superb, whilst the title novella is nothing short of classic, showing the birth of a new human culture which is beyond normal human experience but in a manner that is convincing and even attractive: a sympathetic Singularity. Hamilton's handling of the religious element is also intelligent and interesting.

The collection is available now in the UK. The American edition has gone out of print but some second sellers on Amazon.com still have stock.
Posted by Adam Whitehead at 20:31

Have books 2 and 3 of the trilogy to finish, now this. All right then, it's off to Amazon/US to find one of those second sellers.

I know Orbit have just reissued the trilogy in the USA (mercifully in three volumes this time round) but not sure about their plans for this and THE CONFEDERATION HANDBOOK. I assume they'll be reissued as well at some point.

I've been meaning to give PFH a go, should I try this first to see if I like him? It certainly sounds interesting.

I'd say so. It's a good sample of the different styles he employs between his different books (the more downbeat and maudlin FALLEN DRAGON versus the intrigue and action of NIGHT'S DAWN against the more hopeful utopian vistas of PANDORA'S STAR and the VOID TRILOGY).

It's also a lot shorter and more approachable than the 1,230-page, shelf-destroying bulk of THE REALITY DYSFUNCTION.

Thanks for the advice, just ordered it for cheap from bookdepository.co.uk (where it is cheaper to order and get free delivery to Australia than it is to walk into a local book store).