KJ Parker's Engineer Trilogy is actually quite a recent series, but Orbit have nevertheless chosen to reissue the books in the UK and Australia with new covers. The new UK editions should be out now, and will hit Australia in March. 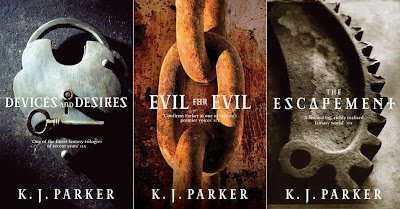 Devices and Desires (2005), Evil for Evil (2006) and The Escapement (2007) have all been very-well-reviewed, although I'm still a way behind on Parker. I enjoyed the Fencer Trilogy back when it was first released, but haven't picked up either the Scavenger or Engineer series. Parker's new novel, The Folding Knife, which is apparently a departure for her, is also published on 4 February in the UK and 22 February in the USA. 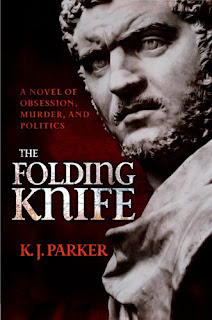 The blurb sounds most intriguing:

Basso the Magnificent. Basso the Great. Basso the Wise. Basso the Murderer. The First Citizen of the Vesani Republic is an extraordinary man. He is ruthless, cunning and, above all, lucky. He brings wealth, power and prestige to his people. But with power comes unwanted attention, and Basso must defend his nation and himself from threats foreign and domestic. In a lifetime of crucial decisions, he's only ever made one mistake. One mistake, though, can be enough.

Very good. I'll have to rectify my lack of Parker reading this year, I think.
Posted by Adam Whitehead at 20:47

That's going straight on the Amazon pre-order list... first I'd heard about it, thank you!

If you liked the Fencers, you'll like the Engineers, btw. The engineering is more to do with trebuchets than creative biophysics.

If you get the chance K J Parker wrote a novella last year called 'Purple & Black,' it takes the form of military dispatches sent between Emperor Nicephorus and his closest friend govenor Phormio who is sent off to the northern frontier to quell unrest. The opening sentence is just brilliant! (I quote) 'You are, of course, an unmitigated b*****d.'

I read the first of these books recently and really enjoyed. I just happened to pick Devices and Desires up in my local library and found that it was an excellent read.

There's some thoughts on the book at my blog - see http://marklord.info/2010/01/04/devices-and-desires-errata-to-my-last-post/