A Warhammer 40,000 movie is currently in pre-production. Dubbed Ultramarines, the movie will be fully rendered in CGI, using the enormous art resources of the 24-year-old miniatures game and fiction line, and will be independently produced for DVD release. The script is being written by Dan Abnett, the most popular author of Warhammer-related fiction (and one of the biggest-selling SF authors in Britain). 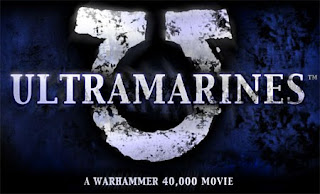 Three major actors have been announced as providing voiceovers for the movie: John Hurt (the first-ever victim of an alien chestburster in Alien), Terence Stamp (Superman II's General Zod) and Sean Pertwee (that guy who dies a lot in movies). In addition, providing solid backup will be Donald Sumpter (recently seen as Kemp in Being Human and soon to be seen as Maester Luwin in HBO's Game of Thrones), Steven Waddington (from The Tudors) and Johnny Harris (The Imaginarium of Doctor Parnassus, Dorian Gray and the forthcoming Black Death, alongside Sean Bean).

The actors discuss their roles here:

The most entertaining moment is John Hurt - a distinguished, multi-award winning actor - revealing his foreknowledge of the WH40K universe gained through his son being an enormous fan, and Donald Sumpter dryly pointing out the rarity of being asked to play eight-foot-tall armour-plated killing machines at his age.

This project, which previously I had been dubious about due to the straight-to-DVD angle and it being filmed outside the Hollywood system, now appears to have some more weight to it. Abnett is a good writer, and there's no way Hollywood would ever touch the WH40K universe with a bargepole without completely destroying all the stuff that makes it interesting (the lack of any clear-cut good and bad guys, most notably). These actors are also of reasonably impressive stature as well. Interesting to see how this turns out.
Posted by Adam Whitehead at 23:26

Sounds brilliant! Really gonna have to get on to the books.

Why oh why can't they make it about someone other than the Captain America's of the 40k universe? I'd love a sci fi movie that replicated the hives or the inquisition. A 40k superhero movie? Far less interesting...

Adam, any idea of the plot or antagonists at this point?

Given Abnett is writing it, I must admit to surprise that they're not using the more relatable Imperial Guard, or even just adapting the GAUNT'S GHOSTS books wholesale to the screen, as the Black Library's biggest-selling series.

No word on the plot or antagonists at the moment. I imagine it will involve the Ultramarines shoot lots of aliens though.

I'm not a huge fan of the Ultramarines myself, but I suppose they have to start somewhere and space marines are their biggest product and their most recognizable property. This may lead to bigger and more interesting (read: Gaunt's Ghosts) movies. Maybe even some live action stuff

Space Marines are the iconic poster boys for 40K, so thats probably why they went for them. In that category Ultramarines are about as bog-standard as it gets which is advantageous to accessibility.

Abnett is effing awesome. Writes good stories (which do strain credibility at times, but thats 40K for you) with engaging characters. His fan interaction is second to none as well.