Solaris Books, under the new management of Rebellion Entertainment, are making a big push for Paul Kearney's work at the end of this year. 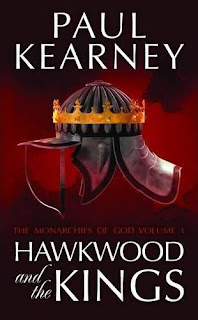 First up, Kearney's classic Monarchies of God series is being reissued in two volumes. Hawkwood and the Kings will be released on 5 August 2010, followed by Century of the Soldier on 2 September.

This series was originally published as five volumes: Hawkwood's Voyage (1995), The Heretic Kings (1996), The Iron Wars (1999), The Second Empire (2000) and Ships from the West (2002). The storyline sees the Merduks of the east invading the continent of Normannia, where the Ramusian faith holds dominance over the kingdoms known as the Monarchies of God. As the eastern-most kingdom of Torunna fights for its life, the Ramusian church seems more interested in burning heretics than in helping to battle the heathen invaders. In the far western kingdom of Hebrion the young king bristles under the rising power of the church, whilst a sailor named Richard Hawkwood is convinced to embark on a dangerous ocean voyage beyond the setting sun. 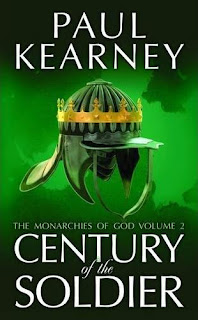 The result is a rich and satisfying epic fantasy series, notable for its extreme ruthlessness towards its characters (at times Kearney makes GRRM read like David Eddings), its relative conciseness (the five books combined only just scrape past 1100 pages) and its Renaissance-influenced setting. It's an excellent series, and it's great to see it reaching a new audience this year. 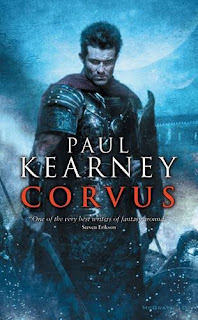 In terms of new material, Kearney's latest novel Corvus will also be published on 28 October 2010. A self-contained follow-up to The Ten Thousand, the new book sees the soldiers of the Macht unified by a charasmatic new leader, Corvus, who seeks out the famous warleader Rictus to aid him in his mission, but Rictus wants nothing more than to retire peacefully.

Update: Paul has confirmed the split between the two books. Hawkwood's Voyage and The Heretic Kings make up the appropriately-titled Hawkwood and the Kings, whilst The Iron Wars, The Second Empire and a somewhat rewritten Ships From the West comprise Century of the Soldier. The books will also feature new maps as well as new cover art.
Posted by Adam Whitehead at 13:33

Added to the "to buy" list, you've not let me down so far Adam *narrows eyes* so far...

Paul recently posted on my blog that the release date for Corvus is November 2010, not October.

But whatever. Looking forward to it very much.

Adam-
Is there any news on the idea that Kearney was adding pages to the omnibus editions? I recall about 2 years ago when he was discussing the omnibus release that he was going to add in quite a bit that had been edited out of the originals (an "author's preferred edition" if you will), but I have'nt heard anything about that since.
thanks

This is great news for Kearney fans! Hopefully this book (and the re-release of Monarchies of God) are well received. If they are, we may finally be able to hope for a conclusion to the Sea Beggars series!

I wonder if he will get to finish the Sea Beggars.

Paul's position on the SEA-BEGGARS is that it would already be sorted out except that Bantam UK were and still are holding onto the rights for all they were worth, so he has to wait for the rights to expire before he can publish the series through Solaris.

When the rights do expire, the first two volumes (THE MARK OF RAN and THIS FORSAKEN EARTH) will be combined with the third and final volume, STORM OF THE DEAD, to form a large omnibus edition. How long we have to wait for that is unclear and down to contractual arrangements.

Amazon are currently listing Corvus for release on 28 October 2010. Publisher-speak sometimes lists titles released right at the end of one month as being released in the next or, possibly more likely, Amazon has got the wrong date ;-)