Where to Start? - Peter F. Hamilton

Thanks to the power of the Internet, more and more readers are receiving recommendations about authors they should check out. However, given the prolific nature of some authors and their dabbling in multiple series (complete with multiple starting points, thanks to prequels, first-published novels and so on), finding a good starting point can be tricky.

A case in point is Peter F. Hamilton, who has written multiple novels, some set in different universes, with his individual settings and universes having multiple entry points. So where is the best place to start with his work? 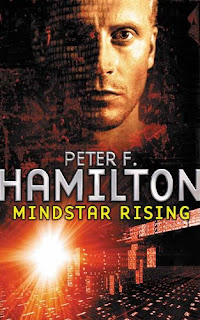 In Hamilton's Greg Mandel Trilogy, mid-21st Century Britain has been ravaged by global warming, an extremist Communist government, a bloody civil war, and, most traumatic of all, the capital of the nation being moved to Peterborough (easily the single most far-fetched concept in the entirety of Hamilton's fiction). In the aftermath of these catastrophes, semi-psychic soldier of fortune Greg Mandel investigates various crimes and corporate politics. It's all rousing stuff.

Fortunately, Hamilton has only ever written three books set in this universe: Mindstar Rising (1993), A Quantum Murder (1994) and The Nanoflower (1995). So if you want to check this series out, start with Mindstar Rising. Simple. 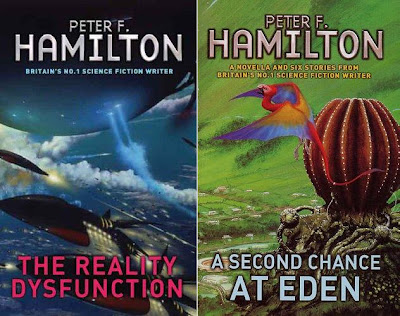 In Hamilton's Night's Dawn setting, humanity has expanded into space and, by the early 27th Century, has colonised some 860 planets and split into two divergent strains, the technology-enhanced Adamists and the genetically-engineered Edenists, and met several alien races. This is big-canvas, epic space opera of the highest order.

There are two viable starting points for this setting. There is the Night's Dawn Trilogy, of which the first book is The Reality Dysfunction (1996), Hamilton's single finest novel. There is also a short story collection spanning 500-odd years leading up to the first novel, entitled A Second Chance at Eden (1998). The collection is shorter and features a greater variety of stories and prose styles, and may make for a more digestible taster of Hamilton's writing skills before embarking on the 3,600 pages of the trilogy. 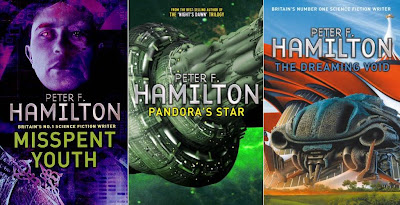 Hamilton's Commonwealth setting follows a different path to Night's Dawn. Whilst still serving as epic space opera, the series features more advanced technology based around wormholes. Wormhole portals link the worlds of the Intersolar Commonwealth together, so people literally take a train ride from one planet to another. There are few spaceships (to start off with) and the setting is slightly more exotic, with humans living for centuries thanks to rejuvenation technology.

There are three entry points to this sequence. Misspent Youth (2002) is, chronologically, the earliest volume in the sequence, set in the 2040s in Britain where the rejuvenation technology has just been invented. Whilst viable, the book is probably Hamilton's weakest single novel and features little in common with the larger events of the later books. There are a couple of Easter egg mentions in the later novels to characters and events in Misspent Youth, but overall I'd put it off until later.

Pandora's Star (2004) is the first book in the Commonwealth Saga duology, set 340 years after Misspent Youth, and makes for the best entry point to this setting. Its direct sequel is Judas Unchained (2005), which is less the second book in the series and more the other half of Pandora's Star.

The Dreaming Void (2007) picks up on events in the Commonwealth setting 1,200 years later, and is the first in the Void Trilogy, followed by The Temporal Void (2008) and The Evolutionary Void (2010). Hamilton is also planning a further trilogy set in this universe. Whilst Hamilton goes to some lengths to make The Dreaming Void stand alone, it does spoil the end of The Commonwealth Saga and reveals which characters from the earlier series survive. At least three major characters from Commonwealth also appear in the Void sequence. For these reasons, whilst it is not impossible to enjoy the Void books on their own, I would heavily recommend starting with Pandora's Star first. 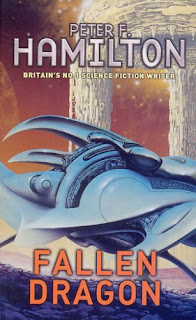 These are pretty straightforward. Fallen Dragon (2001) and Great North Road (2012, planned) are self-contained novels set in their own universes with no relation to anything else Hamilton has written. For these reasons, they can be read at any point with no problem.

Hope that helps!
Posted by Adam Whitehead at 15:38

Email ThisBlogThis!Share to TwitterShare to FacebookShare to Pinterest
Labels: peter f. hamilton, where to start

It does, thanks. Is Hamilton your favorite Sci-fi writer?

Possibly, although his VOID TRILOGY has not really been that exciting, especially compared to the stuff Alastair Reynolds has been writing recently, so Reynolds might supplant him depending on how THE EVOLUTIONARY VOID and the 11K TRILOGY turn out.

Thanks, by sheer luck I managed to start off with Fallen Dragon so I'm looking forward to sinking my teeth into something a bit bigger!

I always recommend people to start with the Pandora's Star and Judas Unchained duo. His writing is a lot better in that than in the Nights Dawn trilogy.

There's also Watching Trees Grow, a novella with a story set over a few centuries and pretty decent, although rather short for him. Definitely worth picking up!

At your advice previously I started with A Second Chance At Eden to get a feel for his style and themes and I totally loved it so I plan of reading all of his stuff when I can get to it.

I second starting at Second this very second. (a ha!)

I guess this answers my comment from the 28th of February. Thank you very much. :D I can stop feeling ignored now.;)Seriously though, cheers.

Thanks for the great post! Hamilton's a writer I want to check out in the next six months or so. I'll have an idea where to start now!

The 11K triology, is that a forthcoming work by Reynolds?

Yes, the 11K Trilogy is Reynolds' next project. Book 1 is due in a year's time, I believe. The title comes from the idea that the books start in the near future and span the next 11,000 years of history (involving relativity to keep some of the same characters going). Reynolds has said it will be unusually optimistic (for him).

Nice overview for a very enjoyable author. The only book I haven't read so far is Misspent Youth.

Are you sure Peterborough is the capital in the Mandel books? I think it is only the economic engine, which is justified in the books, while the government is still in London.

I'm kind of new to sci-fi reading, but I've always really enjoyed movies and love Ray Bradbury books. I've read some Terry Pratchett, but I'm unfamiliar with Hamilton - I'll have to check him out!

I'm writing because my colleague Meaghan reached out to you last week regarding Bambera and what we do for our clients in the blogosphere.

We think you'd be a great fit for our network - here's a quick rundown:

Bambera.com is a social network marketing company that connects bloggers with relevant sponsored content that matters to their audiences.

In a nutshell:
1) Our clients tell us what types of audiences they would like to reach with their sponsored message.

2) We ask promoters to share the content they feel is appealing to their readers/friends/followers. (So if you have a blog about men's health, you don’t have to promote a client’s sponsored infographic about the history of lipstick.)

4) You submit screenshots (we’ll show you how to do that, it’s pretty easy) to verify you promoted the content.

Once you sign up, you'll receive content to pass along to your audiences. You have to right to decline any or all content you do not wish to publish on your blog or through your social media channels.

There’s no commitment and there is no cost to be a part of the Bambera network.

Please feel free to get in touch with me anytime via email. I look forward to talking to you about Bambera and working with you in our network! Thanks so much for reading :)

@ jtmeijer: As far as I recall, Peterborough is the full capital and the seat of the government, as Downing Street and the surrounding area in central London was destroyed by the bomb that wiped out the ultra-socialist government and most of the rest flooded as sea levels rose.

Living in Peterborough as I do, I love Hamilton's 'Greg Mandel' books, even if my suburb becomes a slum area!

For the Night's Dawn Trilogy you give us the starting point - The Reality Dysfunction - but you don't say what the next two books are.

The Neutronium Alchemist and The Naked God.

If you intend reading all of his works, then the above suggestions are perfectly valid.

But if you're taking up a "recommended to read", then like me, you might find his short story collections to be good samplers, letting you see what you're in for, without heavy investment in time and money.

Personally, I started with "Manhattan in Reverse". In particular, The Demon Trap story within that proved to be a perfect example of his creativity, and breadth and depth of realistic science. That one story alone has driven me to acquire and read the remainder of his works.