A Shadow in Summer by Daniel Abraham

Centuries ago the Old Empire fell to an internecine civil war, destroyed by the sorcerers known as poets, wielding the powers of ideas given human form and volition, the andat. Whilst the empire was destroyed, the colony-states across the ocean survived and became the cities of the Khaiem, where the power of the andat continues to hold sway and hold rival nations, such as expansionist Galt, in check. The Khaiem are subtle (relying on a complex courtly language of poses) but also ruthless in trade and in the defence of their riches. 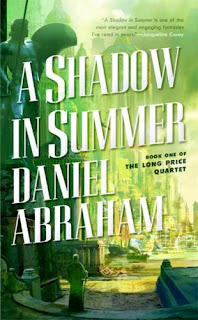 Otah Machi was once a student of the poets, but when given the choice to study for entrance to the order he refused and went on the run, refusing to return to his noble home for fear of what chaos it would wreck in the order of succession. Instead, his path takes him south to the city of Saraykeht, a city whose riches are based on the cotton trade, strengthened as it is by the activities of the poet Heshai and his andat, Seedless. Meanwhile, another student of the poets also arrives in Saraykeht on an important mission. Both men become embroiled in a chilling conspiracy designed to destroy the power of the andat once and for all.

A Shadow in Summer is the first novel in The Long Price Quartet, Daniel Abraham's epic fantasy in which war, love, treachery, intrigue and hubris is studied and examined in-depth. Abraham's series is a noted departure in the subgenre in that his focus is more on the motivations of his protagonists rather that the trappings of the setting. The 'magic system', if the relationship between the poets and the andat can be described as such, is vivid and interestingly depicted, but it's more of a means to an end than an end in itself. In this, Abraham is reminiscent of Guy Gavriel Kay, whilst he also shows the influence of his one-time teacher George R.R. Martin in his multi-faceted characters. But the melancholic and slightly defeated tone of the many of the characters is something more unique to Abraham's writing, in particular his humane treatment of his villains, who are shown to have their reasons (feeble or otherwise) for what they are trying to do. 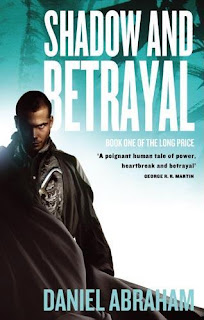 It's something of a quiet book, particularly for the opening volume of a four-volume epic fantasy series, focusing on emotions and motivations, and some may find it too slow-moving (despite its relatively concise 300-page length). But this is more the opening movement of a grand opera, hinting at and laying the groundwork for the greater and grander themes to come.

A Shadow in Summer (****) is a rich and convincing work of fantasy that strikes a different pose (pun intended) to many of its contemporaries, and is all the better for it. It is available now in the USA and, as part of the Shadow and Betrayal omnibus edition, in the UK.

I previously reviewed the book in its omnibus format here.
Posted by Adam Whitehead at 17:11

Email ThisBlogThis!Share to TwitterShare to FacebookShare to Pinterest
Labels: a shadow in summer, daniel abraham, the long price quartet, the long price: shadow and betrayal

Ah... such a great series. I recently found out the Dutch publisher stopped the translations after the second book. Another reason to stick to reading in English.

I thought that this was fantastic.

I also love how he handles the 'villains'. In each book of the series it's quite easy to see the villains' point of view.

This series ranks as second behind Martin for me. Great review as always, though to me it's a 4.5-5 star book.

Hmmm you kinda give away the identity of one of the characters there that isn't revealed straight away (or maybe I was just too dumb to see it... actually that makes more sense).

Will be very interested in your reviews of the final two, I thought the series and characters just got better and better and more "grey" as it went along, something I loved, and had a very emotional finality to the last book.

I thought this was a decent series from the beginning, and it improves with each successive volume.

This is the first time I've seen the cover of the omnibus (all our copies are the US versions with the Martiniere artwork), and suddenly I know where Abraham's default LiveJournal icon comes from.

Just reading my way through the second volume and the pace is still a bit slow for me.
However, I am so far enjoying the series, especially the way the Andat are described/handled in the first volume.
I remember having read somewhere how the Andat are malevolent demi-god like beings etc. and can't really understand where the malevolent part came from. :) Can't wait to find out more about them.

Does anyone else get the feeling that these new fantasists like to write about "love" a bit too much?

I just set a rule for myself that I must finish all the fantasy series I'm in the middle of before I start a new one. I have the first two in this series on my shelf, but I MUST hold off... or maybe I'll give up on that rule.

This was probably my favorite book in the series (and I always, always offer it as a recommendation).

What's interesting about it is that many of the typical elements in fantasy are absent - there are no great wars, warriors, battles, and the like.

It's obviously a great work, and I liked many things about it, but I thought esepcially the waterfront scenes in bars and brothels where fairly dark fantasy standard. These scenes could have payed in almost any slightly gritty fantasy setting, and that's also where I think it gets a bit slowepaced and stuffy. I'm looking forward to the changes of season though.