Having been displaced in time to the late 1970s, several of the survivors of Oceanic Flight 815 and assorted allies have managed to return to the present by detonating a nuclear device on the mysterious Island. Jack Shepherd's original hope was to change history and prevent Flight 815 from ever crashing on the Island in the first place, but this does not seem to have worked. Shepherd and his friends are soon re-apprehended by the Others and taken to their new home, the Temple, whilst on the other side of the Island the person who has taken the identity of John Locke is making his own plans... 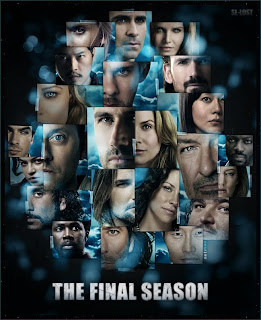 Lost's final season opens in a brain-scrambling note. The attempt to use a nuclear device to change history at the end of the fifth season appears to have failed, although it has (somehow; this plot point is papered over a bit) also returned our heroes to the present, where the Others are preparing for a showdown with the so-called 'Man in Black' who has taken the form of the late John Locke. Simultaneously, we get 'flash-sideways' to another reality where the plan apparently worked and Flight 815 did make it to LAX. In lieu of the flashbacks of the first three seasons, the flash-forwards of the fourth and the time shifts of the fifth, we now get scenes from this second timeline interspersed with the existing one.

To some degree, your enjoyment of Lost's final season will depend on how you view the sideways storylines. On the one hand, it is vaguely amusing to see what would have happened if our heroes had never crashed on the Island, but since the point of divergence in the timeline seems to have been in 1977 there are a lot of changes to this timeline as well. Jack has a son, Kate killed a different person, Hurley never had really bad luck, Boone was unable to get Shannon to leave Australia and so on. These changes make it hard to get emotionally involved in the sideways, since they seem to have no direct impact on the 'primary' storyline of what is happening back on the Island.

This is problematic as the 'primary' storyline now seems to be moving into the endgame. The two factions (a now-ghostly Jacob and his so-far nameless enemy) are gathering their forces, some long-standing mystery elements are being explained (we now know what the Monster is, even if we are unsure how it entirely came to be) and some old story elements from prior seasons have been revisited (such as the 'Adam and Eve' skeletons in the caves, as well as the Numbers). To cut away from such elements to find out that in the parallel universe Kate is still a screw-up is frustrating, to say the least, although this does vary by character. Sayid's descent into darkness in the primary storyline whilst we see him in a (somewhat) better light in the flash-sideways is well-played, for example, whilst Jack's sideways episode (surprisingly, for a Jack-centric episode) does not suck. The producers promise that the relevance of the sideways flashes will become clear soon enough, at which point they may bear revisiting.

Elsewhere, the acting remains strong and there is a welcome addition to the cast in the form of Japanese actor Hiroyuki Sanada (notable for almost decapitating Tom Cruise during the filming of The Last Samurai), who plays the enigmatic leader of the Temple guardians, Dogen, although in fine Lost fashion we find out little about him before his apparent exit from the show (this being Lost, I doubt we've seen the last of him). Terry O'Quinn also works gangbusters as he simultaneously portrays Locke (in the sideways flashes) and the unknown adversary who has taken on his form, whilst Jorge Garcia as Hurley continues to provide effective level-headed leadership when required (taking over from Jack as an effective leader figure in one episode, surprisingly) and excellent fourth-wall-breaking observations elsewhere (at on point directly voicing a fan-favourite theory for the origins of the skeletons in the caves). Naveen Andrews also continues to deliver reliable performances, even if his descent to the dark side is a little obvious.

With the exception of the requisite weak Kate-centric episode, the sixth season of Lost has so far effectively mixed effective mystery resolutions with an interesting ongoing storyline on the Island, although the relevance of the flash-sideways storylines remain somewhat obtuse (they may improve once we know their full role). With ten episodes left, it will be interesting to see how well Lost is able to deliver those long-promised answers, but so far things seem promising.

I've been pleased with Season 6 so far, for the most part. It's exciting to think that the writers will be wrapping everything up soon, and hopefully it'll all make a bit more sense.

I'm liking the new season, the way it seems that one reality is "bleeding" into another. Still think there waiting until the last episode to fully reveal why the polar bears really need to be there :P

They've explained the polar bears like 15 times now. I think they've said they're not going to explain it again ;-)

huh, i only remembered them saying they were for research when jack was being held by others. For a mystery introduced in the first episode or two, I was hopeing for somehting a tad more epic. Polar bears as black shirted mans minions or something.
Though that would probably ruin the series tbh...
i may be crazy, but tell me a charge of the rohirrim outside the walls of minas tirith with polar bears would not be awesome :D :P

I don't remember when anything was said about Kate killing someone else, when was that?

I think it was mentioned briefly and off-handedly in the episode, but it was much more prevalent in the Comic-Con video from last year that in the Sideways universe, when Kate blew up her house to kill her evil father (or was it stepfather? I forget), she didn't hurt him but did kill an innocent passer-by.

Yeah I didn't notice the killing someone else by accident either. I'm still as confused as ever but I've found a lot more LOL moments in these last few episodes, Hurley's observations especially.

What has always pissed me off about this show is just how complacent the characters seem to be. I'd assume people would be a lot more angry and WTF all the time than just go along with whatever which seems to be the norm.

It better end well or there will be HELL to pay.

As far as I remember in the sideways world Claire asked Kate what she was on the run for and kate told her that a serviceman (Gas, Electric, not quite sure) had been killed in an explosion and she was blamed for it.