Unexpectedly, news has broken that one of the key roles in Game of Thrones has been recast. Jennifer Ehle had been tapped to play the role of Catelyn Stark, the wife of Lord Eddard Stark and a major protagonist in the series, and played the role in the pilot episode. Following the series being picked up for a ten-episode full season, it has now been confirmed that Irish actress Michelle Fairley will be replacing her. 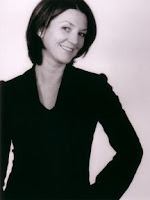 Michelle Fairley
The news was somewhat unexpected. Ehle, the star of the mid-1990s (and possibly definitive) BBC mini-series version of Pride and Prejudice and a very respected stage actress, was one of the higher-profile castings for the pilot and her casting was considered a coup, along with that of Sean Bean and Peter Dinklage. No official reason has been given for Ehle's withdrawal from the project, but it is apparently more of an issue about clashing schedules rather than any concerns with her performance.

46-year-old Michelle Fairley is much more a veteran of episodic, ongoing television than Ehle, and recently gained positive notices and reviews for her portrayal of footballer George Best's alcoholic mother in a recent and acclaimed BBC TV movie. She is currently filming the role of Hermione's mother for the final two Harry Potter movies. Westeros.org has some more information on her here.

Obviously, disappointing news. I thought Jennifer Ehle was an excellent match for the role of Catelyn. On the other hand, Michelle Fairley handled some very challenging material in Best: His Mother's Son and looks like she could be a good fit for the role.

It is unclear how big an impact on production this recasting will have. Ehle had already filmed her scenes in the first episode, including the big feast scene and the arrival of King Robert and his entourage at Winterfell. Reshooting these scenes could involve major expense. It'll be interesting to see how HBO handle this situation.
Posted by Adam Whitehead at 18:51

Sorry, I don't looks anything like Cat. I'm sure she's a fine actress. Though having none of the established pedigree. This seems bad news any way you look at it.

I saw her in her off Broadway show tonight. It was quite funny. I hung around to see if I could ask her why she dropped the series, but no luck.

It could also just be that she is in the show till April...

Michelle Fairley is one of my favourite actress and she looks too pretty and natural. I think she is the best one to act as the mom of Hermaine Granger in harry potter, because she moreorless resembles Emma Watson in some way.
Thanks for the entertaining news.
It was a nice to read article.

It'll be interesting to see how HBO handle this situation.

A wizard did it.

Ah that is bad news indeed, I think Jennifer Ehle would have made a wonderful Catelyn. She is such a great actress and really has the right look for it too.

i think michelle fairley will be fantastic in the role. she is a fantastic actress and will be brilliant. about time this actress got more air time!

This photo has been mistaken to portray Fairley, yet it is not true. She looks different. I guess we are going to watch the next HP with interest :)

Adam, you need to update the photo. That's not Michelle Fairley! That's Ali Something-Or-Other who wrote a screenplay that Fairley worked on.

(Someone on WinterIsComing figured this out).

Good catch. Although in fairness a lot of the POTTER websites made the same mistake as well.

Why HBO why? Sorry, call me shallow if you want but she is so homely and plain looking. What were they thinking?

Where is the SEX APPEAL? There's so much sex and drama in Song of Ice and Fire, can you take a note from your hit series True Blood, HBO?

Do people who work on these things actually read the books?

Hopefully HBO will find its balls, commit, and make this great.

What now, Jerks!I couldn't have pictured Catelyn as anyone else!