Two years ago, the Great Spring Sickness swept through the Seven Kingdoms, killing tens of thousands and leaving the realm battered and fragile. Beyond the narrow sea, the defeated but not destroyed Blackfyre Pretenders remain a significant threat, whilst the Stark in Winterfell has called his banners to deal with another enemy. As the realm seethes in discontent, the quiet, bookish King Aerys I Targaryen sits the Iron Throne but leaves the realm to be ruled decisively by his Hand, Lord Brynden Rivers, 'Bloodraven', a kinslayer who is said to be accursed in the sight of the gods and men. 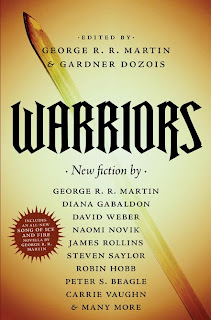 However, such concerns seem far away for Ser Duncan the Tall, a hedge knight, and his squire Egg, when they stop at the castle of Whitewalls where Lord Butterwell is celebrating his marriage. Hedge knights and lords alike gather to wish the couple well and partake in the celebratory tourney, but beneath the surface Dunk discovers intrigue and conspiracies, feuds dating back decades and plans that will reverberate for years to come. For at this tourney, there is more than one mystery knight...

The 'Tales of Dunk and Egg' are a series of novellas that take place in the wider world of George R.R. Martin's A Song of Ice and Fire, decades before the events of the first novel in the series, A Game of Thrones. At this time the Targaryens are still secure (but not unopposed) on the Iron Throne and barely any of the characters from the main series have even been born. The most important event in Westeros' recent history is the Blackfyre Rebellion, when the eldest bastard son of King Aegon IV attempted to supplant his trueborn brother and seize the Iron Throne. He was defeated but he left behind brothers and sons to carry on the struggle. Readers of the novels will know that the 'Blackfyre Pretenders' remain a major problem for some considerable time, and from the prevalence of this backstory element in The Sworn Sword and now The Mystery Knight I'm going to hazard a guess their future exploits will also be chronicled in future instalments of the series (a fourth novella has been pencilled in for after A Dance with Dragons, and Martin projects as many as nine of the stories in total).

The Mystery Knight has been in gestation for a long period of time, with Martin completing most of the tale during the complex writing of A Feast for Crows before finally completing it for publication in the Warriors anthology (full review forthcoming). Surprisingly, for a story so long in the writing it's a pretty fast-paced tale, taking place over just a couple of days and focused on just a few core characters. At the same time there's some fairly complicated politicking going on, not to mention some excellent Easter eggs for fans of the main series (the excessively cautious nature of one character from the books is explained here by events that happened to his ancestor, for example) and several memorable characters that have to be drawn in a (relatively) constrained page-count.

Martin pulls this off surprisingly well. Of the three 'Dunk and Egg' tales published so far, The Mystery Knight comfortably slips into the middle in terms of quality. It lacks the elegant simplicity of The Hedge Knight but isn't as slight as The Sworn Sword. It also builds on the expositionary overload of The Sworn Sword, where the backstory about the Blackfyre Rebellion was fascinating but overdone compared to what was actually needed for the plot, whilst here it is actually essential to the story. There's more action, more intrigue and more carefully-nuanced characterisation than The Sworn Sword, but the story lacks the satisfying conclusion of The Hedge Knight, with an unusually neat ending by Martin's standards (although the final line is superb) that lacks the messy consequences he usually favours. There's also a slight leaning on prophetic dreams and visions (as indeed there also was in A Feast for Crows) that feels slightly over-convenient, considering the series' (relative) gritty realism in other areas.

The Mystery Knight (****) is a short but satisfying tale of the Seven Kingdoms that features many of Martin's hallmarks of solid writing, great characters, intrigue and action, but lacks the punch of The Hedge Knight and epic scope of the novels proper (although hinting intriguingly at a bigger picture beyond the confines of the story). The story will appear in Warriors, published by Tor Books next week. A UK publication deal has not yet been reached. A comic book version of the story is likely to appear, but not for two years (the period of the exclusivity contract on the stories in the collection).
Posted by Adam Whitehead at 21:28

Email ThisBlogThis!Share to TwitterShare to FacebookShare to Pinterest
Labels: a song of ice and fire, george r.r. martin, the mystery knight, warriors

A book collecting those novellas like Erikson's Bauchelain ones would be nice. Do you know if anything like that is planned?

Though I'll get the Warriors anthology anyway because it looks like there's more than one good story in it. :)

^I remember Martin himself saying (read it just recently somewhere but can't remember where) that these Dunk & Egg short stories will be collected later into one volume or possibly into several books if/when he has time to write 'em more.