The Boy in the Striped Pyjamas by John Boyne

Bruno is a nine-year-old boy living in Berlin who is happy going to school and playing with his friends. When his father gets a new job, their family has to move to a place called 'Out-With', a cold and desolate place in the country, where Bruno and his sister Gretel have to be tutored at home. Ignoring warnings to remain close to the house, Bruno explores the edges of the huge wired-off camp next to their house and meets a boy named Shmuel who lives on the other side of the fence, with whom he becomes friends. 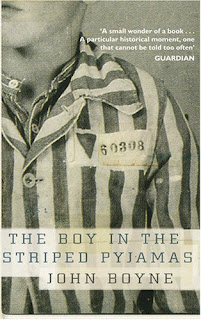 The Boy in the Striped Pyjamas is an un-researched, wholly unbelievable and rather insulting novel. John Boyne writes his book in an extremely earnest tone, using the horrors and misery of the Holocaust to...I'm not sure what actually. The book is extremely short (210 pages of extremely large type and unusually narrow margins) and appears to be completely bereft of any kind of point. Bruno moves next to Auschwitz (but doesn't know what it is), moans about leaving his friends behind, meets a Jewish boy and they swap some illuminating stories (except they aren't) and there's a few knowing moments when adult readers can work out some nasty things are going on off-page and then it ends on a note so contrived and unbelievable it is borderline comedic. 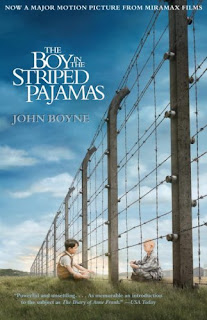 The book is based around a series of lies. A nine-year-old boy growing up in Berlin in 1943 would be close to the age for entering the Hitler Youth (by this stage compulsory) and would have been educated at school about the 'evils' of Judaism. The notion that a nine-year-old boy in Nazi Germany wouldn't know what a Jew was or that there was even a war on is completely farcical. His twelve-year-old sister definitely would, as she would be a member of the League of German Girls (the female equivalent of the Hitler Youth) and by this point would be pretty heavily indoctrinated in National Socialism. The idea that the daughter of a senior military official and someone personally earmarked for greatness by Hitler himself (who has dinner at the family house at one point in the book) would evade this compulsory service is also inconceivable. The notion that a prisoner of Auschwitz would be able to spend hours on end, day after day, talking to someone through a fence without a single guard or other prisoner noticing is also fundamentally unbelievable.

The Boy in the Striped Pyjamas (*) is a book that the author conceived of and wrote apparently in a deliberate effort to be worthy and artistic, but then did no research for the book (apparently written over a single weekend; it shows, badly) at all, making elementary errors that even the most casual student of WWII, Nazi and Jewish history will pick up on immediately. This is that most pitiful of books, a contrived narrative that makes an attempt to deliberately tug at the heartstrings by employing a real-life horror to make up for the writer's lack of ability. Definitely one to be avoided.
Posted by Adam Whitehead at 13:31

Email ThisBlogThis!Share to TwitterShare to FacebookShare to Pinterest
Labels: john boyne, the boy in the striped pyjamas

Wow. This one really rubbed you up the wrong way, I see. And to think I've got in stashed somewhere in my library.

If half of what you're saying is on the money, consider it burned. Or perhaps just donated to charity. Bleh.

You are absolutely correct in your assessment of this book, Adam.

It's really a shame that this is Boyne's best-known work. I've read most of his other novels and found them to be so much better. If you want to give him another try, I'd suggest Crippen or The Thief of Time

i think john has done a great job. Regardless of the loop hole that you have found. Do you think it is still 200 pages that is worth reading?

I personally admire the ability that john has that it to write a story as plain and simple took and effect on the reader.

Do you think shumel actually intentionally invited bruno to come over to the other side of the fence ?

You might be interested in my review of the book. I think my reaction was even more negative than yours: