In the aftermath of the 2009 Song of Ice and Fire calendar debacle (the result of mismanagement by the redoubtable Dabel Bros), George R.R. Martin's main publishers, Bantam, have taken over production of future calendars. 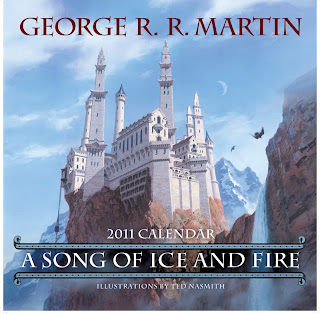 The 2011 calendar had previously been earmarked for the work of well-respected genre artist John Picacio, but as he explains Bantam brought forward the deadlines because they wanted the calendars on sale at the San Diego Comic-Con to capitalise on growing interest in the HBO TV series. As a result, Picacio would not be able to meet the reduced deadlines and it was decided to drop his work back to the 2012 edition.

Luckily, Bantam has a lot of artwork already completed and in for The World of Ice and Fire book due after Dance with Dragon's publication. After some consideration they chose to use the thirteen castle paintings by noted Tolkien artist Ted Nasmith to make up the new calendar instead.

The castle on the front cover is, of course, the Eyrie, the seat of House Arryn, overlords of the Vale. The Eyrie was built in the Age of Heroes by the Andals and sits on a shoulder of the Giant's Lance, one of the tallest mountains in Westeros. The Eyrie features prominently in the first and fourth books of the series, and I'm intrigued to see how HBO handle the castle in the TV series. 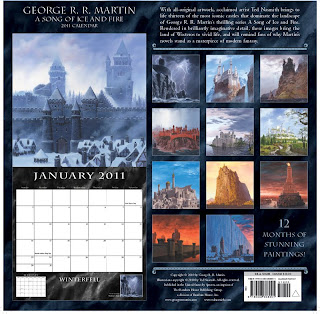 The other castles are shown on the back of the calendar. The large image is of course Winterfell, the seat of House Stark, built by Brandon the Builder more than eight millennia before the events of A Game of Thrones begin (well, so tradition holds; the maesters are more dubious about these massive spans of time). From top-left onwards, the other castles are: 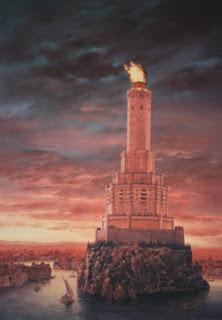 The 800-foot-tall, seven-sided High Tower of Oldtown.
A thirteenth castle portrait will appear in the book as a double-page spread. Based on Nasmith's paintings, this will be either of Pyke, the seat of House Greyjoy of the Iron Islands, or the Twins, the seat of House Frey of the Crossing.

Great stuff. The calendar will be available in the US from July and in the UK on import from the same time. No word of a specific UK reprint yet.
Posted by Adam Whitehead at 16:36

Email ThisBlogThis!Share to TwitterShare to FacebookShare to Pinterest
Labels: a song of ice and fire, george r.r. martin, ted nasmith

Even if one doesn't follow the series, it looks like this would be great for the artwork alone.

I like that they've decided to go with a specific theme, too.

So very, very pretty.
I like the added touch of someone falling out of the moon door in the Eyrie picture as well.