Bantam confirms that ADWD will NOT be split

With the release date of A Dance with Dragons' drawing closer and the novel growing larger, there has been speculation in some quarters that the novel would have to be split in half for hardcover publication. HarperCollins Voyager have already said that the UK paperback will be two volumes and Bantam hasn't ruled out a two-volume US paperback, but the status of the hardcover was less certain. 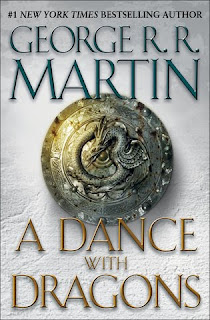 After all, back in 2005 when A Feast for Crows was split, Martin said that the 1,600 manuscript page mark was a line in the sand that couldn't be crossed, and once it was other plans had to be made. Dragons passed the 1,600 manuscript page mark several weeks ago, leading to fears of a split. Of course, the context is somewhat different: Martin is a much bigger-selling author now (A Song of Ice and Fire has more than doubled its total number of copies sold since 2005) and at the time of Crows's split he still had hundreds more pages to write, whilst with Dragons not much more work remains to be done.

Still, the question was being asked enough for Shawn Speakman of Suvudu and the Terry Brooks website to ask Martin's US editor what the score was. Her reply was pretty clear:

"Hey Anne, has there been any talk of having to split DANCE? Seems like it is getting quite large...? -- S."

So that's one possibility laid to rest. A Dance with Dragons will be published in one volume on 12 July. Although I'm sure everyone will be happier once GRRM confirms that the final manuscript has been fully completed and delivered.
Posted by Adam Whitehead at 18:48

Size = Quality? I really like the series and the TV series as well, but "Feast for Crows" was rather weak.

So there is a lot of text in the book. I hope this translates into a lot of good progress. *Positive thinking*

I will be waiting for the paperbacks, as I have all the other books in paperbacks and nothing screws up a book shelf than just one hardback in the series. The bummer here is that I have to wait and now have to send the same amount as the hardback. Still I'm really looking forward to this book.