If last week's story was about Game of Thrones smashing UK expectations and doing moderately well in the USA, this week was about maintaining that healthy performance and not losing ground. 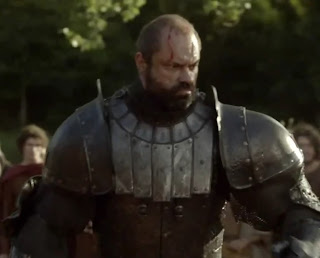 Gregor Clegane urges viewers to watch his debut episode.
Studying TV ratings is an interesting game, something I first experienced back when anxiously biting nails over whether Babylon 5 was going to be renewed each year and watching Doctor Who's ratings plummet as the BBC did its level best to kill the series with insane scheduling decisions (which they successfully did in 1989). A familiar pattern is to see a new series, especially one as heavily-trailed as Thrones, start off strong, then drop over the next few weeks and then either level out (renewal, but possibly only as a mid-season replacement with fewer episodes), shoot up again (full renewal) or keep dropping (cancellation). However, Thrones doesn't seem to be doing that.

First off, an extra few days' analysis revealed the full, adjusted-for-DVR-and-online figures that Thrones hit for its first episode: 6.8 million watched in the the USA in the first week, compared to 7.1 million for Boardwalk Empire, the most successful premiere in HBO's history. Impressive. Most impressive. Of course, HBO did completely nuke their channels with showings, trailers, more showings and behind-the-scenes videos for the series to the point where an impressive performance was highly probable anyway, but given the lack of a real star name or known behind-the-cameras talent (such as Buscemi and Scorsese), not to mention the perception of fantasy as an off-putting genre, Thrones' first episode performance was impressive.

Similarly, in the UK DVR and Sky Online viewings lifted Thrones' ratings from an already-spectacular 743,000 to a downright phenomenal 1.07 million (or over 10% of potential Sky viewers tuned in, which considering that drama makes up a very low percentage of Sky figures is startling).

For the second episode, HBO kept things ticking over nicely. The overnights for Thrones were 2.2 million, for the first showing alone, exactly the same as for the first episode. The overall figures will likely be down due to the fact that HBO aren't going quite so repeat-happy with the episode this week, but the fact that the show maintained its audience figures on a holiday weekend when the expectation from everyone was that we'd see a notable drop-off remains a solid achievement.

In the UK, Sky Atlantic delivered 531,000 (unadjusted) for the second episode, a significant drop compared to the first. However, the unseasonable weather in the UK (we're currently experiencing the sort of temperatures we normally see in July) and the fact that Bank Holiday Monday was an extra day off for most of the population meant that many more people were out and doing things than a week earlier. Also, the drop-off of 30%, although disappointing, is nowhere near as bad as what Boardwalk Empire experienced (dropping from 400,000 to well below 200,000 by its third episode). It is also possible that, for the reasons mentioned above, many more peopled timeshifted the episode this week than last. That figure will be interesting to see, hopefully later this week or early next. Episode 3's figures will likely be more telling for the show's future success in the UK.

So far, so good. Whilst a second season is in the bag, the ratings performance of the series overall will likely be a factor when HBO comes to decide whether to renew the show or not for a third season in a year's time, so the more success now, the better. But so far things are off to a good start.
Posted by Adam Whitehead at 22:21