After eighty years on the front lines, Commissar Ciaphas Cain is enjoying a relatively quiet semi-retirement tutoring students on Perlia, the site of one of his greatest victories. The period of peace is rudely interrupted when the hordes of Chaos, led by Abaddon the Despoiler, launch a vast invasion of the Imperium through the Eye of Terror. Fortunately, Perlia is on the other side of the galaxy to the main battlefront. Unfortunately, a major Chaos battle fleet is on its way to invade the planet and seize an ancient relic that Cain has dealt with before... 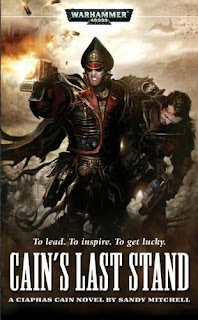 Cain's Last Stand is the sixth (of seven so far) books in the Ciaphas Cain series and sees author Sandy Mitchell fast-forwarding to near the end of his protagonist's career, right up almost to the 'present day' of the Warhammer 40,000 setting. Thanks to the SF setting, Cain and his constant companion Jurgen are still hale and going strong, though they're a bit more seasoned and experienced than earlier books focusing on their earlier days. Cain is somewhat less cowardly and more commanding here and has evolved into a fine tutor of commissariat students, trying to imbue them with a degree of common sense and intelligence in their dealings with demoralised troops. With Perlia in danger of attack and the planet's defenders mostly being inexperienced soldiers, it falls to Cain and his students to keep morale high in the face of overwhelming enemy numbers.

As with the previous books, this is an entertaining romp with black humour laced through it. The time setting also introduces an element of regretful nostalgia to proceedings: Cain remembering various people he's fought alongside and reflecting that many of them have died (from either natural causes or enemy action) during the preceding years.

Plotting-wise, Mitchell has taken a leaf out of Dan Abnett's book. Aware that these last three books would be assembled into an omnibus edition, he's laced ongoing storyline points through them which build to a huge finale. This works well, but the actual ending is actually a little disappointing in its lack of resolution and it's difficult to work out if it's a final one or setting up more adventures in future. Elsewhere the book is very busy, combining planetary politics, Cain's activities in the college and interactions with other tutors and his forging of his students into an effective force whilst also taking part in military action proving to be a lot of plot to pack into just 250-odd pages (in the omnibus edition). As a result the book moves very fast, but doesn't have time to build up the secondary characters as successfully as Mitchell normally manages.

Cain's Last Stand (****) brings this three-book arc to a successful conclusion and shines a different light on Ciaphas Cain to great effect. Not the series at its best, but relentlessly entertaining nonetheless. The novel is available now as part of the Ciaphas Cain: Defender of the Imperium omnibus in the UK and USA.
Posted by Adam Whitehead at 15:34