Four years after HBO first optioned the Song of Ice and Fire books, the TV series is finally almost here. The first episode of Game of Thrones, appropriately entitled Winter is Coming, will air on Sunday night on HBO in the USA and then on Monday on Sky Atlantic in the UK. British viewers get a special bonus as well: at 8.30pm Sky are showing a half-hour interview with George R.R. Martin conducted by fellow fantasy scribe Joe Abercrombie. 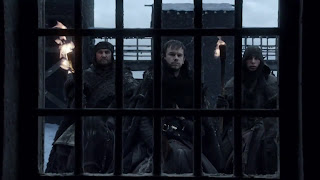 I hope to have a preview/first impressions of the first two episodes up on Saturday; thanks to a well-timed glance at Twitter, I managed to grab tickets to see them being aired in London tomorrow night on the big screen at a BAFTA event. A simple Google check will also uncover several dozen advance reviews of the first episode, from fans and newcomers alike, which suggest that the HBO team have done an excellent (but not entirely flawless) job.

Just as one production moves out of a long, almost arduous production schedule and finally hits the screens, another jumps into the same process. Peter Jackson has posted the first video blog about filming The Hobbit, production on which finally started last week:

The first part of the film will hit cinemas in December 2012.
Posted by Adam Whitehead at 17:23