The Aspect-Emperor, Anasurimbor Kellhus, is leading the Great Ordeal into the heart of the Ancient North. Hundreds of thousands of troops and thousands of sorcerers are heading for Golgotterath, the seat of the vile Consult, where they plan to destroy the Ark of the Heavens and obliterate the alien Inchoroi before they can resurrect the No-God and plunge Earwa into the Second Apocalypse. After the relatively painless opening leg of the march, the Ordeal now crosses through hundreds of miles of territory infested by the vile Sranc, whose numbers blanket the earth. For Sorweel, the young King of Sakarpas who has been sworn to Kellhus's cause but continues to harbour doubts, the Ordeal is doubly a nightmare, for he also seeks to avenge the death of his father and serve the gods, who, blind to the machinations of the Consult, are offended by Kellhus's temerity and fear his power. 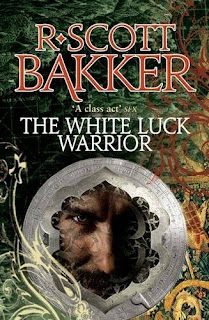 Elsewhere, the gods' fury makes itself known as the Cult of Yatwer allies itself to the Fanim to launch a devastating challenge against the New Empire. As the Empress, Esmenet, struggles to hold the Empire against this external threat she also faces internal crises; a growing schism with Maithanet, the Shriah of the Thousand Temples, and a force for chaos and destruction which is growing much closer to home...

The mercenaries known as the Skin Eaters have departed Cil-Aujas and now face a gruelling march along the 'Long Side' of the Osthwai Mountains, through a terrible forest and across vast plains to reach their destination: Sauglish, where Drusas Achamian hopes to find a map that will lead him to Ishual, the home of the Dunyain and the truth behind the Aspect-Emperor.

The White Luck Warrior is the middle volume of The Aspect-Emperor, itself the middle sequence of a much longer series called The Second Apocalypse. As such it carries us firmly into the second half of the overall series and, fittingly, it raises the stakes, expands the backstory and furthers the understanding of both the characters and reader of what is happening. The previous volume in the series, The Judging Eye, was very fine but also somewhat claustrophobic and lacked a satisfying conclusion (arguably only the Cil-Aujas storyline had a real climax). The White Luck Warrior has no such issues: it is a monumentally satisfying work of epic fantasy and probably the finest volume in this subgenre published for half a decade.

With this series, Bakker has taken the most basic of epic fantasy plots - a bunch of ugly bad guys want to destroy the world and wipe everyone out, only to find an ultra-powerful 'chosen one' rising to oppose them - and empowered it with motivation and ambition before not so much deconstructing it as tearing it apart and rebuilding it brick by brick. It's a work of fiendish intelligence, but also one of at times wearying nihilism and cynicism. This world is dark, cold and brutal, but the alternative is so dark and horrific that it is shown to be worth saving.

The White Luck Warrior sees Bakker achieving a near-perfect balance in his work. The Prince of Nothing trilogy was packed with philosophical asides which were often fascinating, but had a tendency to slow down the narrative (the problem being not so much that they were long, just that were a lot of them). In The Judging Eye Bakker reduced these asides quite a lot, resulting in a book where it felt like he was restraining his full powers in the service of accessibility. In this book he strikes a compromise between the two: Bakker's philosophical points are here locked to the story and the characters and made to service them. So discussions about the nature of belief, faith, damnation and redemption are relevant to the actual plot, the nature of the Outside and the gods, and cast intriguing new light on the nature of sorcery and the precise motivations of the Consult, the Inchoroi and Kellhus himself.

The plot is perfectly pitched as it moves between three primary storylines: the Great Ordeal as it battles its way through hordes of Sranc, mostly related by the young Sorweel; the long journey of the Skin Eaters, as told by Achamian and Mimara; and events back in the imperial capital, focusing on Esmenet and her increasingly disturbing child Kelmomas. Some other characters come in for brief periods, but the book's sharp focus on these three storylines results in a relentless pace that pushes the story forward at all times. Each chapter builds character, or reveals backstory, or hints at things to come or at things that have already passed. For a book almost 600 pages long in tradeback, there is no flab or filler, which is itself an impressive achievement.

The title of the novel and its 'middle book' status recall The Warrior-Prophet, the middle volume of The Prince of Nothing, and there are echoes of that novel here: the endless march into a desolate wilderness, resulting in supply problems, whilst, unexpectedly, the words and actions of Cnaiur are still driving events two volumes after his death. Most notably, after the mostly 'quiet' Judging Eye, Bakker brings back the badass here. Massive battles and huge sorcerous conflagrations make a comeback and are handled even better than before. At the same time, Bakker doesn't repeat himself: the Sranc represent a very different enemy to the Fanim of the first series. Elsewhere, Bakker's oft-criticised (sometimes justifiably) treatment of women is reversed somewhat here, especially when the Gnosis-empowered Swayal witches enter the fray and Mimara's discovery of the Judging Eye gives her soul-stripping powers that exceed those of the Dunyain.

Structurally, Bakker suddenly (and after the anti-climactic Judging Eye, unexpectedly) seems to have discovered the art of a perfect cliffhanger. To the point where he gives us no less than three of them, leaving yawning mysteries that need to be solved, characters walking into horrendous danger and huge battles about to be joined. He also deepens the sense of mystery in the series through carefully-measured revelations about the Consult, the Inchoroi and their goals (including the Consult's fixation on one particular numerical value). Expect fantasy forums to be buzzing as the full implications of these revelations are discussed in the coming months.

The White Luck Warrior (*****) is a powerful, engrossing, ferociously intelligent novel that sees Bakker at the very top of his game. It leaves the reader on the edge of their seat for the concluding volume of the trilogy, The Unholy Consult, which we need yesterday. The novel is available now in Canada, 5 May in the UK and 14 April in the USA.
Posted by Adam Whitehead at 18:43

I always forget how much I love Bakker in between books, and then each new Second Apocalypse novel reminds me and then some.

Well, well, lucky Canadian is here ;)
I just ordered the book online! I am having trouble deciding which cover art reflects this novel better. What do you think?
Thanks for your excellent review,

"Your Order has been shipped"-Barnes and Noble Status on The White Luck Warrior....I am sooo excited for this one!!!! I only read the last paragraph of the review, because I want NO SPOILERS! Im sure it was a good review though! Only a few more days now...

You just made me very excited :) Still waiting for my copy... and seconded about the "yesterday" remark!

I don't know what to think. You gush over this release and give it five stars -- which is all well and good, for I know Bakker to be at least capable of penning a five-star novel -- but you also gave The Judging Eye four and a half and it was pretty dreadful. I think this will be a library loan.

Nick, I completely feel your apprehension. Judging Eye was at best an average book, and looking at Wert's review, I completely disagree with it. But 200 pages into White Luck Warrior now and I'm enjoying it a lot more than I did JE. If Bakker keeps up this quality it should be an excellent book.

Awesome review. I can't wait. My interest flagged a bit with the last book, where I felt Bakker was not at the top of his game. Your review means the adventure continues!

Thank you for an insightful review. I ordered The White Luck Warrior today.

Just finished reading The White Luck Warrior and it was far superior to the (anti-climactic) Judging Eye. Couldn't put it down. I loved the fact that he's integrated more of his philosophical arguments into the actual narrative and dialogue itself, as opposed to often using asides like he did in the previous series.

In any case, very much looking forward to the third book in the trilogy... hoping it won't be another two-year wait!

I am nearly done with the "white luck warrior" and to be honest it has felt a bit of a chore. I liked the first series as it did feel a bit different and more real than most fantasy as there are no farmers/orphans/serfs who somehow become king of everything. However I think Bakker has over-compensated as his "reality" has most men as evil rapists and all women as prostitutes. Also the continuous philosophy is a bit forced - I do not want to feel I am being force-educated when I am reading a novel. Still it is holding my interest enough and I will probably get the next book and hope there is a bit more balanced. I think Bakker could really produce a fantastic novel if his editors could cut down the self-Indulgence.