AD 886. Paris is under siege by the Vikings under King Sigfred, but the city's tall walls and outlying towers are preventing them from carrying the city by assault. The reasons for the siege are curious: the Vikings want a noblewoman, the Lady Aelis, and will leave if she is given to them. But she is unwilling to sacrifice herself to save her city. Jehan, a crippled monk held to be a living saint, is called upon to convince her to do the honourable thing...but Jehan worries that the Vikings don't want Aelis as a wife or hostage, but as a sacrifice, and surrendering her to pagan murder could imperil the defenders' souls. 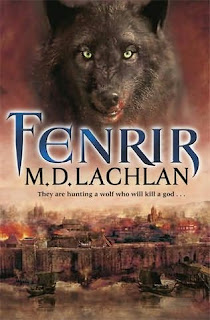 But the truth of the matter is far stranger. Decades ago Odin, Loki and the wolf known as Fenrir fought a battle of wits and wills revolving around the lives of three mortals. The mortals died, Odin was thwarted and Loki triumphant...but the wheel has since turned and the mortals' souls have been reborn. And now the game has begun anew.

Fenrir is the follow-up to M.D. Lachlan's splendid Wolfsangel, a sequel which picks up the story with the same souls but now incarnated in different bodies. Whilst some blurbs suggest that Fenrir can be read independently of the earlier book, this is not really the case. Callbacks to the earlier book are fairly subtle at the start, but become increasingly overt as the novel continues, until specific events from the first book are being referred to. For this reason I recommend reading Wolfsangel before proceeding with this book.

Wolfsangel was interesting in that it alternated prose styles between the more straightforward action-adventure part of the narrative and the mystical, spiritual side of things. Fenrir is more ambitious as it combines the two sides of the story into a more cohesive whole, which works well. The book also expands its scope, with a larger cast, a greater geographic spread (the second half of the book is effectively an epic journey from France to Ladoga, near modern-day Saint Petersburg) and also explores more themes than the first novel. Religion is particularly prominent, since Jehan is a Catholic monk and his faith clashes with that of the Vikings he comes into contact with. This leads to one of the book's rare humourous tangents, as initially the Vikings are uninterested in Jehan's religion, but a series of freak events deliver them riches and victories after they allow Jehan to preach, leading to them wanting to convert because they think Jesus will make them rich, which Jehan considers an unworthy motivation.

Characterisation is pretty good. Aelis, Jehan, Leshii and Ofaeti are particularly well-drawn protagonists, but Hugin and Munin are harder to pin down. Hugin's character in particular shifts during the course of the nove, but the fact we only see him through other characters eyes makes him tricky to get a handle on. Some of the shifts in character, as 'flashes' from the earlier incarnations break through to the present, are also difficult to understand unless you've read Wolfsangel and know which character from that book has been reincarnated in this.

The dark, visceral horror of the situation is portrayed starkly, and there are moments of raw terror and bloody mysticism which Lachlan handles well. The first half of the novel also unfolds at a terrific pace. Unfortunately, things bog down a little after that: there's maybe a little too much running around in circles in the woods outside Paris or on the beaches of the North Sea before the plot gets going again. The plot also hinges on some awfully big coincidences which the reader may find hard to swallow, divine intervention or not.

Lurking over everything, however, is the notion that the gods have set in motion a series of events that will be fulfilled despite the wishes of mortals, but that mortals will fight against that fate no matter the cost. Again and again the book reinforces that desperate heroism, and in doing so captures something mythic and powerful.

Fenrir (****) is a dark, brooding story of violence, mysticism and death, but it's also a story of hope and faith. The novel will be published on 21 July 2011 in the UK and on import in the USA on the same day.
Posted by Adam Whitehead at 15:52

this sounds really cool! I'd read some reviews of Wolfsangel, and it sounded good, but this sounds better! but I better start with the first book, right?