Unfortunately, the sad news broke this evening that Doctor Who actress Elisabeth Sladen has passed away from cancer at the age of 63. 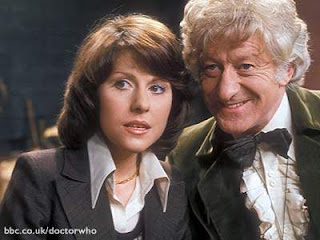 Elisabeth Sladen as Sarah-Jane Smith alongside Jon Pertwee as the Third Doctor in 1973.
Sladen played the role of journalist Sarah-Jane Smith, arguably the Doctor's most iconic companion, over a period of almost forty years. She first appeared in the serial The Time Warrior, the first serial of Season 11, in December 1973 and was the regular companion until the end of The Hand of Fear, the second serial of Season 14, in October 1976. Her time on the show overlapped the departure of the Third Doctor, Jon Pertwee, and the arrival of the fourth, Tom Baker. Her departure from the show was marked by news headlines, the first time this happened for the departure of a companion. Sladen returned to the role in 1981 in a pilot for a possible spin-off series, K-9 and Company, but the series was not picked up. This was followed by a return for the 20th anniversary special, The Five Doctors, in November 1983, reuniting her with Jon Pertwee for one story.

In 2006 Sladen rejoined the show for the episode School Reunion, alongside David Tennant as the Tenth Doctor. The episode was very well-received and Elisabeth Sladen was asked by producer Russell T. Davies to helm a spin-off series, The Sarah-Jane Adventures. Sladen agreed (though she has also made several return appearances in Doctor Who itself) and the spin-off series began in 2007, notching up 4 seasons and 47 episodes. Production on a fifth season began in 2011, but production had to be suspended after three episodes were filmed due to Sladen's illness. 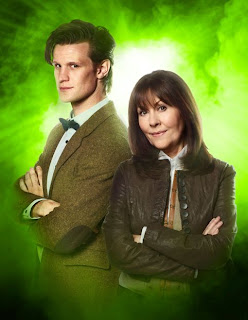 Elisabeth Sladen alongside Matt Smith as the Eleventh Doctor in an episode of The Sarah-Jane Adventures aired in 2010.
This is terribly sad news. Elisabeth Sladen was, by all accounts, a tremendously well-respected and professional actress. Her performance as Sarah-Jane entertained an entire generation of young British fans of Doctor Who and her return to the show thirty years later entertained another, as well as giving her a late career renaissance. Coming so soon after the news of the passing of her co-star Nicholas Courtney (who played Brigadier Lethbridge-Stewart alongside Sladen several times, most recently on The Sarah-Jane Adventures), this is a particular blow.

Condolences to her friends and family. Doctor Who has lost one of its most iconic and treasured actors today.
Posted by Adam Whitehead at 19:55

Email ThisBlogThis!Share to TwitterShare to FacebookShare to Pinterest
Labels: doctor who, memorials, news

I'm decidedly sad over this news. She was my first companion when I was a kid. She'll be greatly missed.

Well said. She will be missed.

Sarah Jane was my first companion, too. This is tragic news. Nice tribute.

Bit of a correction. Production of Series 5 wasn't suspended. The powers that be decided to film half the season back-to-back with Series 4, and then the second half in the spring of this year. It's possible Sladen's health may have been a factor, but there's no indication production was "suspended" after the three stories (not episodes, stories - so that's 6 episodes since they do two-part stories) due to her health.