On Stranger Tides by Tim Powers

The Caribbean, 1718. Jack Chandagnac - Jack Shandy - is sailing to Haiti to reclaim some property when his ship is boarded by pirates. Shandy is recruited onto the pirate crew and becomes aware of a bizarre conspiracy that is unfolding between one of the passengers, Benjamin Hurwood, and the feared pirate Blackbeard, involving Hurwood's daughter Beth and the mythical Fountain of Youth. Shandy is soon drawn into a strange and magical quest set against the backdrop of the dying days of piracy in the Caribbean. 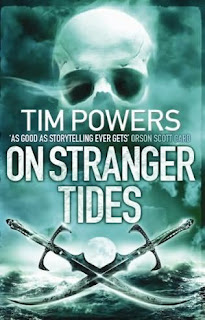 On Stranger Tides is arguably Tim Powers' most well-known and influential novel. Published in 1988, it has been quoted as one of the primary inspirations behind both Ron Gilbert's splendid Monkey Island computer games and also the Pirates of the Caribbean film franchise, to such an extent that the film producers bought the rights to the novel and the imminent fourth film in the series is both named for and draws on some of the plot elements of the book. Yet it's not quite the swashbuckling, good-time adventure that the those later works would suggest.

On Stranger Tides is rich and full of vibrant colour that brings alive the setting, but it's also weird, offbeat and often downright bizarre. Jack Shandy is a reluctant hero who spends a fair amount of time moping around and musing on his bad luck rather than getting on with business (especially in the second half of the novel, dissipating dramatic tension rather than building it up) whilst Beth is a fairly weak character lacking much motivation, rather disappointing given there aren't many female characters in the novel (in this regard the inspired works have done a better job; Beth is no Elaine Marley and isn't even an Elizabeth Swann). On the plus side, the likes of Blackbeard and Davies make for more interesting characters, though as one of the main villains Ben Hurwood lacks any real defining characteristics beyond being insane.

The writing is crisp, clear and flows nicely, with Powers conjuring up some dark and threatening vibes whenever seriously weird voodoo goes down. He's also good at the skirmishes, with cutlasses flashing in the sunlight and pirates and navy crewmen urgently reloading their pistols and boarding one another's ships with wild abandon. There's also a nice maudlin feeling evoked at the dying of the pirate culture in the face of increased colonisation of the islands from Europe, though Powers never lets the reader forget that, for all its romantic image, piracy was built on theft, pressganging and murder. 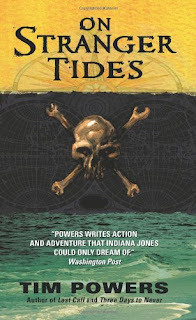 On Stranger Tides is thus a mixed bag: the central plot starts and stops a bit erratically, and some well-rounded, three-dimensional characters with well-explained motivations sit uneasily next to cliches and cyphers. The dark and foreboding atmosphere evoked by the magic is impressive, but then tends to be undermined by the 'science' of voodoo, which sometimes reduces it to just another fantasy magic system. The action sequences are rousing, but infrequent. But overall the novel has a strange, offbeat atmosphere that is interesting and, if the plot doesn't flow as well as it could, the weird collection of characters and their antics makes for an enjoyable, if not entirely page-turning, reading experience.

Though I think I may have read this book at exactly the right moment, in precisely the ideal frame of mind for swashbuckling whimsy, and at just the perfect pace. But hell, I had such fun with On Stranger Tides, so no complaints here. In fact I'm inspired to see the new Pirates of the Caribbean just to see how it does, or does not, translate - which after the last few embarrassments I wouldn't have imagined myself saying otherwise, not ever.

This is one of my favorite Powers novels! I think if you come to it expecting a swashbuckling pirate story you're going to be dissapointed. If you come to looking for a crazy weird Tim Powers story, you'll enjoy yourself.

maybe Powers is an acquired taste, not unlike China Mieville?

I enjoyed the book but rather sad that it has been turned into a Jack Sparrow movie. Would have been better on its own.

I think you have to be in the right frame of mind to read any Tim Powers novel.

But if you are in that zone, then his brilliance can be fully appreciated.

As far as I can tell, the PotC movie has no characters from the books apart from Blackbeard (casting him with Ian McShane is a great idea though) and no plot elements apart from the central idea of a Fountain of Youth. So I'm not expecting much similarity between the two.

Something that's weird is SFX last month talking about Penelope Cruz's character Angelica (Blackbeard's daughter) being in the book, when she isn't.