HBO have optioned the television rights to Neil Gaiman's multi-award-winning novel American Gods. Gaiman is co-writing the script with Robert Richardson (who has won two Oscars for his work on JFK and The Aviator), whilst Tom Hanks is set to produce. 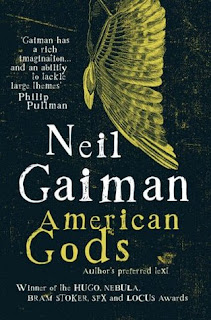 Interesting news. Clearly the buzz over Game of Thrones has meant that TV companies are starting to look for other adult fantasy books to adapt. However, whilst understandable from a production standpoint - American Gods is far less ambitious and thus less expensive - I'm disappointed they didn't go straight for the jugular and adapt Sandman. Still, this should be interesting.
Posted by Adam Whitehead at 11:35

Yeah, but how would they adapt The Sandman series? Choose a particular ongoing arc and then fill in certain episodes with one-offs? I have the whole bloody series downstairs and it still fills me with a sort of glorious confusion, that's fine for comics I think, but might be a bit much for a TV series.

On the other hand I quite like the idea of an American Gods series, I enjoyed the book, though I'd love a short webisode adaptation of his Study in Emerald short story. Lovecraftian inspired Sherlock Holmes fun, that I'd love to see.

To be fair; American Gods is far easier to adapt than "sandman" mainly because the narrative follows a central cast as opposed to the large cast of Sandman.
What will be interesting is how faithful they decide to be with the source material. If they stick with the book then it's going to be a miniseries ala "band of Brothers" or "John Adams".
What may be more interesting is if they take the idea and run with it - keeping the central plot but fleshing it out so with more "american gods" featuring. Each episode/arc could be featuring different gods along the roadtrip.

fantasy folder: HA! like there would be any chance in high hell that brandon would want a adaptation of his series THIS early.

Me personally, I,d like to see HBO take on either EARTHSEA(it's at least worth a try, right?) or THE BOOKS OF MAGIC(another gaiman classic).