Due to time constraints and the fact the episode was about to air anyway, I'd decided to hold off on a more in-depth discussion of the first episode of Game of Thrones for a little while. Expect that soon. 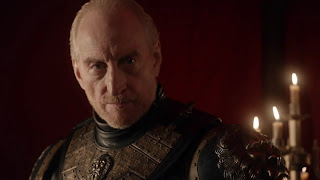 Tywin Lannister approves, and will not now unleash some Rains of Castamere on viewers.
In the meantime, ratings information for the show has started to come in. The 'overnights', the first-night ratings, were the first sign of the show's success. Vulture Entertainment reported that it got a 1.6 share which translates at somewhere between 2.5 and 3 million viewers. However, this was for the first showing of the first episode and perhaps the initial repeat. The repeats on the second day were not counted, and nor were time-shifted or DVR or HBO On-Demand viewings. There's also some confusion on whether just HBO subscribers or additional viewers (HBO had a free pass weekend) were counted as well. Combined these should push the ratings comfortably further up, and news on those ratings should come in later today. Some have panicked that the show didn't get the 5 million viewers Boardwalk Empire got on its first viewing, but that was a huge outlier and came off the back of True Blood, HBO's monstrous megahit, which Thrones is now leading into. Compared to a lot of other HBO shows (including True Blood itself, which started with less than 2 million viewers), Thrones has done pretty well.

Even more impressive is its ratings success in the UK. Thrones is airing on Sky Atlantic, a new channel which only launched eleven weeks ago. Furthermore, whilst Sky is in a lot of homes in the UK (just over 10 million, or about a quarter of the total number of households in the country) its television drama ratings have historically been pretty low: Battlestar Galactica typically got 100-200,000 viewers on the far better-known and more-established Sky One and was counted as a success. Also on Sky One, Lost got about 400,000, rising to 600,000 for the finale, and was counted as a big hit for them. Boardwalk Empire got 400,000 when it debuted as Sky Atlantic's flagship show in February (dropping down to 200,000 within two weeks) and was counted as a success.

So all of these factors mean that Game of Thrones getting 743,000 viewers for its first hour has sent Sky representatives into paroxysms of happiness on Twitter. This is a huge and unexpected success. I expect to see a big drop-off for the second week, as that always happens plus it's a holiday weekend, but even so this bodes well for Sky's future coverage and sticking with the programme.

UPDATE
It turns out that the initial figure Vulture reported - which was actually 2.2 million - did not include the Sunday night repeats. With these GoT has been pushed up to 4.2 million, which is excellent news. And that's still not factoring in DVRs, time-shifted viewings, HBO On Demand or the Monday night repeats. So that's smiles all round at HBO HQ then :-)
Posted by Adam Whitehead at 11:00

I'm hoping the ratings carry over relatively intact. If we could get two or three episodes of solid ratings, the show is easily a shoe-in for getting renewed for a second season.

I think the second season would be a huge draw, too. There's an incredible amount of action in Clash of Kings (my favorite of the four books so far), and lots of Tyrion awesome-ness.

I hope they slow down a little and explain what is going on. Without the book knowledge my wife didn't get a lot of the scenes in the first episode.