Prince of Thorns by Mark Lawrence

A hundred petty warlords are struggling to carve their own pieces out of the Broken Empire, the divided remnants of a glorious, high-technology society obliterated in a monstrous war. Little has survived from before that time aside from a few books of philosophy and war, and religion. 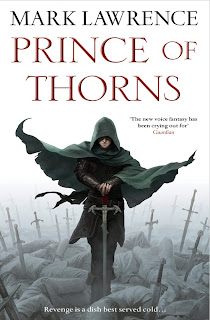 Prince Jorg, the son of King Olidan of Ancrath, is a boy of nine when he sees his mother and brother brutally murdered by agents of Count Renar. When Olidan makes peace with Renar in return for a few paltry treaties and goods, Jorg runs away from home in the company of a band of mercenaries. As the years pass, Jorg becomes cruel, merciless and ruthless. He sees his destiny is to reunite the Broken Empire and rule as the first Emperor in a thousand years, and nothing and no-one will deny him this destiny.

Prince of Thorns is the first novel in The Broken Empire, a trilogy which was fiercely bidded over by several publishers before HarperCollins Voyager won the publishing rights in the UK. It's being touted by Voyager as 'the big new thing' for 2011, to the extent where they are even giving away copies to people who have pre-ordered A Dance with Dragons from certain UK bookstores.

This faith is mostly justified. Prince of Thorns is a remarkable read. Well-written and compelling, it is also disturbing. Anyone who's ever bailed on reading Donaldson's Thomas Covenant books because of a horrific thing the main character does a couple of chapters in will probably not enjoy this book either. Jorg is a protagonist with the quick wits of Locke Lamora, the charm and resourcefulness of Kvothe but the moral compass of Gregor Clegane. The book has the protagonists (the word 'hero' is completely incompatible with Jorg or his merry band of psychopaths and lunatics) doing things that even the bad guys in most fantasy novels would balk at, and for this reason it is going to be a challenging sell to some readers.

Lawrence writes vividly and well. The dark and horrible things that Jorg and his crew get up to are mostly inferred rather than outright-described, which is just as well. Lawrence also avoids dwelling on Jorg's physical actions too much in favour of delving into his psyche, working out what makes him tick, presenting these ideas to the reader, and then subverting them. As the book unfolds and we learn more about Jorg's hideous experiences, we realise why he is the way he is, though at almost every turn Jorg also chides the reader for thinking he is trying to excuse himself or beg for forgiveness. He is simply presenting the facts and the context and leaves them to decide whether he is the logical result of circumstance or someone who could have saved himself from this dark path if he had chosen to do so. Lawrence's aptitude with the other characters is no less accomplished, with deft strokes used to create vivid secondary roles concisely and with skill.

Outside of the excellent characterisation, Lawrence paints a vivid picture of a post-apocalyptic world. The ruins of an earlier, technological age (probably our one, though the map suggests that if it is, the geography of the world has been radically transformed, at least in the area the story takes place) paint the landscape, and it's interesting to see references to familiar names and places. The works of Plutarch, Socrates and Sun Tzu have survived, as has the Christian faith, and in the distant east place-names sound more familiar (Indus, Persia). This evokes the feeling of a world broken and twisted, the new rammed in with the old, the effect of which is unsettling (I think it might be what Paul Hoffman was going for in The Left Hand of God, but Prince of Thorns does it much better). I assume more about the world and the history will be revealed in the inevitable sequels. Whilst Prince of Thorns is the opening volume in a trilogy, but also works well as a stand-alone work. Whilst there is clearly more to come, it ends on a natural pause, not a cliffhanger, which is welcome.

This is a blood-soaked, cynical and unrelentingly bleak novel, but it also has a rich vein of humour, and there are a few 'good' (well, relatively) characters to show that there is still hope in the world. There are some minor downsides: a few times Jorg seems to 'win' due his bloody-minded attitude overcoming situations where he is phyiscally or magically outclassed, and there's a few too many happy coincidences which allow Jorg and his men to beat the odds, especially right at the end. There's also an event about three-quarters of the way through the novel which is highly impressive, but may be a bit hard for some fantasy fans to swallow.

Prince of Thorns (****½) is a page-turning, compelling and well-written novel, but some may be put off by its harsher, colder aspects. Those can overcome this issue will find the most impressively ruthless and hard-edged fantasy debut since Bakker's Darkness That Came Before. The novel will be published on 2 August in the USA and two days later in the UK.

EDIT: Interesting. Updating labels seems to have caused the whole post to be republished. Odd.
Posted by Adam Whitehead at 14:29

Wow, can't wait to read this.

Well then, sounds like a must buy, good review Wert!

Out of interest, are the "good" characters presented as allies of Jorg, or as enemies? It sounds like a fairly twisted thing, to make you sympaphise more with the people who the protagonist might go up against, and if so, I approve all the more.

I have been really intrigued by this title since i first heard of it... Then a comparison to R. Scott Bakker??? Now I'm sold...

Looks like a great read, I've just put down my deposit for Dance of Dragons at Waterstones and I beliver they are giving this book away free with those who pre order.....so very chuffed.

Glad you've reviewed this because the cover makes it look like the worst sort of generic rubbish in the "cloaks& swords" category :)

"Well-written and compelling, it is also disturbing. Anyone who's ever bailed on reading Donaldson's Thomas Covenant books because of a horrific thing the main character does a couple of chapters in will probably not enjoy this book either"

Aw, man. While I finished Lord Foul's Bane I didn't continue with that series precisely because of what Thomas does.

Can someone explain me why the German translation is out since May 9th while the English original is not out before August?!

I read the book in two days. I was quite reluctant, because what Jorg does is really disturbing to say the least. I am also no fan of violence, I think several British authors I quite like to read usually have gone over the top with it lately. Read Abercrombie and Richard K. Morgan. I was almost sure Prince Jorg is just another over the top freak kind of character.

I was damn wrong! This is a fascinating read with several intelligent twists.

It's hard to explain - Jorg was bad enough to disgust me, but at the same time I could not really be angry at him or the book. And there was always something to amuse me.

Reading a book on the buttcheeks of a whore for example - that will probably be a long-time favorite of mine!

Jorg is a protagonist with the quick wits of Locke Lamora, the charm and resourcefulness of Kvothe but the moral compass of Gregor Clegane.


Great description in terms that fantasy readers will immediately understand

I loved the whole trilogy. What did you think of King and Emperor? I read most people like those books better.

Great review, thanks! Will you be reviewing the rest of the trilogy now it's out?