Norway, 1942. A Nazi special weapons division commanded by Johann Schmidt secures an ancient artifact of unknown origin but incredible power, which they hope to use to power a new, more advanced war machine. At the same time, in New York City, Steve Rogers is rejected from joining the US Army due to a significant number of health issues. Frustrated, he tries to falsify documents in order to enlist. Impressed by his tenacity, Dr. Abraham Erskine instead recruits him for a top-secret programme, designed to create the ultimate soldier using technology. Rogers becomes Captain America, just as Schmidt (adopting the alias, 'the Red Skull') breaks away from his Nazi masters to undertake his own mission of destruction and world domination. 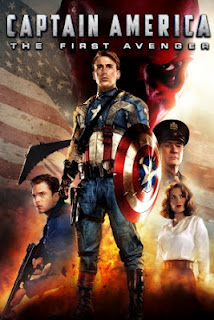 Captain America: The First Avenger is yet another piece in Marvel's 'cinematic masterplan', of tying together different characters into a single coherent universe. This plan - which also incorporates Thor, The Incredible Hulk and the two Iron Man movies - culminates in The Avengers, which recently hit cinemas. With Captain America, Marvel resist the urge to bring the character immediately into the present, instead giving him a full origin story set in WWII. This sets the film apart from its contemporaries and allows Rogers' patriotism to be established in full at a time of good vs. evil before bringing him into the murkier present.

The film is anchored on Chris Evans's performance as Rogers/Captain America (Evans previously played the Human Torch in the two Fantastic Four movies), which is decent. A problem with the Captain America character is that unabashed American patriotism isn't a concept that travels well abroad. However, taking a nod from the comics where the same issue has come up a few times over the years, Evans plays the character as a good man who wants to do his part and isn't a blind follower of American policy. Later in the film the character becomes based in London and leads an international team of agents in taking the fight to the Red Skull, mixing things up in a more interesting manner. A combination of Evans's performance and impressive CGI also totally sells the illusion of the puny, short and unhealthy Rogers in the opening sequences of the film before his transformation into the buff Captain America.

Other performances are good, with director Joe Johnston opting for safe and reliable actors in many of the roles: Tommy Lee Jones plays a brash US general who gets the best lines in the movie (as may be expected), with Stanley Tucci bringing eccentricity and humanity to the role of Erskine. Hugo Weaving as the Red Skull and Toby Jones as his sidekick Dr. Zola also form a solid double-act (though Weaving occasionally slips into 'auto-pilot evil', this being a role he could do in is sleep). Hayley Atwell provides solid support as British agent Peggy Carter. The potential for saying something interesting as a British female agent working alongside square-jawed American soldiers in wartime is squandered, however, with Carter characterised as a 'plucky British gal' and not developed much further beyond punching out a solider who makes a sexist comment before she falls for the hero. The ever-reliable Neal McDonough also appears as one of Rogers's international team of agents, though aside from a truly outrageous moustache he is not very distinguishable from the very similar roles he's played before on Band of Brothers and Minority Report.

The film adopts a cool retrofuturistic (or 'Americanapunk') tone at times, with Johnston clearly tapping the same well as his entertaining early-career picture, The Rocketeer. There's a playful sense of humour at times, and Captain America deserves some plaudits for being the first contemporary superhero movie to transform into a musical for ten minutes halfway through (rationalised in the storyline). However, its musings on patriotism, warfare and heroism rarely rise above the predictable. The plot is pretty straightforward, although well-paced with some good action sequences. The links to the rest of the Marvel cinematic universe are downplayed to a few appearances by Tony Stark's father and the now-traditional appearance of Samuel L. Jackson as Nick Fury in the movie's closing moments (interestingly, in the actual finale of the movie rather than a post-credits sequence). This allows the movie to stand alone as an independent piece of entertainment.

The film's biggest problem is a total lack of surprise or tension. It's a solidly-made piece of entertainment which relies on its period setting as its sole distinguishing feature from its contemporaries. The actors and director all do good work and it certainly passes the time enjoyably enough, but it lacks long-term appeal.

I found the movie to be lacluster and boring. It is predictable as hell and the futuristic technology in the Red Skull's arsenal makes no sense in the context of the war.

There are silly (and not in a good way) moments throughout the movie and its emotional impact is negligibale (exemplified with the supposed huge personal loss in the train scene).

It is definitely the worst Marvell movie I've seen in years.