Mapping Daenerys's journey in A SONG OF ICE AND FIRE

With the arrival of the semi-canon world map produced by HBO for the Game of Thrones TV series, it is now possible to - at least roughly - chart the journey undertaken by Daenerys Targaryen in the Song of Ice and Fire novels. This has long been a subject of much discussion amongst book fans due to the absence of maps of the eastern continent in the books.

Note that if you are only familiar with the TV series, this article contains significant spoilers for later events from the books. 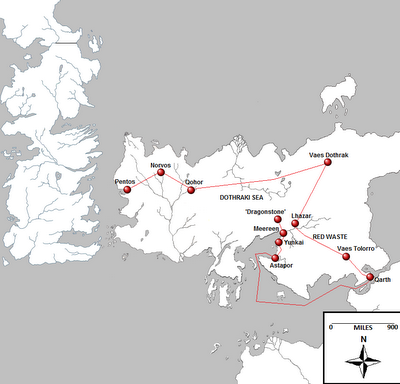 Note that the scale on the above map is approximate, and all distances given are approximate as well. It's also worth noting that the HBO map (on which the above is based and which in turn was based on George R.R. Martin's rough draft map) is canon only up to (roughly) Vaes Tolorro. The precise location of Qarth and the shape of the landmass around it will be clarified in The Lands of Ice and Fire (due in October), though I doubt the distance will be radically different.

A Game of Thrones opens with Daenerys and her brother Viserys living in the Free City of Pentos as guests of Magister Illyrio Mopatis. Mopatis and Viserys arrange the marriage of Daenerys to Khal Drogo of the Dothraki. They then leave Pentos for the Dothraki city of Vaes Dothrak, which lies approximately 3,000 miles to the east, on the far side of the Dothraki sea. The khalasar travels via the Valyrian straight roads for maximum speed, passing through the Free Cities of Norvos and Qohor along the way. They then leave the Valyrian roads and strike out through the vast Forest of Qohor (taking two weeks to cross it) before arriving on the far western edge of the Dothraki sea. The route they take across the sea is unclear, as the HBO map reveals the presence of a large river and an area of lakes in the midst of the Dothraki sea. The Dothraki may have had to have gone around or simply crossed straight through the middle.

Drogo and Daenerys then spend a period of time - several weeks at the very least but possibly months - in Vaes Dothrak (where Viserys meets his gold crown-assisted end). Drogo's khalasar then strikes south for the lands of the Lhazareen, where he plans to take many slaves and herd them downriver to Meereen to sell them to fund an invasion of Westeros. As we know, this doesn't exactly work out as, thanks to Mirri Maz Duur, Drogo is reduced to the state of a vegetable, forcing Daenerys to put him out of his misery. The book ends with the hatching of Dany's dragons somewhere south of the Lhazareen lands, on the edge of the Red Waste.

Compared to her long trip in the first book, A Clash of Kings sees Daenerys facing a much shorter - but far harder - journey. She and her much-reduced khalasar have to cross the Red Waste, a forbidding landscape of arid plains and deserts which stretches southwards for over a thousand miles. Fortunately, her khalasar finds refuge in the abandoned city of Vaes Tolorro (and fans can debate the plausibility of Dany's followers surviving a journey of over 800 miles through harsh terrain with limited supplies) and is able to regroup before completing the journey to Qarth, the great city which guards the straits linking the Summer Sea to the Jade Sea.

At the end of the novel, Daenerys and her followers board Illyrio's ship, planning to return to Pentos by sea.

Obviously, the plan to return home by sea doesn't exactly work out. Thanks to Ser Jorah Mormont's "It sounded like a good idea at the time," plan to stop off at Slaver's Bay to hire an army of Unsullied, Daenerys ends up fighting a war she never really planned, liberating tens of thousands of slaves but also bringing massive amounts of death and destruction to the lands of Slaver's Bay. This culminates in her plan to remain in Meereen and learn the art of rulership.

Daenerys spends most of the novel in Meereen trying to work out how to extricate herself and her followers from the quagmire she has inadvertently stumbled into, and ends up being paralysed by indecision. However, towards the end of the novel she does make a final journey of several hundred miles on the back of her largest dragon, Drogon, into the southern edge of the Dothraki sea. There she finds refuge on an isolated hill she dubs 'Dragonstone' in memory of the island of her birth. Some time after that, she encounters a Dothraki khalasar with her dragon at her side. And that's where she'll stay until The Winds of Winter reveals what happens next.

Total: 8,466 miles (with a fairly large error margin of a few hundred miles either way by this point)


The map also raises some interesting questions about what will happen next. We know there will be a huge battle at Meereen between its besiegers and defenders, with the ironborn (and their magic horn of dragon summoning) and the mercenaries Tyrion is trying to woo as unpredictable elements. Whether Daenerys returns home by land or sea (or air!), she may find her job has already been done for her, as ten thousand warriors of the Golden Company have already begun their own invasion of Westeros following her (alleged) nephew, Aegon VI. How exactly that unfolds will be fascinating to watch (though I doubt we'll see it soon).
Posted by Adam Whitehead at 00:09

Email ThisBlogThis!Share to TwitterShare to FacebookShare to Pinterest
Labels: a clash of kings, a dance with dragons, a game of thrones, a game of thrones (TV series), a song of ice and fire, a storm of swords, george r.r. martin, maps

All that travelling and still Dany's parts are only as remotely interesting as the Westerosi/North parts. :(

I'm with you. Just can't seem to get into her part of the story for some reason

considering the speed of the slaves walking, they could cover 15-20 miles a day. with the extended stay in Vaes Dothrak and Quarth and the probably reduced speed in the red waste because of malnutrition, exhaustion etc they were easily 2 years or more traveling....

that is the length of the US canada border roughly

"that is the length of the US canada border roughly"

please remember the prophecy given by Quaithe as to the direction she will need to go to get home. she must pass beneath the shadow and go the whole way around the world the other way. this will be the intersting part as the known world isnt mapped that far for fans or the people living there

No. Dany isn't going to Asshai and around the world. There isn't anywhere near enough time to get there going that way (if Martinworld is the same size as Earth, it would be a 2-3 year trip, by which time the Others might be having snowball fights in Dorne). Plus GRRM has said that we will not see Asshai in the flesh in the books, only in flashback at best.

GRRM said that he wanted to end the series in the winds of winter book which he says can't be done now but I feel he wasted a dance of dragons by not letting dany actually do anything to really progress the story, the whole book was a massive stall in the story and just means we're going to have to wait longer for the hopefully epic conclusion in a seventh book which will take years to come out.

The Winds of Winter hasn't been planned to be the final book in the series for some considerable time, at least since before 1998, when a listing of the books said there would be one more after Winds. That was A Time For Wolves, which GRRM found a slightly unsatisfactory title and changed for A Dream of Spring.

After looking at that map and Daenrys' path, now I know why Viserys was SOOOO pissed. LOL