GAME OF THRONES renewed for a third season

HBO has renewed Game of Thrones for a third season. The news comes after the show scored a colossal 33% ratings increase for the first episode of Season 2, jumping from 3 million for the Season 1 finale to just short of 4 million for the opening of the second run. The second episode scored 3.8 million viewers, holding onto 97% of the audience from the premiere episode. 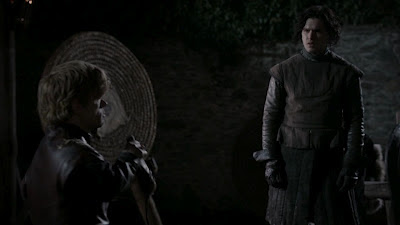 This is an impressive performance for the show, especially following extremely strong sales of the Season 1 DVDs and Blu-Rays.

Season 3 of Game of Thrones will air in 2013 (probably April again) and will be based on the first half or so of A Storm of Swords, the third novel in A Song of Ice and Fire. The novel's massive size (half again the length of A Game of Thrones) prevents it from being adapted in just one season. According to the producers, Season 3 will likely end with an event codenamed 'RW' (which will likely be as impenetrable as tissue paper to people who've read the novels). David Benioff and D.B. Weiss will be producing and writing once again, and George R.R. Martin is expected to contribute one episode. However, one disappointment is that Alan Taylor, the show's most acclaimed director (he helmed the last two episodes of Season 1 and four episodes of Season 2, including the first two), will only be back for one episode next year. He has been picked to direct Marvel's Thor 2, which will clash with the filming of most of the third season.

The third season is expected - once again - to be 10 episodes in length, although this has not been formally confirmed yet.

The renewal comes after speculation that HBO was considering ordering  two seasons at once. This would have several benefits, such as allowing the showrunners to segue from making one season straight into the next, without having to put things on hold for the renewal notice, and would also give the showrunners a full season's notice of cancellation, allowing them to insert some kind of resolution. Clearly HBO chose not to pursue that option at this time.

LOS ANGELES, April 10, 2012 – HBO has renewed GAME OF THRONES for a third season, it was announced today by Michael Lombardo, president, HBO Programming.
“Series creators David Benioff and D.B. Weiss raised our expectations for the second season – and then surpassed them,” said Lombardo. “We are thrilled by all the viewer and media support we’ve received for the series, and can’t wait to see what Dan and David have in store for next season.”
Based on the bestselling fantasy book series by George R.R. Martin, GAME OF THRONES is an epic drama set in the world of Westeros, where ambitious men and women of both honor and ill-repute live in a land whose summers and winters can last years. The Emmy®- and Golden Globe-winning fantasy series began its ten-episode second season Sunday, April 1 (9:00-10:00 p.m. ET/PT), with other episodes debuting subsequent Sundays at the same time.
Among the early critical praise for the second season, Newsday called GAME OF THRONES “the best show on television,” while the Los Angeles Times termed the series “a cinematic feast” and “masterful.” The Wall Street Journal hailed the show as “magnificent” and USA Today called it “near perfection.”
According to early data, GAME OF THRONES’ season two premiere has already accumulated a gross audience of 8.3 million viewers, and is on track to easily surpass the season one average of 9.3 million viewers.
Season two cast members include: Emmy® and Golden Globe winner Peter Dinklage, Michelle Fairley, Lena Headey, Emilia Clarke, Nikolaj Coster-Waldau, Aidan Gillen, Iain Glen, Kit Harington, Richard Madden, Maisie Williams, Isaac Hempstead Wright, Sophie Turner, Jack Gleeson and Alfie Allen.
Season two credits: The executive producers of GAME OF THRONES are David Benioff, D.B. Weiss, Carolyn Strauss, Frank Doelger; co-executive producers, George R.R. Martin, Vanessa Taylor, Alan Taylor, Guymon Casady, Vince Gerardis; produced by Bernadette Caulfield.

They'd actually end the season with RW? Man, what a cliff-hanger.

Where did D+D hint that the season would end with RW? I must have missed that.

Awesome news... Thank you for posting

This means that GRRM will have to have the next book written by some point in 2016 to shoot the 2017 season. This is possible given his current writing speed.

Can GRRM write the next 2 books in 5, maybe 5.5 years? (No)
Or will we have the TV version completed before the books?

I think it will be more:

It's going to be tight, and there's no way ADoS will be ready for the following year (or even two years after that). Assuming GoT goes the distance, we will almost certainly see the end on screen before on the page.