With the start of Season 2 of Game of Thrones HBO has updated their Viewer's Guide website with a whole host of new information. Most notable is a new map that shows a lot more of the eastern continent of Essos than previously seen, although not all of it (Asshai is still off the map, though Qarth and the edge of the Jade Sea are shown). 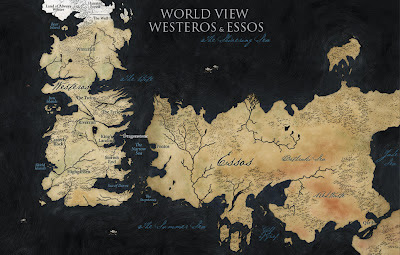 So is this map 'canon' for the books as well? Mostly, certainly as far east as the Red Waste and Lhazar. However, George R.R. Martin recently re-conceptualised the map of Essos past that region. The HBO map is based on older material and should not be considered canon for the books (although the approximate locations of Vaes Dothrak and Qarth should be correct, the coastlines and some of the geographic detail has changed).

Amusingly, since it doesn't show the known coast of Sothoryos, the map fails to resolve the age-old question of whether the Jade Sea is a landlocked semi-inland sea (like the Black Sea) or not. Speculation may continue, at least until The Lands of Ice and Fire map book (which will be canon for the books) is released in October.

Note that at the HBO website the map is zoomable on quite a large scale, and shows locations not visible on this map, such as Vaes Dothrak and Lhazar.
Posted by Adam Whitehead at 08:55

Email ThisBlogThis!Share to TwitterShare to FacebookShare to Pinterest
Labels: a game of thrones (TV series), a song of ice and fire, george r.r. martin, hbo, maps

How did you find out that GRRM had re-conceptualized the Far East of Essos? I'd be curious to hear if he's dropped any hints about the changes.

Going off the HBO map, the Jade Sea looks more like an eastward oriented Indian Ocean than the Black Sea, although it could be an issue of scale (i.e., we don't know how big Essos is compared to Eurasia).

I can't wait until we get the map book later this year. That will resolve some of the questions for good. I'm still betting on the Jade Sea being a mostly contained body, because of the "circular" trade mentioned.

Ran from Westeros has been helping check over the maps before they are published, and GRRM ran both the old and new versions of Far Eastern Essos past him.

It's unclear if the current map is 'locked' (i.e. this map is now the canon map for the TV series, regardless of GRRM's changes) or if it will change to match GRRM's new maps when they are unveiled later this year. Since the map now contains everywhere that will be visited in ASoIaF/GoT (contrary to fanwank, I very much doubt we are going to Asshai outside of possible Melisandre flashbacks), HBO might just leave it.

nord-west of Essos is very bad. origins of Rhoyne are to close to the see at north, and there are no mountains between them and the see, impossible

There are pretty large mountains where the Rhoyne and its tributaries flow out, the HBO map just makes them look like feeble hills instead. The big river in the Dothraki Sea does seem rather impossible, however.

I love what HBO has done on their site... the interactive Viewer's Guide is awesome, it's even helpful to me, and I've read the books a few times already. :)

I do think it's cool that Martin still wants to keep parts of the world hidden.

this is a way nicer map

Ser Mountain Goat's map is very nice indeed, but strictly non-canon. The map in this article is canon to the TV series and the LANDS OF ICE AND FIRE map book due out next week is canon for the novels.