Charles 'Chuck' Bartowski and his handlers, Sarah Walker and John Casey, have successfully defeated FULCRUM, a rogue intelligence agency. The Intersect, the combined intelligence database of the entire United States which has been downloaded into Chuck's brain, has been radically upgraded. Now Chuck has access to advanced weapons and kung fu skills, amongst other abilities. But Chuck's emotions are getting in the way of him being able to do his job. A new agent, Daniel Shaw, is assigned to the team to help train Chuck as a spy, but this has unexpected results. 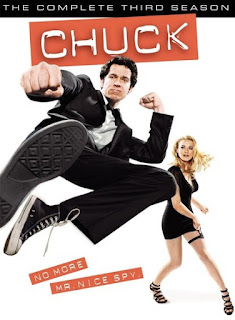 After the relentlessly entertaining second season of Chuck, the third season gets off to a surprisingly weak start. Rather than picking up immediately on Season 2's cliffhanger ending (where Chuck comes into possession of the Intersect 2.0), we rejoin the action six months later. This causes problems even with Chuck's elastic notions of plausibility (why are Sarah and Casey hanging around Burbank for six months when Chuck isn't there?) and necessitates a lot of backtracking and flashbacks to fill in the gap. Once we're past the hurdle of the first few episodes (and a somewhat dubious Vinnie Jones guest role), however, things improve a lot. The second season's format of stringing together several multi-episode arcs into one cohesive whole is repeated and is almost as successful as previously. Brandon Routh is decent in the new role of Shaw, with the writers not wasting any opportunity to highlight his previous major role as Superman (even draping him in the American flag in one amusing scene).

As usual, the season has a good mix of comedy and drama, with some great stand-alone stories (Armand Assante's turn as a somewhat demented, American-friendly version of Castro is especially entertaining) standing alongside the ongoing story arcs. Most satisfying is the unexpected way the show's set-up suddenly changes. Major characters discover Chuck's secret with little forewarning, altering the show's premise for the better by dropping the 'secret identity' storyline just as it was starting to get a little stale. Chuck and Sarah's relationship is moved onto another level, again just as the 'will they/won't they' angle was running out of steam. Even Casey is given a stronger personal storyline, as he discovers a family he never knew he had and becomes conflicted over contacting them or not. And, as usual, the more serious spy stuff is balanced out nicely by the lunacy going on over at the Buy More store.

Overall, the third season of Chuck (****) is funny, self-aware and entertaining. It's not quite as a good as the second season, due to a dodgy set-up in the first few episodes that results in a lot of backtracking and wheel-spinning and the fact that the new bad guys, the Ring, are identical to FULCRUM. Beyond that, the show evolves its premise and characters in compelling new directions and shows a willingness to change even fundamental parts of the premise when necessary. The season is available now in the UK (DVD) and USA (DVD, Blu-Ray).
Posted by Adam Whitehead at 18:26