Rome, 2760 AUC. Three years ago, the Emperor's younger brother was murdered as part of a scheme to seize control of the Roman Empire. His son, Marcus, went into hiding and survived thanks to the help of two slaves, Sulien and Una, who harbour secrets of their own. When the Emperor suffers a stroke, Marcus has to assume the regency. With tensions rising between Rome and her great eastern rival, Nionia, Marcus embarks on a daring peace mission. But there are those within Rome who still covet the Imperial throne, and will use Marcus's past against him. 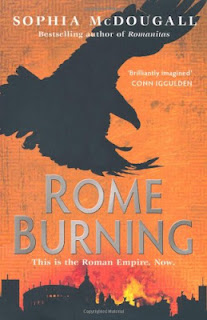 Rome Burning is the sequel to Sophia McDougall's debut novel, Romanitas, and the middle book of the Romanitas Trilogy (which concludes with Savage City). The premise of the trilogy is straightforward: the Roman Empire never fell and, by the present day, has gone on to conquer most of the world. However, the Empire is still built on the back of capital punishment, slavery and the occupation of other peoples. The principal characters in the books are Marcus, the imperial heir whose view of life is radically altered after spending time in the first book as a fugitive, and Sulien and Una, the freed slaves who now want Marcus to abolish the institution once and for all. Also, somewhat randomly, Una also happens to have mildly telepathic powers (which definitely seem to have been pared down in this second novel).

Romanitas was a flawed novel. It had a strong premise, but the premise was constantly under-explored throughout the novel. Coupled with somewhat poor characterisation and often stodgy prose, it was a hard book to get through, despite the 'on-the-run' storyline giving rise to some interesting tension. Rome Burning shows massive improvements in some areas but, unfortunately, some significant weaknesses in others.

On the plus side, McDougall's characters are (mostly) much-improved. Sulien, Una and Marcus are all better-defined, with Una in particular becoming a more interesting, complex protagonist and Sulien having a lot more to do this time around. Marcus's development from callow youth to statesman continues, with his former idealism now being tested by political practicality. His desire to end slavery is contrasted against the possible economic collapse of the Empire if he moves too quickly, and his attempts to find a balance (that come across to Sulien, Una and other former slaves as back-pedalling) are constantly misunderstood. There's a lot more meat to the main characters this time around. Unfortunately, our principal antagonist for most of the book, Drusus, is a cartoon villain at best, who is so utterly unsuited for the political skulduggery required that he should never really be a threat to the considerably more intelligent Marcus. The eventual defeat of Drusus's return to power is also chronically under-explained (basically Marcus gets annoyed and makes a speech to his uncle and suddenly everything's okay).

On the worldbuilding front, the alternate Imperial Rome is not particularly convincing, resembling as it does one of those computer game RPG cities which seem to consist of three streets and twenty people. There is no real sense of any life in the city beyond where the immediate action takes place, and it's a genuine surprise when other Roman senators or characters outside of the core cast show up. For the first half of the book, it's a claustrophobic-feeling story rather than the epic it is aiming towards. Things improve a lot when the action moves to Bianjing (where the isolated-from-the-outside-world feeling is much more appropriate) and the scope of the story widens.

The biggest problem is the writing. McDougall favours a very old-fashioned style with frequent POV shifts within the same paragraph, making following what's going on and who's thinking what unnecessarily difficult. Coupled to some fairly indifferent prose, this makes reading the novel rather hard work. In fact, the book is definitely leaning towards the turgid when the halfway-point shift to Bianjing takes place. At this point, fortunately, the book picks up a lot, the writing improves, the pacing turns up a notch (as Drusus's laughable political fumblings take a back-seat to a much more interesting plot about slavery and terrorism) and things become more enjoyable, ultimately culminating in a genuinely tantalising cliffhanger.

Rome Burning (***) is a book that very nearly collapses under the weight of its negatives until they get straightened up and it ultimately becomes a solid read. The presentation of the premise is still highly implausible, characters outside of the central trio can still be sketchy and the writing style can be frustrating, but the latter half of the novel shows an improvement in quality that ultimately makes the experience - just about - worthwhile. The novel is available now in the UK and USA.
Posted by Adam Whitehead at 16:04

I do recall your review of Romanitas, and even if this would be up my alley, I've shied away from reading the series.