Glen Cook gearing up for a new BLACK COMPANY novel

In an interview with SF Signal, Glen Cook has confirmed that he is planning to write two more Black Company novels. The first, Port of Shadows, will take place between the first two novels of the original trilogy. He has already done some work on this book (in the form of two short stories which will be expanded into the novel) and will make this his next project once some other existing commitments are met. 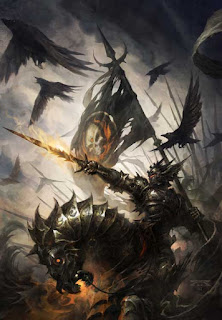 There will be another book, A Pitiless Rain, which will be set after all the other books in the series. He does not disclose a timeline for this book. He also confirms there will be another Garrett, P.I. novel in the future, with the working title Wicked Bronze Ambition.

Cook also expands on what happened to his Dread Empire series, including the loss of the original manuscript (not just for the eighth novel but part of the ninth as well) and how he approached bringing the series to a final conclusion in A Path to Coldness of Heart.
Posted by Adam Whitehead at 19:54

Interesting interview, sounds like a very informed back and forth between interviewee and interviewer. That helps sometimes.

We've known the titles for the two Black Company novels for several years now. The new bit to me is that the BC stories he's written lately are part of the new book (much like what he did for his first BC story, which was just a chapter from the first BC novel).

Good to know about the Garrett PI book, though! Looking forward to those even if I feel like they haven't been as good.

If you haven't read "The Dragon Never Sleeps," though, you need to read that ASAP.

Finally! "Tides Elba" left me cold, so I'm looking forward to Port of Shadows improving on it, either by making the story better, or putting it in better context. What a great interview all around.

Yeah, Bryan did a bang-up job on that interview. :)

Ha ha, yes, as an interview, it was one of the best I've seen with Glen.

Unlike, shall we say, Pat's interview from a couple years ago.

Any plans to read more Black Co. books in the near future Wert?

Yes, I have the next omnibus already. When I get around to it, I don't know.