This weekend I attended Eastercon 2012, the largest annual British science fiction and fantasy convention. This year it was held at a hotel adjoining Heathrow Airport. For the first time in its history, the convention was sold out in advance, likely due to the presence of George R.R. Martin (although having authors such as Joe Abercrombie, Adrian Tchaikovsky, Chris Wooding, Lisa Tuttle, Pat Cadigan and Cory Doctorow didn't hurt either). 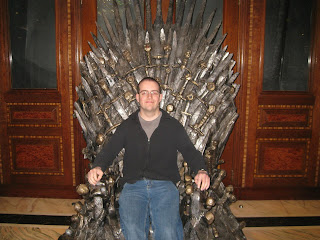 Time and budgetary constraints meant I could only attend for a few hours on Saturday and Sunday afternoons, though I did manage to catch the Game of Thrones TV panel, featuring actors Miltos Yerolemou (Syrio Forel) and John Bradley West (Samwell Tarly). Gethin Anthony (Renly Baratheon) and Natalia Tena (Osha) could also be found around the convention, though they didn't take part in the panels. This was followed by a Wild Cards panel where GRRM talked about the long-running shared world setting with John Jos. Miller, Pat Cadigan, Paul Cornell, David Anthony Durham, Gail Gerstner-Miller and his wife, Parris McBride (who played in the original RPG games that led to the creation of the setting).

The meat of the convention, as normal, happened at the bar and the late night parties. I met Adrian Tchaikovsky (author of the highly enjoyable Shadows of the Apt series) for the first time (he's halfway through writing the tenth and final book in the series) and caught up with a whole raft of other contacts. No massive exclusives, although Joe Abercrombie is heavily into the edits on A Red Country and confirmed that it looks like the UK edition will keep the 'A' in the title whilst the US edition will drop it (as seen on the already-revealed cover art). Gollancz also announced that they are bringing the Wild Cards series to the UK, with the original three books to be published before the end of the 2012 and then the 'new generation' books starting with Inside Straight to follow next year. A plan for the 'middle books' (including the long-missing iBook volumes) hasn't yet been decided upon, aside from the possibility of releasing them as ebook-only editions. Elsewhere, Chris Wooding confirmed he was just about to start working on the fourth Ketty Jay book as well. 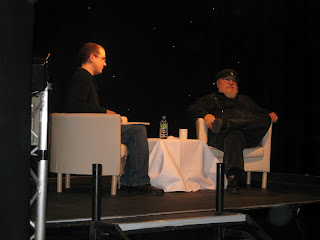 The Gemmell Award nominations were announced, to much frowning (there definitely seemed to be a consensus amongst many present - though not the award organisers to my knowledge - that the award could do with being moved to a juried format), and there was much discussion of the Hugo shortlist, not least the renewed GRRM vs Rowling contest caused by Game of Thrones Season 1 going up against the final Harry Potter move in the Long-form Dramatic Presentation category. Previously, The Goblet of Fire bested A Storm of Swords to the 2001 Best Novel Hugo Award, so it'll be interesting to see how it falls out this year. Otherwise the main topic of interest regarding the Hugos was that the novels on the list were books people had actually heard of, with particular positive surprise over the presence of Leviathan Wakes on the list.

My biggest moment at the convention was interviewing GRRM on the Sunday. We talked for about an hour about his career, from short stories through ASoIaF and the TV series, before he fielded questions from the floor. Some interesting stuff there. The interview was recorded and live-streamed, although it seems to have vanished from the Internet now. Once it resurfaces I will link it here.

Overall, it was an interesting - not to mention nerve-wracking - experience. But good fun for catching up with old friends and contacts and making some new ones.

I hope the Iron Throne chafed as it should. You look much to comfortable in that photo, Wert.

Nice interview, I was disappointed to hear that martin has still 2 short stories to finish and all his occupation with everything but aWoW.

A very nice interview, enjoyed it. Speaking of Game of Thrones panels. My friends and I enjoy Game of Thrones so much we made our own panel show just to be able to talk of thrones )))

Awww I didn't know you were at the con! It would have been lovely to meet you at last :)

I'm glad you had fun, I think it really was fantastic for everyone who attended this year.

Good to hear Adrian Tchaikovsky is racing towards the finish line with his series. I'm firmly in the Give The Authors the Time They Need-camp, but it's still nice to see some series finished at some point (Erikson is the other example).

You looked MASSIVELY nervous at the start there, but you soon eased into it, good job for just letting the man speak (I hate interviewers that interject too much).

Could you pleas summarise what (if anything) Martin had to say about the current status of TWOW?

He's done some work on it (in addition to the chapters left over from ADWD) but he's also finishing off two short stories (the new Dunk and Egg and another one, not sure what) and then had to break off to redesign his maps of Essos for the LANDS OF ICE AND FIRE collection.

He also says he's quite eager to get back to it, as it starts off with two kickass battles (that's from another Q&A elsewhere on the weekend). However, he also cautioned that he has some pretty intense and hardcore emotional scenes coming up, possibly along the lines of the Red Wedding.

I don't have a copy of the video. I've asked the Olympus people what the situation is.