With Game of Thrones resuming tonight (in the USA; tomorrow in the UK), it might be handy to have a brief catch-up on who's doing what to whom.

Obviously, MASSIVE SPOILERS if you have not yet watched Season 1. 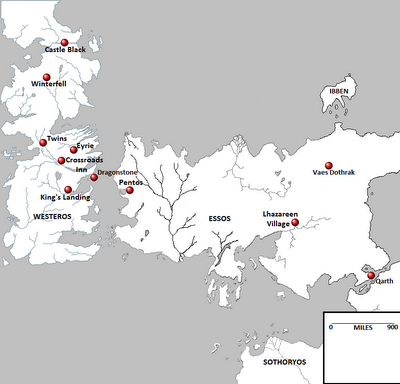 Major locations in Seasons 1 and 2.

The State of Play
The Seven Kingdoms of Westeros are wracked by civil war, a war that threatens to spiral out of control and eclipse even the bloody rebellion of Robert Baratheon against the Mad King Aerys Targaryen in casualties.

The arrest of Eddard Stark by the newly-raised boy-king Joffrey Baratheon has led Eddard's son, Robb, to declare war on Joffrey and his primary supporters, the Lannisters. The Stark armies have won a strategic victory at the Battle of the Whispering Wood, taking Jaime Lannister prisoner and breaking the siege of Riverrun, leading many of the River Lords to join Robb's cause. The main Lannister army, under the command of Lord Tywin Lannister, has retired to the formidably-defended castle of Harrenhal and launched a war of attrition, using mercenaries and skirmishes to raid the Riverlands without risking a large-scale field engagement. Robb's determination has been increased, however, with the execution of his father on Joffrey's order and his own elevation to the role of King in the North.

Meanwhile, before his death Eddard Stark managed to send a letter to the late King Robert's younger brother, Stannis, warning him that Robert's supposed children were actually bastards born of incest between Queen Cersei Lannister and her twin brother, Jaime. This had led Stannis to claim the Iron Throne for himself and begin mustering an army and fleet at his island stronghold of Dragonstone. However, whilst Stannis is a respected and feared battle commander and general, he is little-loved by the common people. Seeking to capitalise on this, Robert and Stannis's (considerably) younger brother Renly has also claimed the Iron Throne. He has won the support of the armies of House Baratheon and also the allegiance of House Tyrell, who command the largest army in the Seven Kingdoms (as big as any of the other two combined), and plans to press his claim by the sword.

Far across the sea, Daenerys Targaryen, last surviving child of the Mad King, has seen her brother Viserys and husband Drogo die, as well as her son perish in childbirth. Drogo's Dothraki khalasar of forty thousand warriors has split asunder, leaving Daenerys and only few dozen retainers and loyal warriors in her command. However, she also has a prize the entire world would kill to seize: the only three dragons to hatch in two centuries. Eventually they will be large enough to raze cities and burn armies alive, but for now they are small and vulnerable, and Daenerys must protect them until they grow to their full strength.

In the furthest reaches of the North, the Night's Watch has seen rangers disappear beyond the Wall. They have also seen the dead return to life to threaten the living. With rumours growing that the King-beyond-the-Wall, the wildling leader Mance Rayder, is gathering a large force in the mountains, Lord Commander Jeor Mormont has commanded that the Night's Watch mount a reconnaissance-in-force beyond the Wall. They will determine Rayder's intentions and also see if there is any truth to these rumours that the mythical White Walkers have returned.

Areas of control at the start of Season 2. Expect this map to change rapidly over the course of the season.

Players in the Game

The Stark-Tully alliance controls a vast swathe of territory, including the entirety of the Noth and most of the Riverlands. However, their numbers are limited due to the North's vast size and harsh climate. Reinforcements will take a long time to gather and come south. In addition, the Lannister host has encamped at the impregnable fortress of Harrenhal. The Starks and Tullys must seek an alternate strategy if they are to gain victory. The fate of Robb Stark's sisters (one missing, the other a prisoner in King's Landing) must also be considered in this situation.

Part of Robb Stark's strategy is to use his friendship with Theon Greyjoy to win the allegiance of the Greyjoys of the Iron Islands to his cause, which will give him the use of a massive naval force to use against the Lannister homelands. However, whether the ironborn can be won to Robb's side remains to be seen, especially given their enmity to the Starks following their failed rebellion a decade ago.

King Joffrey Baratheon holds the Iron Throne and the capital of Westeros at King's Landing. However, his own armed forces are minimal, with the bulk of his allies fighting the Starks in the North. The Lannister army has retreated to Harrenhal, giving them a firm base from which to mount sorties, but they lack the manpower to challenge the combined Stark-Tully host. Whilst Lord Tywin is pinned down, King's Landing remains vulnerable to attack from the south. Tywin has sent his son, Tyrion, to take King's Landing in hand and reign in the wilder excesses of Joffrey and his mother, the Queen Regent Cersei, but his ability to handle this task remains to be seen. Meanwhile, Jaime Lannister remains Robb Stark's prisoner, compromising the Lannisters' ability to use Sansa Stark as their own hostage.

Renly Baratheon has claimed the Iron Throne and won the allegiance of his own storm lords and the lords of the Reach (under House Tyrell) to his cause. He commands a vast strength at arms, as the Reach is the most fertile and populous region of the continent, and it's a long but relatively easy march from Highgarden to King's Landing up the Roseroad. Renly's formidable might could end this war decisively and quickly. The question then would be Renly's intentions towards Robb Stark.

Stannis Baratheon has claimed the Iron Throne from the formidable fortress of Dragonstone in the Narrow Sea and begun mustering men and ships. However, Stannis's lands are poor and under-populated. With the storm lords declaring for Renly rather than their rightful lord, Stannis, his prospects in the war appear bleak. Stannis is one of the most feared and respected generals in the Seven Kingdoms, so his chances cannot be discounted entirely.

Although Lady Lysa Arryn triggered the current crisis by accusing the Lannisters of murdering her husband, the late Jon Arryn, and conspiring against King Robert, she has refused to take sides in the war. Instead, the Knights of the Vale have been commanded to remain at home and protect her young son, Lord Robin, rather than siding with her sister, Lady Catelyn Stark, or father, Lord Hoster Tully. The Arryns must be counted out of the conflict for now.

The southern-most part of Westeros, Dorne, has practised a policy of isolation since the death of the Mad King and the murder of his daughter-in-law, Princess Elia Martell, by Lannister troops during the Sack of King's Landing. Dorne's military reputation is impressive and their numbers could bolster any claim to the Iron Throne, but for now they are sitting out the conflict. 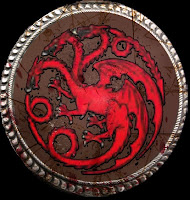 House Targaryen
Stronghold: none
Leader: Daenerys Targaryen, the Queen Across the Water

With the reported deaths of Viserys Targaryen and Khal Drogo of the Dothraki, little if any thought in Westeros has been given to the fate of Daenerys. However, Daenerys is alive with a small group of retainers and, more importantly, the only three living dragons in all the world. Daenerys's route is unclear, with hostile Dothraki khalasars lying to the west, the unhappy Lhazareen to the north and the avaricious cities of Slaver's Bay to the west. Daenerys's course may lead south and east across the forbidding Red Waste to the rich lands of the Jade Sea said to lie beyond. At this stage Daenerys is in no position to take any part in the wars wracking Westeros.

Email ThisBlogThis!Share to TwitterShare to FacebookShare to Pinterest
Labels: a game of thrones (TV series), a song of ice and fire, george r.r. martin, hbo, maps

There was a piece on Grantland that compared the Houses in season two to the EPL clubs. Pretty funny!
http://www.grantland.com/blog/the-triangle/post/_/id/22795/game-of-thrones-to-english-premier-league-converter