A Game of American Politicians

(and the original source) 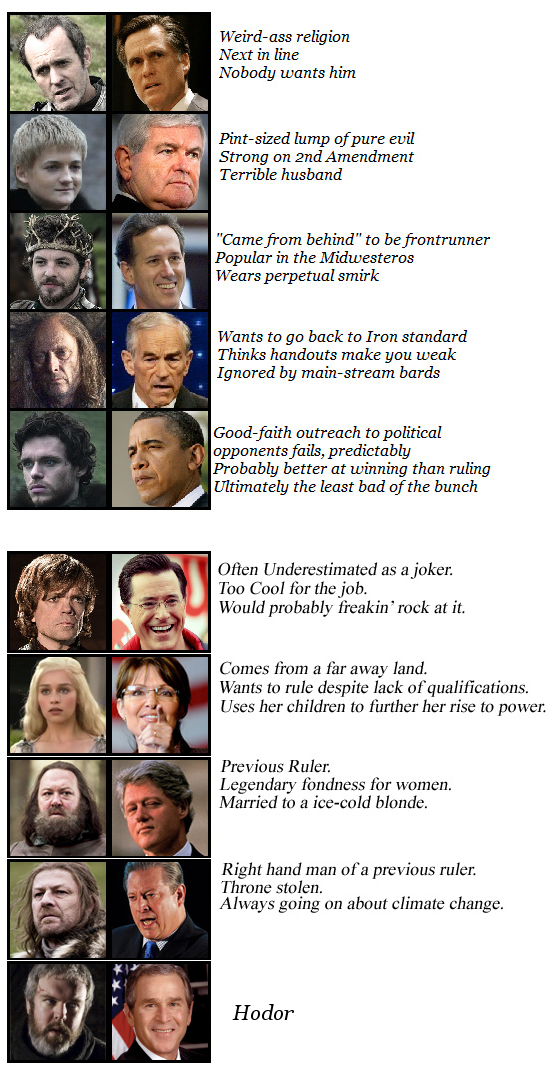 The idea of Sarah Palin as Daenerys gives me a chill down my spine.

Perhaps you should get a new spine.

Though you may have to wait a while with Obamacare

I'm in the UK and have no need of this 'Obamacare' of which you speak. On the NHS I could get a new spine in at least 6-8 weeks! I'd get one like Doctor Octopus's with all those cyberarms coming out of it, that would be cool.

Most of those are pretty close, except for the Palin one. I may not love Dany, but she's far better than Palin.

People like Anonymous have no clue except to spout what they've been brainwashed with. I've actually had to have surgery under a couple different socialist medicine states (Iceland, England) and one hardline one (China) and I thought the service was excellent.

I dunno, Dany's motives may have been good but she has killed a lot of people along the way and thrown the balance of power out of joint across most of the world. She's probably been more devastating to Martinworld than Palin would have been to the real one [/highly arguable].

How about giving credit where it's due. http://www.reddit.com/r/gameofthrones/comments/srwmz/the_war_of_five_kings/

Man, what did Danys and Renly do to piss Sam Sykes off? :P

Excellent, I couldn't find the original source. Thanks for letting me know.

Good ol' Hodor seems a little too generous, particularily in a pants department. I see Bush as more of a Theon Greyjoy character...

I could be wrong, but I always thought the whole point of Dany's storyline is that she's taking the time to learn how to rule justly, and maybe even provide a modernist alternative to the backwards monarchy with which Westeros has been saddled. I mean, I don't know if Dany's planning to single-handedly invent democracy or whatever, but it would fit, thematically. (She's going to have to find something to generate an heir, at least, since she can't have kids.)

Palin probably would have married Xaro, scored his ships, and then given up halfway through the invasion of Westeros for a lucrative job on the White Walker network.

Oh, and I love the subtext there with Renly being Santorum.