The furore over the ending to Mass Effect 3 is one of the biggest Internet controversies of the year, but BioWare and publishers Electronic Arts have moved to try to defuse the situation. In the summer they will be releasing an 'Extended Cut' DLC (downloadable content), for free, for all three formats of the game. The DLC will add additional cut scenes and an 'epilogue' which will clarify and explain elements of the hitherto bizarre ending that has so bewildered fans. 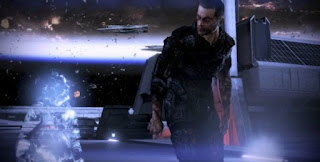 "Well, everything makes sense now!"
"Really?"
"No, but thanks for trying."

However, parsing the PRspeak of the announcement, it sounds that those hoping for a 'new' ending, or for the Indoctrination Theory to be proven correct, will be disappointed. It sounds like there will be no new gameplay elements at all, not even extra dialogue during the finale which will better explain just what the heck is going on. This may change as more news is revealed closer to launch, but this sounds like it will mitigate the damage rather than reverse it.

Still, a good move on BioWare's part, even if it doesn't go as far as some might wish.
Posted by Adam Whitehead at 14:49