Alan Wake is a successful novelist suffering from writer's block. He and his wife, Alice, take a holiday to Bright Falls, Washington, and rent a cabin on an island in the middle of a volcanic lake. When Alice 'surprises' Alan with a typewriter, hoping he'll feel inspired to start writing again, Alan becomes angry and storms out. He hears his wife screaming, only to find the cabin and the island have disappeared. Apparently the island was destroyed in a volcanic eruption in 1970. Wake discovers he has somehow lost a week, and keeps finding pages from a new novel he's been writing called Departure in which he himself is the protagonist. As shadowy creatures attack him and TV shows seem to reflect his state of mind, Wake must discover whether he has gone insane and attempt to track down his missing wife. 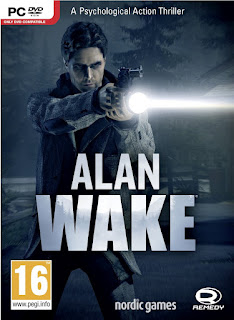 Alan Wake is the creation of Finnish developers Remedy, best-known for their superlative work on the first two Max Payne games. Like the Max Payne games, Alan Wake is strongly based around a central protagonist and emphasises his character development throughout the game, giving the player more of a connection to their character and his fate. Unlike Max Payne, Alan Wake is not purely an action game. It also employs elements of survival-horror, adventure games and exploration to create something that is hard to classify. This gives the game a unique mood and feel to it, but also makes it hard to market and resulted in initially disappointing sales (although, thanks to the highly successful PC version, the game has now sold more than 2 million copies and a sequel is likely).

The game is divided into six distinct episodes (with two more included with the PC version and available to optionally download for the X-Box 360) and structured like a TV mini-series. Each episode opens with Alan recapping the story so far and ends with a different song, usually on a cliffhanger. Each episode is usually divided into two sections, a daytime one where Alan investigates what's going on by talking to people and exploring the backstory, and a night section when Alan has to achieve some goal whilst under attack by the 'dark presence', a shadowy force which can animate objects and possess people using clouds of darkness.

The daytime sections are, disappointingly, free of choice. You can't choose Alan's dialogue and are on rails for most of these sections as people talk to you and explain what's going on (or not, in most cases). You can move around and sometimes find bonus items for use later, but there's a limit to your freedom in these sections. For those who become hooked by the game's intriguing, Twin Peaks-lite storyline, this will be fine. For those itching to get to the actual gameplay sections, these parts of the game may feel tedious (although they're usually pretty short, and we get to the action relatively quickly).

The bulk of each episode is the section set at night, during which time Alan has to fight off enemies. He can use a torch to burn away the dark presence from opponents and then destroy them with conventional firearms (oddly, the idea of finding some way of freeing people from the presence rather than killing them outright is never discussed, even when major characters are possessed). His torch can also be used to destroy possessed flocks of bird and animated everyday objects outright. Oddly, the torches in Bright Falls all have an 'intense light' mode that burns out the batteries, but will recharge if left alone (and the standard light setting doesn't use batteries at all, in contravention of the laws of physics). These mechanics result in a lot of scenes where Alan is running through the wood at night alone and having to intelligently combine his resources (lights, weapons, special weapons like flare guns which can take out entire groups of enemies) to fight off opponents. This could risk becoming repetitive, but new weapons, enemies and ideas are introduced steadily to vary things up so it never becomes boring. For example, Alan is joined by allies late in the game who fight alongside him and can provide light and weapons support from a search-and-rescue helicopter.

The game is reasonably well-written (a few clunking lines aside) and has some knowing nods at the genre, with Wake starting off by warning us that good stories don't always have fully comprehensible endings. This seems to be Remedy covering their backsides in advance, but in fact the storyline and ideas behind what's going on seem pretty straightforward. Their impact in the world is often weird, sure, but it all hangs together quite well. The characters are well-realised, ranging from Alan's agent and primary ally Barry (who is occasionally annoying, but also has some amusing ideas) to the ageing ex-rock stars whose farmhouse, studio and pyrotechnic equipment can be combined into one of the game's most impressive set pieces. Alan himself can be a bit whiny at times, but given what a bad couple of weeks he's having, this is understandable. More amusing is that Alan (and his more OTT fans) has an opinion of his popular crime fiction (that it's Serious Literature) which seems to be somewhat at odds with what we see of it (which is Average Cheese). The voice acting is overall very decent as well, with Alan's internal monologuing (which occasionally threatens to go all Max Payne on us, but just about holds off) summing up what's going on quite well.

The game is overall engrossing and enjoyable, with a good pace to events. It also has a great amount of content. After Max Payne 2's borderline-embarrassing 5 hour length, Alan Wake by itself clocks in at around 12 hours with another 3 hours on top for the optional extra episodes. It missteps a few times, however. Alan has a number of character animations which cannot be skipped, sometimes leading to unnecessary deaths where you're hammering the controls to fight off a horde of the possessed (or 'Taken' in the game's parlance) and all Alan is doing is ducking his head and waving his arms uselessly. The concluding section of the main game (Episode 6) and the second of the 'special' episodes also go on for way too long, with combat sequence after combat sequence that ultimately becomes tedious. The fact that the ending is sequel-baiting is to be expected (what isn't, these days?), but there is also a lack of closure to several other character arcs outside of Alan's experiences, which is disappointing. In addition, the optional episodes taking place entirely within the 'dark place', meaning that the laws of reality can be dropped altogether, may results in some excellent and inventive set pieces but this also results in the situation where you may find yourself not caring too much, if none of it is 'real' on the game's own terms.

Still, Alan Wake (****) is overall a very strong title. It's richly atmospheric, with excellent graphics and music. The story is interesting and, for a computer game, rather different and original. The combat is satisfying, if occasionally frustrating, and despite the weird and offbeat storyline most things are explained and make sense. The PC version features vastly superior graphics and control options and, as it also includes the two extra episodes for free, gets an extra half-star from me. The game is available now via Steam and in the UK (PC and X-Box 360) and USA (PC and X-Box 360).

I hate these kind of reviews that gets released so far ahead of the book. Usually ends up with me not buying just because i want to read it now and never remember it on release.

Have you even read the review? Alan Wake's a video game. Unless you meant your comment for another post.

Hey,Wert. Simon peg has reported that the villain is NOT Kahn. Pass it along, will ya!

Have to say, having played the xbox version for an hour or two, it bored the snot out of me. Everything was so proscribed and set to a certain plot it seemed like it'd been written by a frustrated novelist who wanted me to play out his story rather than read it.