The Hammer by K.J. Parker

Seventy years ago, a colony was founded on the western tip of an unexplored landmass. The colonists were supposed to mine silver, but didn't find any. Instead they farmed and lived in uneasy peace with the natives to the east. Later, the noble met'Oc family fled to the colony as exiles. Living on an impregnable plateau and raiding the colonists for livestock, they have not been the best of neighbours. Gignomai met'Oc, the youngest son of the family, rebels against his father and is disinherited, sparking a series of events that will define the future of the family and the colony. 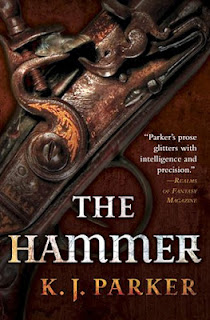 So, what do you call a novel which is not SF, which is set in an invented world but has no magical elements in it whatsoever, but where the spine of the book revolves around science and engineering? Science Fantasy? Fantasy Engineering? Of course, this is such a narrow field that you can simply call it a K.J. Parker novel and anyone who's read her* work before will know what you're talking about.

The Hammer is Parker's twelfth novel and is a stand-alone book, not part of any series, although it is set in the same world as just about all of her work. Those familiar with Parker will know what to expect: a cast of complex characters who fail to fall into neat categories of good and bad; a dry, black sense of humour; and an occasional tendency to turn the book into an engineering treatise for a few paragraphs.This latter trait is usually extremely important to the plot, which in this case turns on the different calibres of primitive bullets and the practicalities of setting up a factory, but can slow down the narrative at key moments if the author is not careful.

As usual, the book revolves around one character, in this case Gignomai, a bright lad who - understandably - does not want to spend his whole life living on a plateau farmstead with his distant father and somewhat ruthless brothers. Gignomai is a familiar Parker character: one man with a grand vision who is able to prevail over those of lesser vision through a mixture of ruthlessness, good team-management skills and thinking outside the box. In this case, however, Gignomai is also reliant on his friend Furio, whose essentially serves as his conscience, and Furio's father Marzo, whose unexpected diplomatic skills during a crisis end up with him being declared de facto mayor, to his own distress. These three characters form the core of the novel and drive forward the plot. They're all well-realised, but it's disappointing that a promising female character, the would-be doctor Teucer, almost vanishes from the novel after being set up as more of an important player.

The plot is somewhat complex and involved, relying as it does on mysteries, sleight of hand and the economic workings of the colony, although the small scale of the book means it's easy to keep everything straight. Parker has a deliciously twisted imagination and sense of plotting, and keeps the pages flying by as you try to work out what's going on. The novel is on the short side for an epic fantasy (if that's what it even is) at 400 pages, and Parker's prose style - deceptively straightforward writing masking more complex characterisation - is highly readable.

Overall, then, The Hammer is a fine novel that's fairly compelling and well-characterised. Where it falls down is that Parker's air of cynicism - present in most of her works to varying degrees - is a little too dominant here (instead of being more nicely balanced, as in the splendid Folding Knife) and some of her economic ideas are rather odd. The book initially presents the colony as being set on a poor landmass, with some valuable resources but nothing too special, explaining its small size. The later suggestion that it's on the edge of a mostly unexplored continent just a week's sailing from the Vesani Republic not so much beggars as breaks credulity. How has this land not been colonised on a much larger scale already?

Still, despite these lapses The Hammer (***½) remains an above-average novel from one our better and more interesting fantasy writers. It's certainly a lesser work from Parker, but one that's still worth checking out if you can overlook the minor faults. The novel is available now in the UK and USA.

* No, I don't know if Parker is a man or a woman, but I'm going with the majority view that she's a she in the absence of any other information.
Posted by Adam Whitehead at 17:07

So, what do you call a novel which is not SF, which is set in an invented world but has no magical elements in it whatsoever, but where the spine of the book revolves around science and engineering? Science Fantasy? Fantasy Engineering?

I'd probably just call it "speculative fiction" or "fantasy", since fantasy doesn't necessarily have to have magic in it (although most do). You could also call it "secondary world fiction", but that's more of a mouthful.

About the book - does it have a whole ton of actively unpleasant female characters, like The Folding Knife?

No. Like I said it really only has one female character of note and after a strong few scenes she just kind of fades away, which is a bit odd.