Or rather, details of a book we heard about more than four years ago but had since dropped off the radar. After completing Red Seas Under Red Skies back in 2007, it was announced that Scott Lynch would be writing two short stories set in the same world, The Mad Baron's Mechanical Attic and The Choir of Knives. These would be assembled into an omnibus edition, The Bastards and the Knives, for publication at a later date. 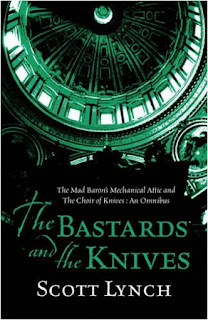 We haven't heard much about the book since, and it was assumed it would be delayed until some time after The Republic of Thieves (the third novel in the sequence) was published. According to Upcoming4.me, Gollancz have now indicated that the book will be published on 1 March 2013, with a length of approximately 100,000 words. Whilst rough cover art is provided, it's unlikely to be the final artwork as the image is a placeholder that has been used for several Lynch books in the past, and given that the art style has changed radically for the final version of The Republic of Thieves it's likely this will change as well.

As for The Republic of Thieves itself, it is still listed for a very late 2012 release but this date is - still - not finalised yet.

Note the source for the above appears to be Amazon.com, whose reliability is dubious.

Update: The release date of March 2013 is incorrect. It will follow some time after The Republic of Thieves has been published (whenever that is).
Posted by Adam Whitehead at 12:37

Email ThisBlogThis!Share to TwitterShare to FacebookShare to Pinterest
Labels: news, rumours, scott lynch, the bastards and the knives, the gentleman bastard, the republic of thieves

The date for the omnibus is absolute, unequivocal nonsense. Thank you for not taking whoever "update4me" is at face value on this one, Adam.

Not a problem Scott.

I seem to have accidentally deleted another comment that was posted here (about the source being Amazon UK and not Amazon US). Sorry to the poster about that.

I think you are being a bit harsh on the original source even though the info was taken from Amazon.

Which begs the question, who sets the date on Amazons? Do they pull it out of the hat or is it something that the publisher provides?

Amazon asks publishers for dates and uses what is given to them. If the publishers refuse to give them a date, Amazon will pull a date out of their backside.

Why exactly Amazon can't have a 'tbc' category for their book dates, like they do for DVDs, music and computer games, is something that has never been explained.

Ah that explains it, thanks a lot!
Simply unbelievable - i didn't have a clue.

Adam (re: Amazon dates),do you know that for a fact, or is it a theory?

I certainly find it believable, but if so, it begs the question: why do they do that for books and not video games, DVDs etc....

Back in April Scott Lynch did a reading from The Mad Baron’s Mechanical Attic at the KGB Bar in New York.

Here is a link to the Fantasy Faction site about said event and film of Scott in action.

No, that's a fact. Bantam and Voyager refused to give Amazon any release dates for A DANCE WITH DRAGONS for most of the time the book was in gestation, so Amazon made up their own ones. This drove the author and the publishers up the wall as they got complaining emails from fans accusing them of missed dates when they hadn't actually given out any hard dates at all and it was all down to Amazon making stuff up.

I don't mean to be unduly harsh to whoever runs "update4me," but there were other simple check-ups that could have been made... an e-mail to me, or to my publisher, or a simple glance at the Gollancz blog and websites.

The Bastards & Knives omnibus basically shouldn't even BE in Amazon's database yet, but there was an initial mistake long ago that is difficult and tedious to explain. Suffice to say: The cat got out of the bag years in advance. The cat cannot go back into the bag. Amazon keeps giving seemingly random/guesstimated release dates to said cat.

Thanks Adam - very bad mojo from Amazon, and actually damaging to people and their reputations.

Scott, many thanks for contributing, and I hope it's visible that, in the midst of the wailing, gnashing and keyboard pounding, there are those of us who put you first and the books second - much as we love them.

Also, one other point that may be worth mentioning is that I *believe* that Sub Press may have a period of exclusivity on the book before it's published through the normal channels?

If that's true, and taking into account that they put their titles up for pre-order way in advance of publication (and are smart enough to not give an exact date for that)the 2013 date becomes even more unrealistic.

Hello, people from Upcoming4.me here to tone things down and hopefully explain.

First of all, Scott and everyone, we are deeply sorry and we hope we haven't cause any lasting harm.

To explain, we were not aware beforehand about the personal issues of Scott Lynch because we follow the books themselves and not the personal lives of the authors, so when we found that same information about the books is published on multiple websites such as Amazon, Waterstones, WHsmith, stating the release date, number of pages and even number of words, we were very happy thinking that the new book is coming out and thought the information to be correct and received from published. We weren't aware that the information is old.

Sadly, we were wrong.

I hope you understand that it was never our intention to cause harm or to misinform anyone, especially not an author whose work we love and respect.

We did bare fact checking but all the data we found searching pointed to one direction. Reported delays (ie on Gollancz blog that Scott mentioned) were concerned only with Republic of Thieves delays and not this book in particular (of we didn't find them) and, as i said, since we don't follow private lives of the authors we weren't aware something was amiss and therefore we are deeply sorry.

Unfortunately we don't and can't check every information we find on the internet directly from the authors and publishers since they usually don't divulge that kind of information to us, especially about future releases, and we are limited with time. We do this for free in spare time out of love for books and reading. I know that is not an excuse but i'm just stating it as it is and that in special circumstances like this mistakes are definitely possible.

Once again, we apologize for reporting wrong information.

There was no intention whatsoever in doing so and it took us minutes to rectify it after Wertzone reported it was incorrect.

We are deeply sorry!