UK cover art and and blurb for A MEMORY OF LIGHT

Orbit Books have revealed the UK cover art for the final Wheel of Time book, as well as their cover blurb. The cover art fits in with the minimalist style of the last few British hardcovers, but is more striking due to the white colour scheme. 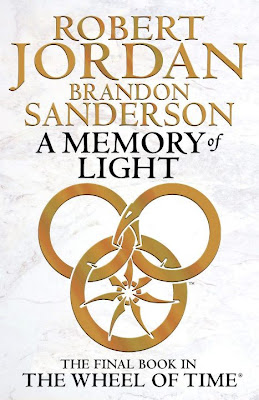 ‘And it came to pass in those days, as it had come before and would come again, that the Dark lay heavy on the land and weighed down the hearts of men, and the green things failed, and hope died.’ From Charal Drianaan te Calamon, The Cycle of the Dragon.

In the Field of Merrilor the rulers of the nations gather to join behind Rand al’Thor, or to stop him from his plan to break the seals on the Dark One’s prison – which may be a sign of his madness, or the last hope of humankind. Egwene, the Amyrlin Seat, leans toward the former.

In Andor, the Trollocs seize Caemlyn.

All humanity is in peril – and the outcome will be decided in Shayol Ghul itself. The Wheel is turning, and the Age is coming to its end. The Last Battle will determine the fate of the world..

For twenty years The Wheel of Time has enthralled more than forty million readers in over thirty-two languages. A MEMORY OF LIGHT brings this majestic fantasy creation to its richly satisfying conclusion.

Working from notes and partials left by Robert Jordan when he died in 2007, and consulting with Jordan’s widow, who edited all of Jordan’s books, established fantasy writer Brandon Sanderson has recreated the vision Jordan left behind.

A MEMORY OF LIGHT will be published on 8 January 2013.

Would have thought this would have been a better title to publish before Christmas ( as I recall most of the other titles were) to capture any gift buyers out there... here's hoping sanderson is able to tie up all the loose ends satisfactorily -no mean feat if he does.

@Anonymous - You don't know his wife.

Another step closer to the release of this! Does anyone else feel like this kind of represents the end of an era in fantasy? The Wheel of Time cycle has been going on for pretty much as long as I've been reading in the genre. Thanks for the headsup on this!