Release date for STAR TREK: THE NEXT GENERATION Blu-Ray set

As mentioned earlier this year, Paramount have been undertaking a substantial amount of work to bring Star Trek: The Next Generation to the Blu-Ray format. They have now confirmed that Season 1 will be released on 24 July in both the UK and USA. 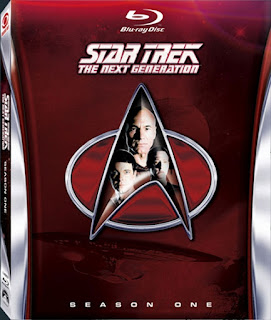 This is more than just a transfer of the existing DVD release. In order to generate a true HD image, a team of editors and technicians had to go back to the original film (fortunately stored under a salt mine in Virginia) and re-master the entire series. This necessitated each episode being re-edited from scratch to match the original versions of the episodes from twenty-five years ago, only at a superior visual quality.

This substantial amount of work is the reason for the Blu-Ray set's price: £52 in the UK (Amazon price; street price will likely be higher) is quite a lot for a Blu-Ray boxed set of an old series. However, the impressive amount of work put into the project so far goes some way to making up for the higher cost. The American cost has not yet been revealed.

The rest of the series will follow at a later date. If the project is successful, I imagine the other Star Trek series will eventually follow suit.
Posted by Adam Whitehead at 20:11

Email ThisBlogThis!Share to TwitterShare to FacebookShare to Pinterest
Labels: news, star trek: the next generation