The railsea: a network of metal rails and wooden slats which extends in all directions, covering the hostile, animal-filled earth which is too dangerous to walk on. Great islands and continents of rock rise between the rails, on which cities, towns and people exist. Sailing the railsea are thousands of trains, ranging from the primitive wooden, animal-pulled trains of tribal plainsfolk to the sleek, metallic dreadnoughts of powerful navies. Inbetween lie the independent trains, such as the Medes, a moler which strikes deep into southern climes in search of an ivory-coloured moldywarpe, the nemesis of the captain and the subject of her obsession. But when the Medes instead finds a wrecked train holding a tantalising secret, the destiny of the railsea, and of a young man named Sham Yes ap Soorap, will be forever changed. 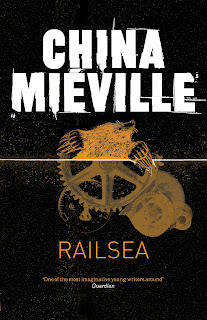 Railsea is Moby Dick rewritten to feature a crazy woman steering a train across an ocean of rails in search of a giant burrowing mole. Except when it's not, which is most of the time. It's also A Wizard of Earthsea but with trains rather than boats, except not really. It's a homage to trains and to boats and pirate movies. It's a book about language where people's lives are given meaning by pursuing giant monsters, which they call their philosophies and embody ideas and archetypes within them. It's a Young Adult novel but with so much baroque language and complex use of metaphors that no-one should consider the term a pejorative. One thing is clear: it's a China Mieville novel.

Railsea is Mieville's ninth book and, judged purely superficially, is a romp. It's an adventure about a young man (Sham Yes ap Soorap) who goes to (rail)sea, gets caught up in his captain's obsession and uncovers a secret that will lead him to the ends of the earth and beyond, in search of the meaning of it all. Along the way he fights, is captured by and eventually escapes from pirates, takes part in the hunting of a gigantic mole (going by Mieville's illustrations, we're talking a mole bigger than a blue whale), tames a hostile bat and gawps at vast, cosmopolitan cities. It's a vigorous page-turner, compulsively readable and endlessly inventive. 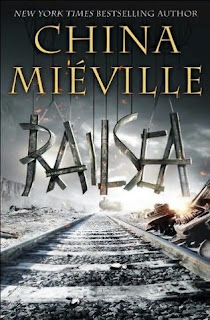 Stepping back, the book is more complex. In a possible metatextual nod at the cliches of such fiction, many captains of trains have missing arms and legs, snatched away by one kind of beast or another. Captains even carry lists of what animals their fellows are hunting, so they may pass on news of any sightings. Each animal represents an ideal and a philosophy, so the ships of the railsea aren't just molers and merchants, but devices searching for meaning and answers. For Nephi, captain of the Medes, her nemesis represents something very simple indeed: everything. And to find that truth, she would take her ship and her crew anywhere the trail leads. For his part, Sham is likewise obsessed, with an impossible image glimpsed briefly, an image that could shake the world, and it is how these two obsessions cross paths and align that gives the book its narrative spine.

The world of Railsea is vivid and initially bewildering, with Mieville's inventive but remorselessly logical mind working overdrive to give us his most fully-fleshed out creation since Bas-Lag itself. It's a world with two skies and myriad levels of land, a place that is a secondary fantasy world like Bas-Lag but also an alien planet such as those seen in Embassytown. It also might be something else. No direct answers are given, but the questions are more interesting for that (and the ending is powerful, opening more possibilities as it closes down others). It's a world of monsters, however, and Mieville gives us some of his best, from the great southern moldywarpes to the naked molerats to the friendly (if treated right) daybats. Occasional illustrations show these creatures in all their (sometimes revolting) glory.

Mieville populates the book with his normal gallery of well-defined characters, from the archetypal young hero Sham to the coldly authoritative Captain Nephi to the vision-seeking siblings Shroake. What unites the characters is their need for answers and their desire to search rather than to accept what is and what has been for centuries.

Railsea (*****) is a well-written, compulsive page-turner and sees Mieville's imagination on top form. It's a book that works on multiple levels and is thoroughly rewarding. His finest work since The City and The City and maybe his finest since The Scar. The novel will be published on 15 May in the USA and on 24 May in the UK.

I agree by and large with the review here and for 3/4 of the book I felt that China Mieville has written something close to rivaling The Scar - which imho is his best novel and one of the top-top sff novels ever - but I had two niggles.

The last part of the book turned a little bit too YA, especially in that side-plot of the siblings, while plot-wise the novel ended again in very familiar waters like Embassytown and alien civilization disruption and re-balancing, this time in something like say Eternity Road which came to mind more and more the closer I was getting towards the end of Railsea.

This being said execution definitely counts for a lot and Railsea is superb, but there is that tiny feeling that Mr. Mieville can do even better and open new vistas in sf the way he did in fantasy with PSS and The Scar...

A small niggle here - not loving the new cover art for all the Mieville UK editions - I thought the original Edward Miller art on Perdido and The Scar was far superior. The new cover art since Kraken ( although unifying all the jacket designs) is not as strong.

damn do I want to read this.

ramblings of the cold north said...

Great review! Counting down days for when I can order this one =)

@Thomas - Edward Miller has produced cover paintings for all of China Mieville's books... in their Czech editions. I just saw his covers for The City & the City, Un Lun Dun, Embassytown and Kraken and they are all outstanding.