CD Projekt, the critically-acclaimed creators of The Witcher computer game franchise, have announced that they are working on a game based on Cyberpunk, the well-regarded 1980s pen-and-paper RPG (which is still going strong today). Their approach to the game sounds similar to that of The Witcher, with emphasis on making a 'mature game' for adult gamers with strong RPG mechanics. 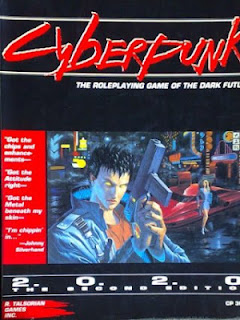 The current version of Cyberpunk is set in the 2020s and depicts the world as a dystopia, with implants and computer technology being used for nefarious purposes by corporations and criminal gangs alike. The RPG is was heavily inspired by the 1980s works of William Gibson and Bruce Sterling. It was created by veteran RPG designer Mike Pondsmith with its first edition released in 1988. I've played in a few Cyberpunk games and found it to be a decent system.

The Cyberpunk game does not have an expected release date yet, but I'll be surprised if it's before next year at the earliest. Apparently CD Projekt, fuelled by both the success of The Witcher 2 and their GoG download service, are proceeding with this title and The Witcher 3 simultaneously, along with two smaller-scaled titles.
Posted by Adam Whitehead at 18:00

Was hoping they were going to adapt one of Dukajs' books (Black Oceans would fit nicely), but I guess the world is not ready for such awesomeness yet. Still, it's CDPR, so even without knowing anything about the game, this is now my most anticipated title. Would be nice if we got more than a single piece of concept art, though.

Cool, but would have been cooler still if it were based on the Shadowrun pen and paper game. Then you'd get cyberpunk dystopia PLUS orcs, trolls, elves, mages, etc. I know there's been one recently, but there hasn't been a decent Shadowrun video game since the mid 90s, for SNES and Sega Genesis.

A new SHADOWRUN game, SHADOWRUN RETURNS, is currently being developed by the creator of the pen-and-paper game. It's a 2D Kickstarter project, somewhat old-school, but it sounds quite promising so far:

Wow, thanks for the info. Even though I haven't played Shadowrun in any form for years and years, something about that "world" has always stuck with me. Plus, it's mainly what got me into fantasy and cyberpunk in the early 90s. I even have all my old Shadowrun novels, mostly crap, but Michael A. Stackpole's 'Wolf and Raven' stories from the late 80's are pretty bad@$$, imo.