In the realm of Asgard dwell a race of aliens who inspired the Norse myths. A millennia ago, they fought a war against the frost giants, defeating them and forging an uneasy peace. When a frost giant raiding party attacks Asgard, Odin dismisses it as a one-off incident whilst his son Thor demands a warrior's response. When he disobeys his father's command and launches a counter-raid on the frost giant homeworld, Thor is stripped of his powers and exiled to Earth, leaving his brother Loki free to rise to power in Asgard... 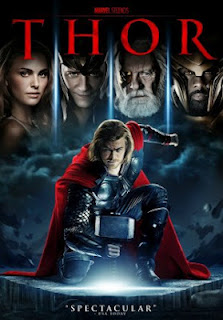 Of the Marvel superheroes headed for the big screen, Thor was always going to be the hardest sell. Whilst the other Marvel heroes are (mostly) humans who have gained their power through science, technology or mutations, Thor is an alien from another world who dresses up like a Lord of the Rings character, intones rather than speaks and whose answer to everything is overwhelming violence. Marvel made an excellent choice in bringing in Kenneth Branagh to direct the movie. A Shakespeare actor and director of long standing, Branagh embraces the movie's crazy concepts and over-the-top theatrics with all the relish of a director jumping head-first into A Midsummer Night's Dream and brings real flair to many of the scenes. Most notably, he does not balk with either the action sequences or the CGI-heavy scenes and pulls these off well.

The movie's depiction of Asgard is a notable part of its success, with the realm depicted as a colourful and weird world of retrofuturistic buildings, rainbow bridges and people who have never heard the word 'camp' walking about in gleaming golden armour. The casting of its residents helps a lot with this, with Sir Anthony Hopkins bringing requisite gravitas to the role of Odin and Chris Hemsworth making for a likable Thor. Tom Hiddleston is excellent in the role of Loki, bringing charisma to what could have been a one-note villain. Idris Elba also does great work in the very small (but crucial) role of Heimdall. As well as having the most ludicrous costume in the film (this is saying a lot) and some of the most portentous dialogue, he is also saddled with dubious contact lenses, but is never less than 100% convincing in the role. Thor's band of adventuring companions is well-played (and it's always great to see Ray 'THIRTEEN!' Stevenson on screen) but under-used. Similarly under-utilised is Colm Feore as the king of the frost giants, who is appropriately menacing but barely appears.

For the Earth characters, Natalie Portman is also solid as Jane Foster, but her character lacks real development in the film. In fact, she degrades from an intelligent physicist into a two-dimensional love interest over its length, which is disappointing. Outside of a few decent one-liners, Kat Dennings also gets little to do as Darcy Lewis, to the point where she seems to have no point in the movie. Stellan Skarsgard is better-served as Eric Selvig (rather better than Portman, as he carries over to The Avengers) who gets a few good scenes, most notably when he and Thor get drunk in a bar. Most surprising is Jeremy Renner, who unexpectedly shows up for five minutes as an archer and then vanishes, which will likely confuse casual audiences but delight hardcore Marvel fans (as will Clark Gregg, returning from the Iron Man movies as Agent Phil Coulson).

The film ticks along nicely with some good pacing, and the script does a good job of mixing up the Marvel universe and Norse mythology whilst trying to anchor the Earth scenes in some kind of reality. Considering the potential for the movie degenerating into a confused mess, it's impressive it turned out as cohesive as it has. Unfortunately, there are some issues. Thor losing his powers so he is actually in danger on Earth is a lazy plot device, whilst the Destroyer is not a particularly engaging enemy. There's also a dearth of good female roles, with Portman's role being predictable and Dennings's being pointless. Jaimie Alexander is better-served as Sif, but is still relegated to the supporting cast. The script also arguably does not adequately explain why Thor offers to ally with SHIELD, given that SHIELD's portrayal for most of the movie is not particularly flattering.

Still, Thor (***½) is enjoyable in a gloriously over-the-top, bonkers way. Some underserved actors and dubious plot points notwithstanding, it's a reasonable slice of entertainment. The movie is available now in the UK (DVD, Blu-Ray) and USA (DVD, Blu-Ray).
Posted by Adam Whitehead at 12:25