A powerful device called the Tesseract has been studied by the American intelligence organisation SHIELD for the past few decades, who believe it can be used to unlock the secret of creating infinitely renewable energy sources. Loki, a powerful entity from the world of Asgard, steals the cube and plans to use it to open a dimensional portal to allow an alien race to invade the planet. SHIELD calls in its top agents (including Clint 'Hawkeye' Barton and Natasha 'Black Widow' Romanoff) and most powerful allies to answer the threat. Leading the fight are the recently-revived Steve Rogers (Captain America), the billionaire industrialist Tony Stark (Iron Man) and the mild-mannered Bruce Banner (the Hulk). The Asgardians, aware of the extent of Loki's threat, also dispatch Thor to aid in his containment. The result is mayhem as the two sides clash in the streets of New York City, with the fate of the Earth (and potentially many other worlds) at stake. 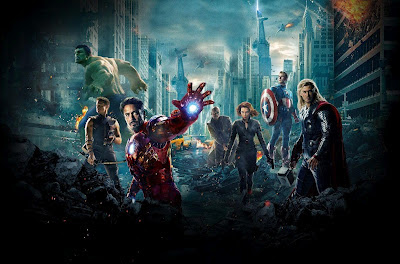 The Avengers is the culmination of Marvel's five-year cinematic masterplan. Scenes establishing SHIELD and the Avengers Initiative were seeded into its earlier movies - The Incredible Hulk, Captain America and Thor, as well as the two Iron Man movies - in preparation for this film, where all the different superheroes get together to fight a massive threat. Aware it would take one heck of a director to keep all the actors, egos and storylines from spiralling out of control, Marvel called in Joss Whedon. Whedon may not have been the most bankable choice - his previous movie, Serenity, barely broke even and he's had several failed TV projects in succession - but he was by far the most logical one. With critically-acclaimed runs on several Marvel comics and dialogue work on the original X-Men movie under his belt, not to mention form with handling large, disparate casts, Whedon proved a good choice.

With only two hours to play with and a dozen notable characters to do justice to, Whedon gets to the point straight away. The action-packed opening few minutes establish the premise (Tom Hiddleston returning as Loki and making even more of an impact than in Thor, though he does get a little lost in the mix later on) and we immediately get to the 'getting the team together' sequence. Mark Ruffalo has the hardest task here, as he has to step into the well-worn shoes of the Hulk (replacing Edward Norton who in turn had replaced Eric Bana) and sell a difficult character to the audience. He immediately succeeds, bringing a combination of cynicism, brilliance and humanity to the role of Banner, which is the stand-out performance of the film. The rest of the team is assembled pretty quickly, apart from Thor who is unreachable (thanks to the events of his own film). Needless to say, he gets over that complication fairly quickly (and possibly way too easily) to join in with the mayhem. Unfortunately, he seems to have lost a little of the fun and wit that he displayed in his own movie, but given his personal stake in the action (Loki being his brother) that's unsurprising. Whedon employs his ability to get lots of different characters into a room and spark off one another to the full, with Robert Downey Jnr's Tony Stark running off with many of the best lines. Chris Evans's Captain America is a little passive in the early stages, but his clear-headedness and ability to take command of the situation eventually wins through and earns him the respect of the rest of the team.

More impressive is that Whedon doesn't neglect the large battery of secondary characters. In particular, he promotes Scarlett Johansson's Black Widow and Jeremy Renner's Hawkeye to equal billing as the 'big four', giving them plenty to do. Johansson walks off with the best scene in the movie (a great confrontation between her and Loki which twists and turns through various tones and different head-games) and is much better-served than many of the female roles in the other Marvel movies (Gwyneth Paltrow also gets some excellent lines in her brief appearance as Pepper). Samuel L. Jackson gets more to do as Nick Fury rather than just handing out mission briefings, whilst Clark Gregg's Agent Coulson also gets an amusing subplot where he turns out to be a Captain America fanboy.

However, what makes The Avengers really work is that it's a comic book movie which remembers that it's a comic book movie, featuring guys in ridiculous costumers unleashing ludicrous amounts of violence against CGI monsters, and having fun with that idea. There are genuine comic book moments of awesome throughout the picture, most notably the revelation of the SHIELD Helicarrier. It may be ridiculously impractical as a mode of transport (as rapidly proven in the film) but it's an impressive design. Most of the action sequences are impressive, and Whedon does his best to keep the CGI under control and investing us in the characters and their actions. This falters during the concluding action sequence in New York City, which occasionally teeters on the edge of a Michael Bay-shaped abyss of confusing explosions, but Whedon just about manages to stop it slipping into total anarchy. The characters get moments to show off their heroism and Whedon's typical humour grounds things nicely (a moment between Thor and Hulk during the final battle getting the movie's biggest laugh).

The biggest casualty of the film is that the bad guys suffer a little. Their motives for invading Earth are never really explained and it's unclear how exactly Loki was able to win them over (though the post-credits sequence does give a clue). Using the Cosmic Cube/Tesseract as the movie's maguffin is a good idea (since it's been well-established in several previous pictures) although we still don't get any explanation of its origin or purpose.

On almost every other level, Whedon has pulled it off. The film has massive action set pieces but also moments of humour, characterisation and humanity. It does a good job handling the major heroes but it doesn't neglect the side-players. The effects are impressive but don't overwhelm the picture (though coming close on occasion). Most notably, he manages to combine these crazy characters and their different realities and tones into one story successfully.

The Avengers (****½) is a ridiculously entertaining and fun movie. It's in the cinemas right now.
Posted by Adam Whitehead at 14:13

Really? Everyone I've spoken to puts that second, behind the Hulk/Loki "puny god" scene.

Pretty amazing that one guy can get credit for two amazing movies in one year. Fanboys will probobly debate that Cabin in the Woods is a better picture and I would agree but equally awesome is the geeky love that he no doubt put into making the Avengers. Hopefully we get a steady diet of Joss Whedon on both large and small screens from here on out.

Pretty much exactly what I thought but I only gave it 4/5. I felt the alien invasion part was not explained enough (motivations, background) and rather weak when it did come through (not enough troops and only two "types" of enemy).

I've seen it twice now and can heartily recommend NOT seeing it in 3D. 2D was fun and exhilarating, 3D added absolutely nothing to the film and detracted quite a bit during the end battle.

Also, there is a post credits addition that apparently only the US gets (the Avangers eating shwarma) whereas international only got the post main cast list extra. Eh, whatevs.

It's a fun film and Banner is easily the best acted whilst Hulk is the extremely funny comic reliefe (his scene with Loki at the end is brilliant, as is the aforementioned Thor scene).

Hey there, absolutely loved it. I personally however would recommend to see it in 3D - I am not a big fan of 3D at all, but in this movie, the 3D action was cool. Although it didn't hurt that story, characters and dialogues are the big advantages of this movie ,)