The birth of Titus Groan, heir to the vast castle of Gormenghast, is a time of great joy and happiness for the inhabitants. However, it also marks the beginnings of the rise to power of Steerpike, an ambitious boy from the kitchens who uses his ruthless schemes to secure a position of power and influence. As Titus grows to manhood, increasingly doubtful of his place in a castle steeped in tradition and ritual, so Steerpike's ambition, power and greed grows as well. 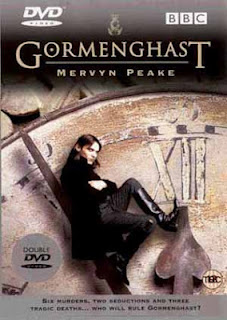 Mervyn Peake's Gormenghast Trilogy is one of the defining and most important works of the modern fantasy genre, a densely-written work of tremendous atmosphere and power. On a surface read it is also quite unfilmable, with much of the action in the book motivated by conflicts that are internalised within the characters and much of the storyline and characters being too offbeat, weird or surreal to be commercially viable.

This is probably why only the BBC - a public-service broadcaster which cares little about commercial success but has access to large budgets - could have even attempted a faithful adaptation of the series to television. This four-episode mini-series covers the first two books of the series, Titus Groan and Gormenghast. The third book, Titus Alone, was not attempted due to its significant budgetary requirements, time constraints and it being far too strange even by the standards of the rest of the trilogy.

To bring the books to the screen, the BBC spent a considerable amount of money. Filmed in 1999 and broadcast the following year, the serial has certainly dated (particularly the sections where greenscreen was obviously used) in respect to its composite work, but otherwise has held up well in terms of production values. The sets are highly impressive (especially when the castle is flooded during a downpour) and the costumes are superb. The effects work (by itself) is decent, although the matte paintings and CGI versions of the castle proved controversial amongst fans of the books. The BBC version of Gormenghast is arguably much more colourful than Peake's grey, crumbling ruin, with the TV version taking more overt inspiration from China's Forbidden City (Peake spent most of his first eleven years in China, where his parents were missionaries).

The casting is mostly excellent, with what feels like every British actor and comic of note at the time recruited for the project. Ian Richardson plays the increasingly befuddled Earl of Gormenghast, whilst Celia Imrie - better known for her comic roles - plays his wife, the cold, austere and commanding Lady Gertrude with a steely presence. The series features a very early appearance by Jonathan Rhys Meyers (Henry VIII in The Tudors) as Steerpike in a performance which veers between the convincingly conniving and threatening to painful over-acting at times (especially towards the end of the mini-series). Dominating the cast with his presence, gravitas and of course voice is Christopher Lee as Mr. Flay, the Earl's manservant who falls into disgrace and then appoints himself Steerpike's nemesis. Richard Griffiths is also notable as the head cook, Swelter, whose feud with Flay dominates the first half of the serial. Zoe Wanamaker and Lynsey Baxter also do great work as the isolated and confused Groan sisters, Cora and Clarice. Particularly impressive is Neve McIntosh as Fuschia, who plays a difficult character with conviction and succeeds in making her likable, despite her many moments of selfishness. Stephen Fry makes for a splendid Professor Bellgrove, and the mini-series is notable for one of the last appearances of the legendary Spike Milligan before his passing. Less successful is Andrew Robertson as the grown-up Titus, who lacks charisma and suffers the most from his internal conflicts not being readily accessible to the viewer.

So the production values are good and the cast - mostly - excellent. How does the mini-series fare overall? Well, it's okay. It's not brilliant, mainly due to the jarring tonal shifts. The Gormenghast novels move between comedy, farce, surrealism, gothic grotesquerie and powerful drama with ease, sometimes within the same scene. The TV show is much less successful in handling these movements, with the writing not often being up to the job (the TV show's tendency to use un-Peake-like swearing to punctuate moments of drama or comedy is obvious and dull). The comic moments tend to descend into bad farce with ease, not helped by a miscast John Sessions as Dr. Prunesquallor (he does his best and is occasionally even effective, but most of the time irritates). The compression of two 400-page novels into just four hours also sees entire storylines handled badly. There simply isn't enough time to handle the storyline of Keda and her baby and it should really have been exorcised entirely rather than shrunk into a few, highly confusing scenes. Elsewhere, Bellgrove's romance with Prunesquallor's sister may be taken from the book but it does feel like a large and unnecessary divergence from the central matters of Steerpike and Titus, and perhaps should have been condensed (to give the Keda storyline more time, as it impacts on Titus much more directly).

At the same time, when the serial does work, it works brilliantly. The flooding of Gormenghast, a highly evocative scene in the novels and one that you'd assume would not be possible to depict on a TV budget, is actually successful. Christopher Lee is awesome every time he's on the screen, and Neve McIntosh's excellent performance as Fuschia gives her character's storyline even more pathos and tragedy than in the novel (heresy!). Jonathan Rhys Meyers also seems to raise his game when in scenes with either of them, or with Celia Imrie. Gertrude is a highly unpleasant character, but Imrie plays her with total conviction and her single-minded ruthlessness, which makes her unlikable for much of the serial, suddenly becomes rather admirable when she uses it to remorselessly hunt down Steerpike.

Ultimately, the BBC version of Gormenghast (***) is unable to capture the full power of Peake's novels (no adaptation ever could), though some of the author's genius is successfully captured in fleeting moments. The excellent casting, solid production values and those scenes which really work certainly make the series worth watching, although a strong degree of teeth-grinding patience may be necessary to make it through the less successful moments (and much of the first episode, which is all over the place in quality before it starts to settle down). The series is available now on DVD in the UK and USA.
Posted by Adam Whitehead at 10:36