New York cop Max Payne is devastated to lose his wife and baby daughter in an attempted burglary. The attackers were high on a new designer drug, called Valkyr. Payne transfers to the DEA and dedicates himself to exposing the origins of the drug, going undercover in the Punchinello crime family to learn more. After three years he is called to an emergency meeting with his handler, Alex, who is promptly murdered in front of him. Max's cover is blown, he's been framed for the murder of his partner and both the police and most of the city's underworld is gunning for him. But with nothing to lose he also has an opportunity to uncover the secret his family died for, and find those responsible. 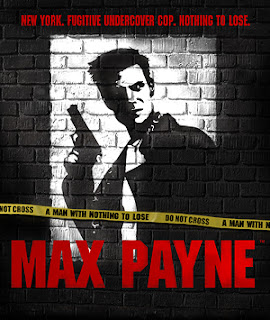 In 2001 an obscure Finnish developer, Remedy, released one of the most defining action games of all time. Max Payne had been in development for four years, an unheard-of amount of time for the period, as Remedy attempted to get the game's tricky mix of film noir storyline, John Woo-inspired action and a new gameplay mechanic called 'bullet time' (in which time slows down to a point where individual bullets can be seen in motion) to gel together. Other events outpaced the game's gestation: development was effected by the release of The Matrix in 1999, which popularised bullet time on a huge scale and led to the introduction of several homages to the film in the game. The game's lengthy development was likened to that of Daikatana (the most colossal disappointment in the history of gaming), which did not bode well, especially as Max Payne's development was actually longer. Fortunately, upon release Max Payne was critically-acclaimed and commercially hugely successful.


Max Payne's success can be put down to a 'perfect storm' of factors. Most important, and something that is not immediately apparent until you've gotten further into the game, is its knowing sense of black humour and self-referential metacommentary. The game knows it's a somewhat daft shooter and has a lot of fun with the concept. At one point, in a drug-induced hallucination, Payne convinces himself he is in a computer game and is horrified at the idea that his life has been reduced to the repetitive action of shooting whilst flying through the air in slow motion. At another point, two bad guys engage in a debate over the merits of bullet time as a cinematic device (which is usually - fully ironically - followed up by you killing them in bullet time). The game even channels Austin Powers in a sequence where a goon muses to his friend how he hates being dismissed as a faceless minion when he has two children and a loving wife and has been reduced to taking money in return for performing violence acts as a result of an uncaring society (Payne's reaction is to blow him away regardless, naturally).

However, the game then has to walk the tightrope of tonal dissonance. Whilst maintaining its black sense of humour and self-awareness, it also has a very dark and serious storyline at its heart. The game opens with a flashback to the murder of Max's wife and child, in a sobering and depressing level. Then we flash forwards to the present day, but Max's mind remains locked in that house and in that time. On one occasion Max is captured and beaten, and he returns to that house in a dark nightmare sequence. Far worse is a drug-induced fever later on, when the walls stretch out to infinity and he has to find his way through an endless dark chasm, following trails of blood and the screams of his wife and child. It's one of the more disturbing things I've seen in a game (still) but it works by showing us that the game's central protagonist is seriously psychologically damaged and obsessed by an event that he urgently requires closure on. Hence the increasingly insane lengths Payne goes to as the game progresses as he seeks an explanation and then revenge. There's also Payne's rejection of the notion that he is a hero and that he is acting from altruistic motives: at one point he destroys evidence that could have helped clear his name, simply because he has no interest in anything outside of his desire for revenge. Thus the game's storyline and characterisation (often tacked-on excuses for violence) are key in propelling the whole thing forwards and involving the player in the action.

The game's approach to action is almost sublime. Many games require you shoot people, but few do it was much elan as Max Payne. Bullet time allows you to place your shots with more precision than any game before (and almost any since, bar its own sequels), whilst the selection of weapons available is impressive. The game has no truck with stealth or cover systems. If you don't enter a new room by flying forwards in slow motion through the door with two machine pistols extended in front of you read to fire at all times, you're doing it wrong. You need to be on your toes as enemy AI is strong (they're pretty good shots), although a fair few of their combat actions (such as throwing grenades) are scripted, and thus can be avoided easily if you reload a failed mission. There's a variety of enemies, including several 'bosses' (although they are only mildly tougher than standard enemies), but in a mildly genre-subverting move, the end-game boss is a fifty-year-old woman who has no particular special skills or abilities (though you do have to be smart in how you bring her down).

Graphically, the game is a mix of two halves. Environmental graphics remain very solid and there's some great moments as bullets crash into masonry and chunks of it are blown out in clouds of white powder. Muzzle flares and explosions are vivid and the fact that you can see individual bullets (or clouds of bullets from shotguns) flying through the air in bullet time remains impressive. However, the character models are blocky and look mildly ridiculous close-up. Animation is also stodgy, with the lack of moving mouths on talking characters (something already pretty common by 2001) being surprising. Overall, the game looks perfectly acceptable for such an old title and remains fully playable today. 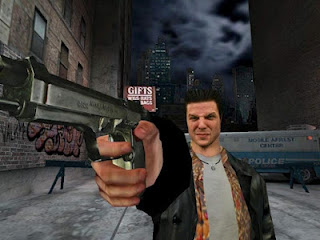 In terms of writing and dialogue the game is almost beyond description. Payne has a constantly-running monologue about what's going on in comic book-like cut scenes which interrupt the action at frequent (sometimes too frequent) intervals. The problem is that Payne has clearly severely overdosed on Bogart movies and Chandler novels and his narration is extremely cheesy:


"The sun went down with practiced bravado. Twilight crawled across the sky, laden with foreboding. I didn't like the way the show started, but they had given me the best seat in the house, front row center."


"Collecting evidence had gotten old a few hundred bullets back. I was already so far past the point-of-no-return I couldn't remember what it had looked like when I had passed it."

And sometimes, gloriously, the writing goes on an extended trip around Planet Strange and explodes through cheese and corn into something that defies rational explanation:


"The Brooklyn riverfront was a maze of rusty containers, sharp-boned cranes looking up from the snowstorm. On a night like this you couldn't help but think of the dark army of dead men, sleeping with the fishes, cement shoes in line. No minotaur lurked in this labyrinth, but somewhere out there, on the clanking deck of his cargo freighter, the skipper of the Charon was waiting, like the ferryman of the river Styx."

However, even the worst dialogue in the game seems to work through the delivery of voice actor James McCaffrey, whose beyond-world-weary, cynical tones perfectly fit the character and help sell his attitude to the player. Slighly less successful are the character models for the cut scenes, which (due to a budget tightening towards the end of development) are basically the developers and their friends and families rather than professional actors. Max Payne himself is based on the game's writer. Oddly, the amateurishness of these scenes is more endearing than disastrous, and adds to the totally barmy nature of the game.


Ultimately, Max Payne works because it's a perfectly-executed action game with a thoroughly-developed central character and a knowing black humour about its own nature (without ever disappearing up its own posterior). Where the game falters is towards its end, when the thematic and character arcs are not brought to as satisfying a resolution as the revenge plot. Payne achieves some of his objectives, but is still left as a battered, traumatised person. It falls to Max Payne 2: The Fall of Max Payne to provide the resolution for Payne's character that is required.

Max Payne (*****) remains, eleven years on, an engrossing and impressive game, mixing together a variety of ideas and different tones into an entertaining whole. The game can be purchased from Steam for PC now, and is also available on PlayStation 3 (USA) and on iOS devices. Max Payne 2 is also available now. Max Payne 3 will be released imminently on PC, X-Box 360 and PlayStation 3.
Posted by Adam Whitehead at 20:25

One of the best shooters of all time. I'm a bit wary of Max Payne 3 because it seems to dispsnse with the 1970s New York noir setting which was as much of a character of the first two games as Max. By the way, the 'cheesey' Bogart-like dialogue was one of the things I love most about these games.

I downloaded a seemingly complete port from the App store for my IPad. I haven't played all the way through; however, the first levels do seem to be identical to the original and all for £1.99.

Mind you I would rather have a mouse and keys rather than the directional stick on the iPad.

I don't know, I have no problem getting into these quotes, to some extent. Of course, a bit of indulgence is part of the fun of that style.