TORMENT update: Rothfuss and Avellone in

The Kickstarter for Torment: Tides of Numenera is roughly halfway done, with 14 days to go before the end of the appeal. However, the game is already funded: having asked for $900,000, inXile Studios have actually received $2.9 million. The game is now deep into what Kickstarter calls, 'stretch goals', that is additional incentives for people to keep funding in the form of added content to the game. 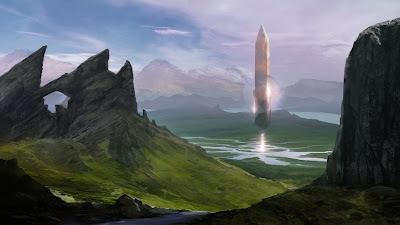 First up, if the game hits $3.25 million then the writing team will be expanded to include bestselling fantasy author Patrick Rothfuss (The Name of the Wind, The Wise Man's Fear). Rothfuss will be adding about 10,000 words of content to the game in the form of dialogue and characters. He won't be doing any more because of his commitments to finishing off The Doors of Stone, the third and concluding volume of The Kingkiller Chronicle.

Much more enticing (to this blogger, anyway) is that at $3.5 million, inXile will add Chris Avellone to the writing time. Avellone was the primary writer and designer of the original Planescape: Torment (to which Numenera is the spiritual successor), as well as Fallout 2, Neverwinter Nights 2: Mask of the Betrayer and the forthcoming Project: Eternity. He also worked on Icewind Dale and its sequel; Fallout: New Vegas (including leading the design of several of its DLC episodes); and Alpha Protocol. He has also done some writing for inXile's previous Kickstarter game project, Wasteland 2. He is often cited as the finest writer of Western CRPGs. Exactly why Avellone still hasn't written a novel, I don't know, as I suspect it would be awesome. Avellone will be creating a new NPC character for the game and writing their dialogue, but will also be serving as an editor and a fresh pair of eyes on the work of the rest of the team as well.

With still two weeks to go, I suspect this Kickstarter will breeze past both targets and probably end up somewhere on the other side of $4 million when all is said and done. It's shaping up to be a very interesting game.
Posted by Adam Whitehead at 15:24

Surely, they're not in yet? It says that they've collected $3,016,578 so far. So there's still ways to go before Rothfuss and Avellone join the team.