WARCRAFT movie will not be based on WORLD OF WARCRAFT

Director Duncan Jones has revealed some information about the upcoming WarCraft movie at the recent BlizzCon event in California. The most notable is that the movie will not be based on World of WarCraft, but will instead reach back to the origins of the WarCraft franchise. 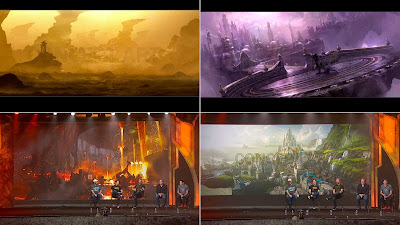 The film will pit humans and orcs against one another. The human faction will be led by Anduin Lothar, whilst Durotan (father of Thrall) will command the orcs. Those savvy with WarCraft lore will recognise these names from the 1995 game WarCraft II, in which they played important roles. According to Jones, the movie will present the POV of both the orcs and humans rather than suggesting that one is good and the other evil.

Draenor, Dalaran, Ironforge and Stormwind are the locations for which Jones showed off concept art. Bill Westenhofer, the head of effects, is a regular World of WarCraft player and says that he often logs into the game to drawn on actual locations and environments for inspiration. There is also an urge to do as much as possible in-camera rather than using CGI: the preference at the moment is to use prosthetics for the orcs, for example.

The WarCraft film is currently in active pre-production and will start shooting in Vancouver in early 2014. The film will be released on 18 December 2015, when it will face off against Star Wars: Episode VII.

Blizzard have also confirmed that they are working on new versions of WarCraft: Orcs and Humans, WarCraft II: Tides of Darkness and WarCraft II's expansion pack, Beyond the Dark Portal, which will be compatible with modern PCs.
Posted by Adam Whitehead at 18:14

Email ThisBlogThis!Share to TwitterShare to FacebookShare to Pinterest
Labels: blizzard, duncan jones, news, this will probably suck but you never know, warcraft, world of warcraft

I don't even play WarCraft, but I'm excited by this simply because Duncan Jones is a really good director, his conceptualizations on this movie sound really solid (not making the Orcs the bad guys? EXCELLENT!) and trying to work for in-camera effects makes me VERY happy. We need more that, less CGI.

Hmm, I didn't discover Warcraft until WoW, but this should be interesting. Playing the original Warcraft movies might be as well, if I could just grasp RTS...

I'm not sure about that. WoW is far popular than Warcraft II and even if they want to start the story at the beginning, then the treatment of the story is wrong. In Warcraft II, the humans were clearly the good guys and the orcs the bad guys.

Moon was excellent so I'm disappointed he's directing what looks like really generic, cliched fantasy. I mean Orcs? Really? What next, Dwarves and Elves?

nice one anon, seroously? the orcs ARENT EVIL. and the humans arent ANGELS. got it.