Half a King by Joe Abercrombie

The abrupt death of his father and elder brother puts Prince Yarvi on the throne of Gettland. It's not something he ever wanted: born with only half a hand, he's spent his life training to become a Minister, a man of learning and science. Thrust onto the throne, Yarvi must instead take up the sword to avenge his dead kin and defeat his kingdom's enemies, from within and without. 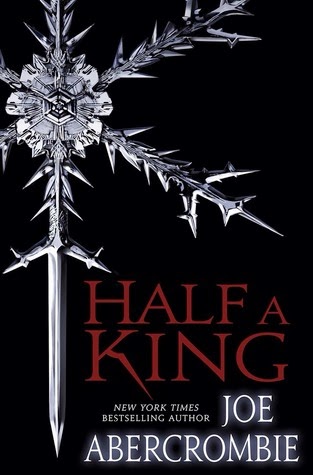 Half a King is the first novel in a new trilogy by Joe Abercrombie. It's also his first novel for a new publisher and the first set outside his signature First Law world, not to mention his first Young Adult novel. It's a change of gears for the British author, and there's a fair bit riding on how he manages to pull it off.

Those hoping for a radical change in direction or prose style will be disappointed, though conversely those hoping he'd stick doing at what he does best will be overjoyed. This is still very much a Joe Abercrombie novel, meaning there's an air of both cynicism and humour to proceedings and there's a fair amount of violence. There isn't much swearing and no sex at all, but beyond that the only way you'd know this was a YA novel is because the author said so on his website.

The main character is Yarvi, initially presented as a crippled, intellectual man forced to exist in a society where valour with a sword or axe is praised above everything else. Yarvi is constantly on the back foot until put into a situation where his wits and education can be used to the mutual benefit of himself and a band of companions. Abercrombie paints deftly the relationships between Yarvi and his new companions, such as the enigmatic swordsman 'Nothing', the master navigator Sumael and the bowman Rulf, fusing them into a genuine fellowship over the course of many trials and adventures: a harsh overland march through a frozen, barren wasteland is particularly vivid. Working with less than half the word-count of any of his previous books, this is also his most concise, focused novel to date.

The benefit of that is that there are not many wasted words and the story moves extremely briskly. The downside is that the worldbuilding doesn't get as much of a look-in as it sometimes needs to. My review copy didn't have a map and it doesn't look like the final version will have one either, which is a shame because the geographical interrelationships between the various kingdoms of the Shattered Sea and the northern wastes from where Yarvi has to make his overland journey are not strongly presented in the text. Characterisation outside of the central group is also a little vague: the machinations and plots of the main villain seem a bit random without further exploration of his character. These issues mean that Half a King does not satisfy as much as a complete package as Abercrombie's prior novels.

However, whilst this is the opening of a trilogy it is surprising that Abercrombie is able to bring as much closure as he does to the novel. There are still loose ends to be addressed in the sequels, but there are no cliffhangers. Given the relatively rapid release schedule of the trilogy (the second volume is due at the start of 2015), Abercrombie could have been forgiven for adopting a more serialised approach than he does.

Half a King (****) is in many ways vintage Abercrombie: action-packed with a vividly-told plot and characterisation is which straightforward on the surface but gives way to hidden depths underneath. The concise page count makes for a focused story but also doesn't leave much room for deeper explorations of the world. Still, this is a fast-paced, gripping story with a few nice twists. The novel will be published on 3 July in the UK and 8 July in the USA.
Posted by Adam Whitehead at 14:29

Email ThisBlogThis!Share to TwitterShare to FacebookShare to Pinterest
Labels: half a king, joe abercrombie

I suspect that vintage Abercrombie is exactly what a lot of readers will want, nothing less and nothing more. Even if its in a YA package, so to speak. :)

Quite an excellent read, I was worried when this was announced as YA. Got lucky and got a review copy through my workplace, I'll pretty much second your points. Apart from the huge font size and general lack of sex (which is logical due to the age of the antagonist), I'd never have guessed this was YA.

Hmm, good to read, Adam. I've been curious about Half a King but, I'll freely admit, the YA tag has had me hesitant. If it's just the lack of profanity/obscenity that makes it YA, but still feels like an Abercrombie book, I might give it a chance.

It's Joe Abercrombie's "Twilight" with large print and no difficult words or adult situations. What's not to love! OOh I hope there is some sexy vampires in it ! or sexy and hunky werewolves !

Sex in a YA book? What an idea . Sex is something teenagers have no interest in, or knowledge of, or ever get into.
Besides, Abercrombie sex scenes are probably the strongest argument for celibacy you could come up with.