WorldCon 2014, to be held in August in London, announced earlier today that British comedian, talk-show host and celebrity Jonathan Ross will be acting as Master of Ceremonies for the Hugo Award Ceremony. An extraordinarily negative reaction to this decision followed via Twitter and Facebook, resulting in Ross withdrawing before I even had time to finish writing this blog post. 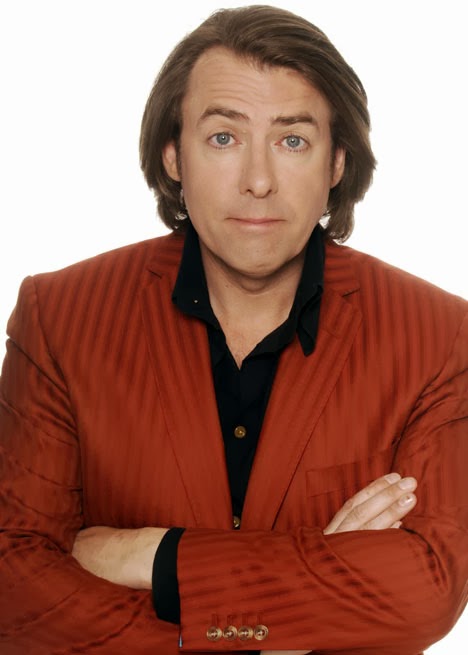 For those not in the know, Jonathan Ross is probably our closest equivalent to an American interviewer like Jay Leno or Conan O'Brien. His Saturday night ITV chat show pulls in 3 million viewers a week or more. Ross is also noted for his geek-friendly views. He is a big fan of TV shows such as Game of Thrones and has championed things like anime, video games and horror movies which other TV commentators would not touch with a bargepole. Ross is also married to scriptwriter Jane Goldman, who co-wrote the movies Kick-Ass, X-Men: First Class and Stardust, and has himself written several comic books.

However, the controversy stems from Ross's brand of comedy, which is often confrontational and relies on stereotypes. His humour has been categorised as sexist and occasionally borderline racist (most notably making remarks about the differing skin colours of Madonna and an adopted baby, to her face). Most famously, Ross and fellow comedian Russell Brand got into serious trouble for leaving sexist jokes about the granddaughter of actor Andrew Sachs on his answerphone during a radio show, although they both later apologised. Some of Ross's comments to female guests on his talk show also rely on crude sexual humour a bit too often (one interview with Gwyneth Paltrow in particular seemed to devolve into rather unpleasant sexist jokes quite quickly).

In the interests of balance, Jonathan Ross has also stood up for equal rights in the past: during his BBC morning radio chat show, he made scathing comments about the BBC's lack of ethnic representation amongst its television and radio presenters, comments that could have cost him his job.

For the purposes of hosting the Hugo Awards, I can understand why LonCon decided it'd be a good idea to employ Ross (though it should be noted that he is not being paid). Ross is a huge, bona fide celebrity. It'd raise the profile of the Hugos and Worldcon in the UK more than almost anything else would, and would ensure wider newspaper and television coverage. Ross is certainly one of us, as his personal, extensive collection of vintage toys, games and comics should attest. But he's also a divisive comedian, one whose humour seems to rely too much on belittling others, often on the grounds of gender or sexuality; almost certainly not from some deep-seated prejudice, but more a lazy reliance on obvious sources of humour.

With the other battles SFF fandom is fighting at the moment in trying to make the genre fairer and more inclusive, this was never going to be a popular choice. Indeed, it is impressive how this decision unified almost everyone against it, with multiple fans, authors, editors and attendees suggesting they would boycott the convention and demand refunds if it went ahead with Ross in place. Indeed, one of LonCon's own committee members had already resigned over the issue. Charles Stross also pointed out that inviting someone whom the tabloids are actively trying to attack at every turn is a bad idea regardless of anything else they may say or do.

Even before I finished writing this blog post, LonCon announced that Ross had withdrawn from hosting the event. This is not surprising given the response on social media. However, I think the original idea of getting a well-known, high-profile celebrity to do the job was the right one. I'd love to see someone like Charlie Brooker (an increasingly high-profile British TV personality and writer of the critically-acclaimed Black Mirror SF series), Mark Gatiss (an actor/writer/director/producer on numerous SF projects) or, indeed, Jane Goldman, do the job. It'll be interesting to see who the replacement is.
Posted by Adam Whitehead at 17:55

None of the blogs or commentaries on this storm in a teacup have mentioned the salient fact that whatever else, Ross would at least have guaranteed an entertaining presentation. I wonder which anodyne face the organisers will choose in his stead.

Actually, one of my complaints would be that Ross is now well past his best. Ten years ago there wouldn't have been an issue, as his comedy back then wasn't nearly as reliant on abusing stereotypes and so on.

For people who could do better, going by celebrities alone, they could ask someone like Professor Brian Cox, Charlie Brooker, Darah O Briain, Mark Gatiss, Jessica Hynes or Simon Pegg. Whether they'd be interested or not - the gig doesn't pay - is another matter. But certainly there's much funnier people than Ross around now in the UK.

Graham, the whole hoo-ha which has erupted shows that many people wouldn't use the words "Jonathan Ross" and "entertaining" in the same sentence. I agree with Adam's suggestion the committee could find someone similar high-profile but less divisive.

I seriously doubt any Name will touch it now. I wouldn't if I were them, far too risky.

The question isn't just "who would we like and is available" though. It's a question of who'd be a good Host (I question whether Pegg or Cox could handle a whole ceremony on his own. Ross and Dara could, because of their stand-up backgrounds. Brooker is still a niche choice, and I'm certain plenty of the Anti-Ross voices would find reasons to disparage Charlie in much the same fashion).

The other thing is, nobody you've mentioned would qualify as "The Right Kind of Fan" by WorldCon Traditionalist standards. Whatever else Ross may be, only the worst kind of Fannish Ghettoist would question his Geek Credentials.

"Whatever else Ross may be, only the worst kind of Fannish Ghettoist would question his Geek Credentials."

And yet, some have. Who would want the ceremony after seeing this reaction? I assume it'll end up being an author or WorldCon regular who will will give us an understandably dry and humourless event.

Pfft. Just seems like a shock jock to me. They're a dime a dozen in the US. He's a B-lister at that too. Not one of those things comes close to some of the things Howard Stern has done in his career, and he's found his way onto television...

Just another example of how cultural Marxism aka political correctness, has infected almost all aspects of society.

Even backward pariahs like sci-fi, videogame and comicbook nerds, probably the most un PC of all the intellectual niches in society, now have their 'leaders' too scared to be associated with bad men.

The only logical replacement, given the furor and if he would agree, would be Steven Fry.

Jonathan Ross is far from a B-lister in the UK. Considering it's LonCon he's a pretty big deal. Although I can see how the rest of the world may be shouting "who?"


The wishlists presented here seem to be assuming they'd all do it for free. As others have also said, I think the majority would be hesitant to take part as they know it only takes a handful of SFF people to launch a smear campaign against them. Seems like too much grief for a free gig.

Still the whole mess generated far more publicity about the Hugos and Loncon than anything else so far.